This area marks the site of the lynching of Rubin Stacey on July 19,1935. Stacey was lynched based on the accusation of Marion Jones, a white, female resident in Fort Lauderdale, FL. Rubin Stacey was a 37 year old tenant farmer, who knocked on the door of Marion Jones for a glass of water one hot, summer day. After allowing him into her home, Jones accused Stacey of pulling a knife on her and was immediately taken into custody. As he was being transported to the nearest jail in Dade County, it is reported that a mob of masked men “kidnapped” Stacey from the hands of the county sheriffs and led him down Ole Davie Road, now Davie Road. Located closely to Mrs. Jones’ house, the mob of approximately 20 men, women, and children watched as Stacey was hung from a pine tree using a wire clothesline from Jones’ home. The mob then engaged in taking turns in shooting him multiple times as he was suspended. The lynching occurred around 4:30pm. Upon his death, members of the crowd took pieces of Stacey’s clothing, pieces of the wire, and fragments of the pine tree for keepsake to commemorate the moment, and his body was not let down until approximately 7:15pm by a Black gravekeeper. Almost 50 years after the lynching, the Florida Sun Sentinel recollected the day by interviewing a women who witnessed and participated in the gruesome act. She recalls that the “kidnapping” of Stacey was less of a kidnapping and was supported by more officer involvement than previously reported. She recounts that it was Deputy Clark that brought Stacey to the road that would lead to his ultimate demise, yelling expletives and encouraging the crowd's participation in shooting Stacey. Upon the investigation of his death, the then-current Florida Governor Dave Scholtz and State Attorney Marie were prompted to have an honest investigation about the lynching. However, when the Sheriff was called to appear before the grand jury, he claimed that the doing was not his, but was that of 100 masked men that ran him off the road. He asserted that by the time he found Stacey, he was already hanging from the pine tree. The grand jury took his word at face value, the case was essentially closed, and Sheriff Scholtz received no legal punishment for his involvement. However, the legacy of Rubin Stacey continued to unfold as a photograph of his lynching, surround by smiling white children, was used by the NAACP to support the Costigan-Wagner Bill. His photo on the flyer was preceded by the following words: “ Do not look at the Negro. his earthly problems are ended. Instead, look at the seven white children who gaze at this gruesome spectacle. Is it horror or gloating on the face of the neatly dressed seven-year old girl on the right? Is the tiny four-year-old on the left old enough, one wonders, to comprehend the barbarism her elders have perpetuated.” The Costigan-Wagner bill centered around an anti-lynching policy and eventually reached the attention of President Roosevelt. Although the bill was ultimately vetoed, Stacey’s senseless death helped create traction about the issue as a whole. 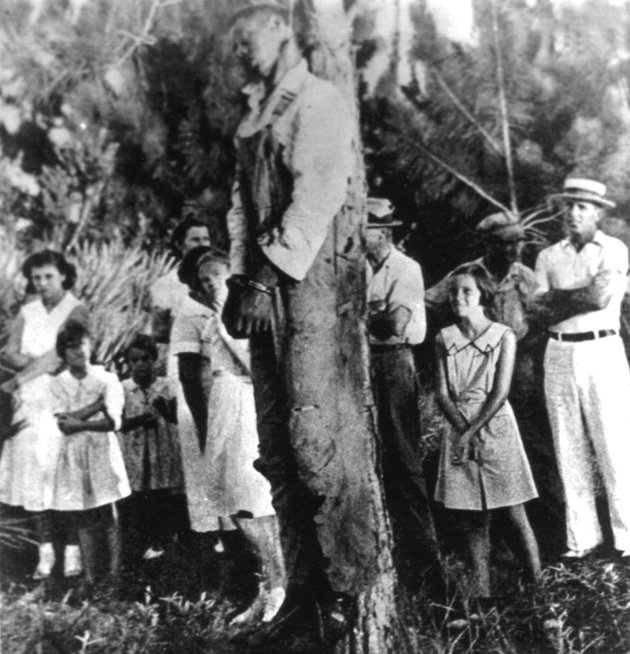