Erected in 1996 and sculpted by Raymond Sandoval, the Tamanend Monument honors the Lenni Lenape American Indian Tamanend, one of the Sakimas (or leaders) who greeted William Penn in 1682 and agreed to a peace treaty with him the following year. Considered the "patron saint" of America by Pennsylvania colonists, Tamanend was honored with a holiday and the ringing of bells every May 1st in Philadelphia prior to Independence [3]. 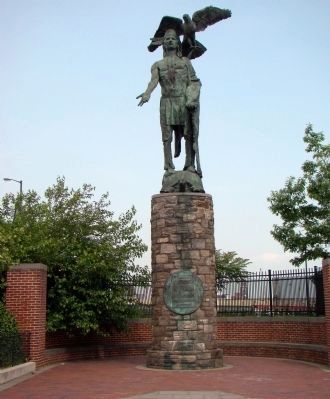 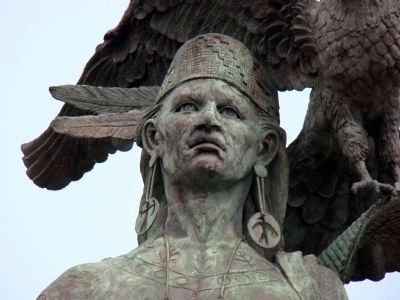 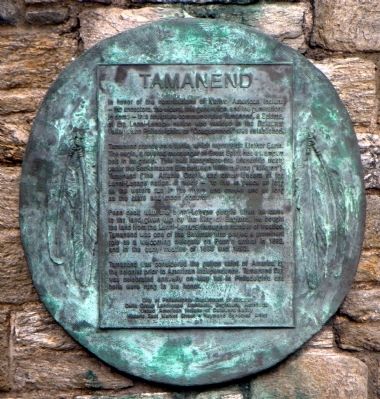 Erected in 1996 and sculpted by Raymond Sandoval, the Tamanend Monument honors the Lenni Lenape American Indian Tamanend, one of the Sakimas (or leaders) who greeted William Penn in 1682 and agreed to a peace treaty with him the following year. Considered the "patron saint" of America by Pennsylvania colonists, Tamanend was honored with a holiday and the ringing of bells every May 1st in Philadelphia prior to Independence [3].

The Lenape (or Lenni Lenape, meaning "Original People" or, literally, "Men of Men") are thought to be the "tree trunk" of the Algonquin-speaking North American Indian Nations, from which many other tribes branched off, including the Nanticoke, Shawnee, and Mohicans, many of which refer to the Lenni Lenape as the "grandfathers" or "ancient ones" [1; 2]. The Lenape Confederation settled along the Delaware River, extending from the headwaters of the Hudson to the headwaters of the Potomac and were divided into three geographic/dialect groups: the Munsee (People of the Stony Country) in the north, the Unami (People Down River) in the center, and the Unalachtigo (People Who Live Near the Ocean) in the south. Though Lenape warriors were feared by other tribes, their reputation centered less on battle than on mediation, diplomacy, hospitality, and peacekeeping. The Lenape were a densely populated, matrilineal, monotheistic society, and were referred to by Europeans as the "Delaware Indians" beginning in the early 1600s [1; 2].

When the Dutch, Swedes (see Queen Village), and Finns colonized land along the Delaware River in Lenape territory in the 17th century, European diseases decimated the Lenape population. War erupted between the Dutch and Lenape in 1639, and although New Sweden Governor Johan Printz wished to eliminate the Lenape (in part to take over their role trading with the Pennsylvania Susquehannock) in 1644, the Swedes and Lenape never went to war, and eventually signed a Friendship Compact in 1654 at Tinicum (in present-day southwestern Philadelphia), only a year before New Sweden fell to the Dutch [1; 4]. The Dutch, in turn, fell to the British in 1664, by which time the Lenape population had been reduced by up to 90% over the course of 20 years due to disease. Between 1664 and 1740, both voluntary and forced migration of Lenape and Nanticoke peoples took place, bringing the Nanticoke (Tidewater People) from Maryland into New Jersey, many of the Lenape northward and westward of their traditional homelands, and many confined to the Chicone, Broad Creek, and Indian River Reservations (established by British colonial governments as early as 1704) and later, the Brotherton Reservation in New Jersey [1; 2].

Some Lenape remained in colonial towns, including what would become Philadelphia [1; 2]. When William Penn was granted the territory of Pennsylvania, he was greeted by a Lenape delegation, including Tamanend, with whom he signed a peace treaty in 1682 [3]. In the same year, the city of Philadelphia was founded [2; 4]. Penn and the Lenape maintained good relations, in spite of British encroachment on the Lenape homeland. During the French and Indian War (1754-1763), the tribe took various sides in the conflict, some fighting with the British, some against, and some neutral [1]. The newly-created United States government, still fighting the Revolutionary War against the British, signed its first treaty in 1778. The treaty promised the "Delawares" their own state if they would join the U.S. against the British forces. Though the Lenape did, in fact, fight alongside the Revolutionaries, they were never rewarded as promised. European expansion led to conflicts, deaths, and forced removals instead. Some Lenape adapted by become farmers or tradesmen. In spite of the challenge of such adaptation to their traditional culture, a tribal community was maintained, often via Lenape and Nanticoke Christian congregations. Not until 1924 would American Indians be considered citizens of the United States, and not until 1978 was their legal right to practice their own religion enacted. In the same year, the Nanticoke and Lenni-Lenape joined together as both a united tribe and a non-profit community agency for "educational, social, and cultural purposes, to promote the welfare of Native Americans who reside in the Delaware Valley," based in New Jersey [2].

In honor of the contributions of Native American Indians—the ancestors, the elders, this generation, and the generations to come—this sculpture commemorates Tamanend, a Sakima, of the Lenni-Lenape nation who resided in the Delaware Valley when Philadelphia, or “Coaquannock” was established.

Tamanend stands on a turtle, which represents Mother Earth. The eagle, a revered messenger of the Great Spirit has a wampum belt in its grasp. This belt recognizes the friendship treaty under the Shackamaxon Elm between William Penn (“Mikwon”), Tamanend (“the Affable One”) and other leaders of the Lenni-Lenape nation. It reads—“to live in peace as long as the waters run in the rivers and creeks and as long as the stars and moon endure.”

Penn dealt with the Lenni-Lenape people when he came to the land given him by the King of England. He bought the land from the Lenni-Lenape through a number of treaties. Tamanend was one of the Sakimas who played a prominent role as a welcoming delegate on Penn’s arrival in 1682, and in the early treaties of 1683 and 1692.

Tamanend was considered the patron saint of America by the colonists prior to American Independence. Tamanend Day was celebrated annually on May 1st in Philadelphia and bells were rung in his honor.