The oldest officially-sanctioned bowling alley in America, the Holler House dates back to September of 1908 when it was opened by Thomas Szewczykowski. The same family continues to operate the lanes, although they now go by Skowronski, a more Americanized version of their patriarch's last name. The historic lanes are still operated by manual pinsetters. The building and lanes have been well-maintained and the walls of the establishment are covered with historic images, artifacts, and some of the original décor. For example, there are posters and newspaper clippings related to the Allied victory in World War I-an event that happened a decade prior to the first game at the bowling alley started by homas Szewczykowski.

The exterior of the Holler House 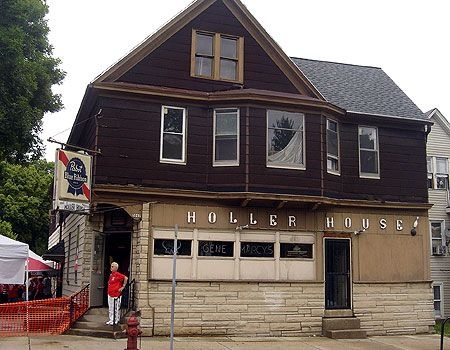 The Pinboy that resets the pins between frames 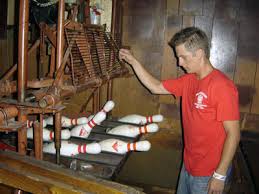 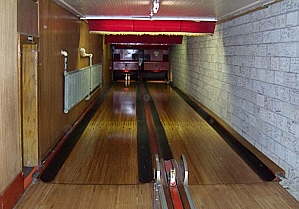 In the upper floor of the Hollow House, one would find the typical Wisconsin bar scene.  Sticky floors and good music along with good food make it already one of the better places to eat and drink for the locals there.  The Holler House is on the South side of town and has been owned by the Skowronski family since its opening in 1908.  The bartender there now is 87 years old.  She married into the Skowronski family in 1952 to Gene Skowronski.  Ever since Gene’s death she has operated the bar by herself.

The bar is known for a certain tradition that began almost 50 years ago.  Marcy Skowronski was drinking with some of her friends before they all decided to throw their bras up onto some skis in the bar.  Ever since, women who come there for their first time are encouraged to leave their bra hanging up in the bar.  As you can imagine, the bar is filled with hanging bras now even though the city tried to have them taken down as it was a fire hazard.

The basement is where all the history is.  The country’s oldest bowling alley is down there with the original wood on the lanes that was used to make it.  Patrons of the bar can go down there and bowl a game for 4 dollars per person.  The lanes are oiled with a spray can and the pins are reset by a pinboy mannually between frames.  The pinboy is tipped by the bowlers; usually about 3 dollars per game.  The basement is lined with pictures and artifacts that reveal its history and take bowlers back in time.

The bowling shoes all lie under the stairs in a jumble and there are usually no chairs available down there.  The bar also only serves beer in bottles with the exception of Schlitz cans.  Despite all this, it was named one of the best bars in America by Esquire magazine.  Some famous faces have bowled there.  Jason Belmonte and David Garber have even tried the lanes!  It would make a great stop for any bowler or any fan of bowling.

4 p.m. until close every day except Monday.