In 1936, officials in Charleston, West Virginia proposed a bold solution for paralyzing traffic jams that clogged city streets. The plan called for a substantial upgrade of existing routes on either end of the city, and to connect them with a boulevard bypass through the city that paralleled Kanawha River and averted the most heavily congested streets. Kanawha Boulevard was a massive New Deal public works project that transformed a narrow tree-lined road into a modern multi-lane highway that permanently altered the city's skyline. 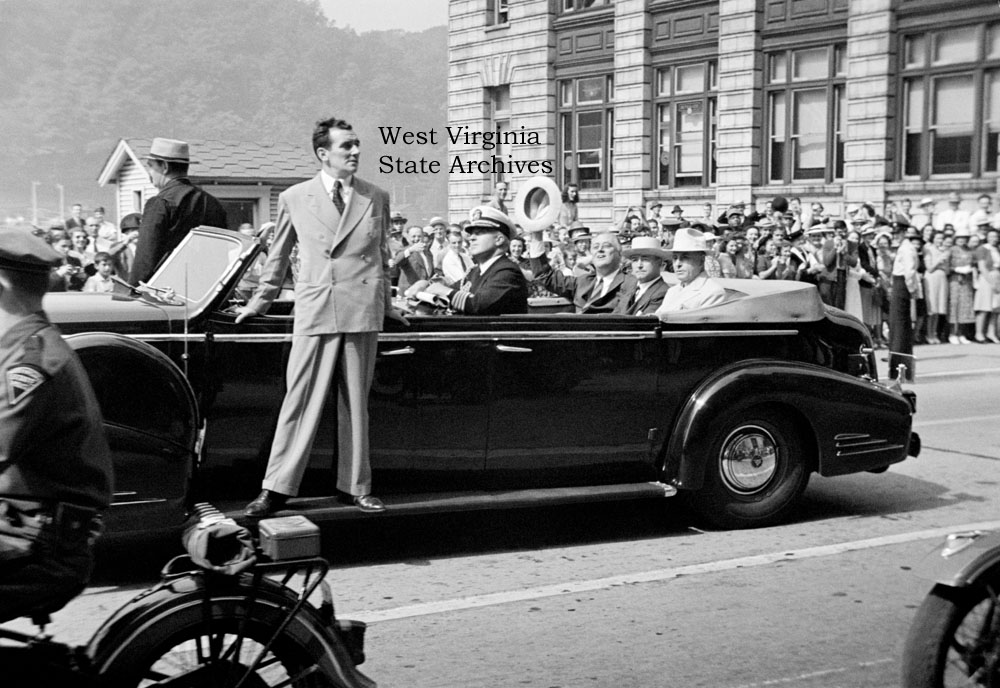 Despite being mired in the Great Depression, the population of Charleston, West Virginia rose from 60,408 in 1930 to 67,914 by 1940. With more people came a corresponding increase in the number of motor vehicles using city streets. Auto, bus, and truck traffic clogged the downtown area and frequently created gridlock, a situation made worse during shift change at the Kelly Axe factory located at Patrick Street on the West Side and Libby-Owens-Ford glass plant situated along MacCorkle Avenue in Kanawha City.
In 1936, city leaders proposed a substantial upgrade to existing routes on either end of the city, and to connect them with a downtown bypass that averted the most heavily congested streets. The scheme actually involved four separate improvement projects. First would be the construction of a four-lane cut-off route from Dunbar to Kanawha Two-mile Creek, where the heavily traveled Point Pleasant and Ripley-Parkersburg roads (U.S. 35 and U.S. 21, respectively) joined at Washington Street (near present Orchard Manor on Charleston’s West Side). Next would be a new multi-lane bypass road extending the length of the city and situated along the north bank of Kanawha River. This massive earth-moving project would necessitate removing all extant structures from the south (river) side of Kanawha Street, depositing millions of tons of earthen fill to create a broad 40 foot right-of-way, then adding massive amounts of stone rip-rap to stabilize the shifting riverbank over which the new route was laid. The third portion of the project involved construction of a new bridge to carry the multi-lane bypass over Elk River at its mouth. Finally, the bypass would link to an upgraded segment of the Midland Trail (U.S. 60) east of downtown Charleston. When completed, these four projects would create a continuous 14-mile boulevard stretching from Dunbar to Malden.
Other major metropolitan areas had successfully implemented similar projects to alleviate traffic woes and create an aesthetic parkway concept, such as Detroit's 12-mile Grand Boulevard (1913) or Connecticut's 37-mile Merritt Parkway (1934-40) built from Greenwich to the Housatonic River in Stratford. However, undertaking such a grandiose transportation plan was unprecedented for a West Virginia locale. In Charleston, a group known as the West Side Business Men's Association played a significant role in conceptualizing the local plan and combining the various elements into one comprehensive project descried as “breathtaking in its scope.” Funding for such an ambitious undertaking in the midst of the Great Depression required a partnership between FDR's Public Works Administration (PWA), a New Deal agency which provided partial funding through federal grants, and the City of Charleston which proposed a bond issue to make up the balance of the project costs.
Construction funds first became available in August 1937 after the Roosevelt administration approved a $450,000 PWA grant to partially cover the costs to erect a 500-foot bridge over Elk River, which consulting engineer C.P. Fortnoy  claimed to be longest continuous girder span in the world. Requests for bids on the bridge were delivered from the PWA regional office in Chicago in mid-December 1937, and the bid opening occurred on January 6, 1938. By March of that year the city had acquired all rights-of-way for the bridge project, except for one parcel owned by the Dickinson family along Elk River. Workers poured the first concrete in mid-April 1938, and in August of that year the center span was raised.
Charleston residents went to the polls on September 19, 1938 and approved by a 7 to 1 margin $2,040,000 in low interest bonds (equal to $34.3 million in 2016 dollars) to match federal PWA grants for five projects, including proposed bypass. Despite the fact that the nation remained mired in the Great Depression, Charleston residents overwhelmingly supported the expenditure of public funds for this major highway project. At about the same time, officials decided the new parkway would be called Kanawha Boulevard.
Boulevard construction began in 1938 with the initial purchase of property rights-of-way. Originally, all properties that stood on the south (river) side of the old Kanawha Street from the mouth of Elk River east to city limits were scheduled for demolition to make way for the expanded roadway. This included all buildings located in the heart of downtown, including the Alderson-Stephenson Building at 723 Kanawha Street—otherwise known as the Union Building after the Union Trust Company housed there. The landmark 13-story structure had been the tallest building in the state when built in 1911, and remained a dominant feature of the city's skyline.
By June of 1939, reports claimed that the lack of funds for property purchases might necessitate leaving the Union Building standing at the south end of Capitol Street and building Kanawha Boulevard around it. Officials determined that it would not necessarily create an overt safety hazard if the city did not obtain the specified 60-foot right-of-way there, because a similar situation existed due to the nearby South Side Bridge piers. Although the piers made for a tight passage for vehicular traffic, it left ample space for four lanes of traffic. In the end, clearance was about the same width at both the Union Building and the bridge, which spared the Union Building from being destroyed to build Kanawha Boulevard. Today, the Union Building endures as a defining feature of Charleston’s skyline, and it is difficult to imagine the city without it.
Europe and the world stood on the brink of a disastrous war by the fall of 1939. However,
Charlestonians had much to celebrate because they witnessed paving of the final stretches of the new four-lane parkway. Dedication of the completed $4 million Kanawha Boulevard took place in 1940.
On September 3, 1940, President Franklin Delano Roosevelt visited the Naval Ordnance Center in South Charleston. On the return trip, he rode up Kanawha Boulevard to the South Side bridge and the C&O station, where he boarded the presidential train back to Washington. Thousands of bystanders waved to the president as his motorcade passed. According to the Charleston Gazette: "As he rode up the parkway – product of the New Deal-sponsored PWA – the president smiled and waved to the crowd, made occasional comments to Gov. Holt or Sen. Neely, and appeared to be thoroughly enjoying his trip."