Malvern Hill is one of the best-preserved battlefields in central and southern Virginia. This historic site preserves the history of the Civil War battle that occurred at this location on July 1, 1862. The Battle of Malvern Hill is also known as the Battle of Poindexter’s Farm, and involved the combined forces of over 50,000 Union and Confederate troops. Malvern Hill was the final battle of the Seven Days’ Battles and part of the Union’s Peninsula Campaign in which General George McClellan attempted to capture Richmond by landing troops southeast of the Confederate capital. The campaign failed and McClellan's troops retreated back to Washington, an event that demonstrated that the Confederacy would not be easily defeated. The battlefield contains over twenty signs that interpret the history of the battle, as well as a visitor's center, two miles of walking trails, numerous artillery pieces, the historic Crew House, and the ruins of the parsonage building from the Willis Church.

An artist's rendition of the Battle of Malvern Hill with Union warships firing in the background. 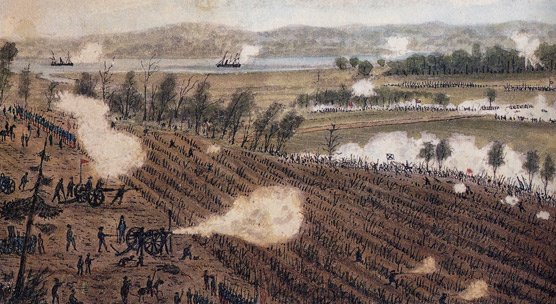 A cannon sits as silent sentinel over the battlefield. 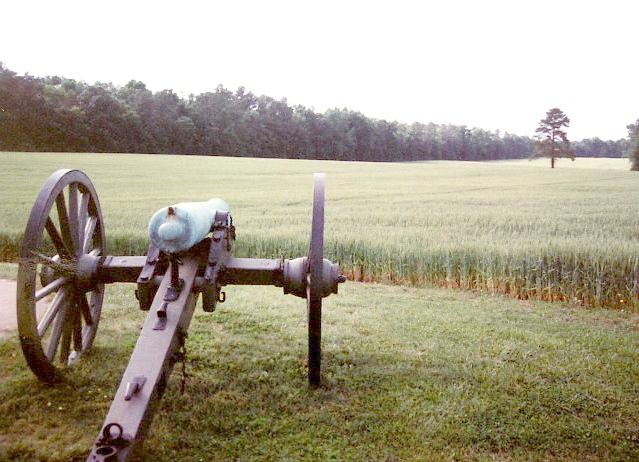 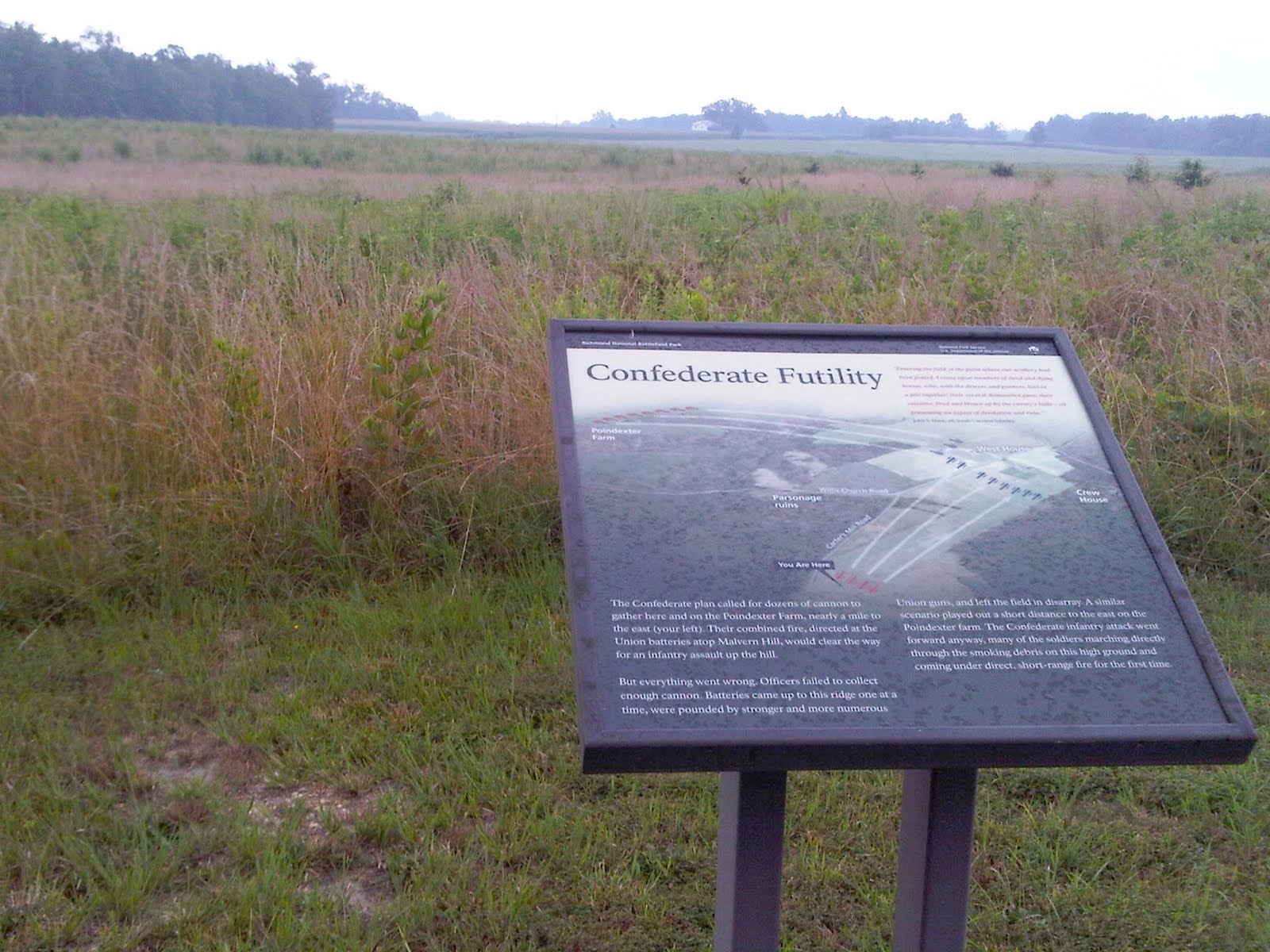 A battlefield map of Malvern Hill. 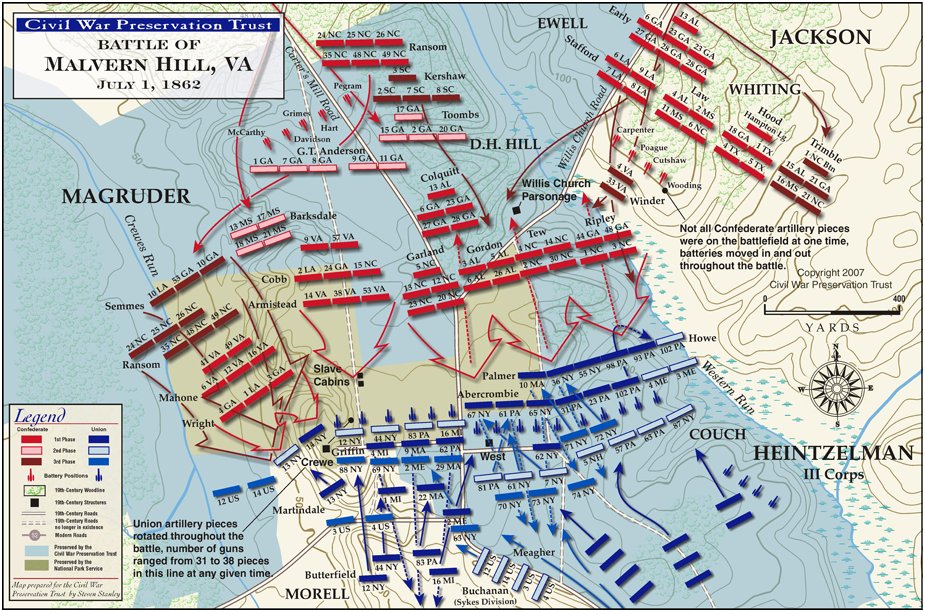 Learn more about the Peninsula Campaign with this book from the University Press of Mississippi. 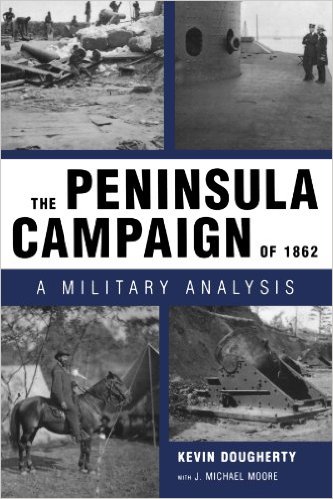 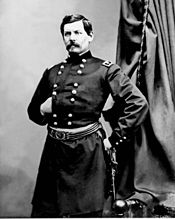 An 1864 anti-McClellan presidential cartoon about his fleeing to Union ships prior to the Battle of Malvern Hill. 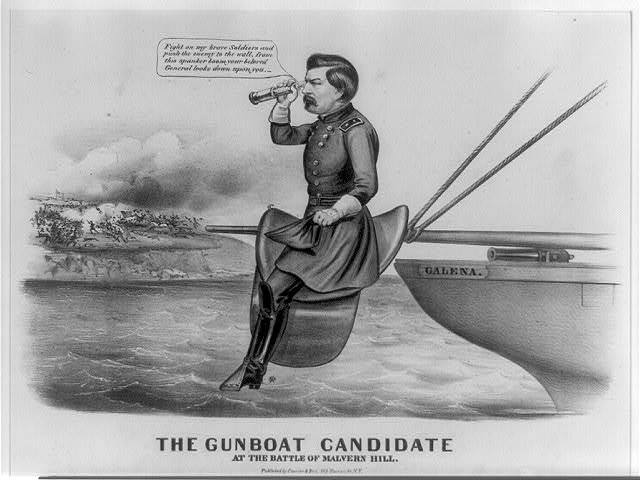 Great lengths have been taking to restore this battlefield to match its appearance in 1862.  Visitors can take in the same sweeping vistas of open fields that both Union and Confederate soldiers did on the day of the battle.  The walking trail follows the advance of the Confederate forces up Malvern Hill and along the Union defensive positions that include cannons and numerous signs that tell the tale of this battle.  Occasionally, during the summer months, park rangers can be found here giving guided tours and describing the battle as it unfolded in 1862.

Due to both his debilitating cautious nature and ferocious Confederate assaults, Union General George McClellan abandoned his grand scheme to capture the Confederate capital at Richmond, he ordered a long retreat down the peninsula formed by the James and York Rivers.  During the nights, the Union forces would take defensive positions in case of Confederate attacks and that’s what they did on Malvern Hill the night of June 30, 1862.  The next day, General Robert E. Lee decided to attack the Union forces before they reached Harrison’s Landing. As Lee prepared his attack, McClellan and some of his staff left the army on the hill as they sought protection from the Union fleet. His decision to leave his army and watch the battle unfold from Union ships would come back to haunt him as he ran for president in 1864.

In a series of disjointed frontal assaults, Lee’s forces charged up Malvern Hill on three successive occasions and were beaten back each time by the withering fire of the Union artillery.  Planning and communication errors prevented the Confederate forces from making a concerted attack and the result was a tactical Union victory.  McClellan’s army continued its retreat the next day and Lee was lauded as the savior of Richmond. Although Lee did complete driving McClellan out of Virginia, this battle was really Union Tactical victory since Lee was forced to leave the field of battle. Lee's attacks brought about 5,560 Confederate casualties, about 1/10 of his force. His actions of assaulting fortified hills bristling with cannon bring criticisms from scholars who saw this was an unforeseen foreshadow to Lee's ordering of a grand assault against the heavily fortified Union center line July 3, 1863.