This monument featuring Hank Aaron was dedicated in 1982 at the former Atlanta-Fulton County Stadium and is currently located in front of Turner Field. For many months following the announcement that the team would be moving from Turner Field to a new park in the suburbs, the status of this monument was in limbo. After a contentious debate that pitted Black leaders and residents of the city against the team and those who hoped to move the statue to the new stadium in the suburbs, and after evidence came forward showing that the statue belonged to Fulton County, the Braves canceled their plans to move the statue and declared that they would erect a statue to Aaron at their new park. 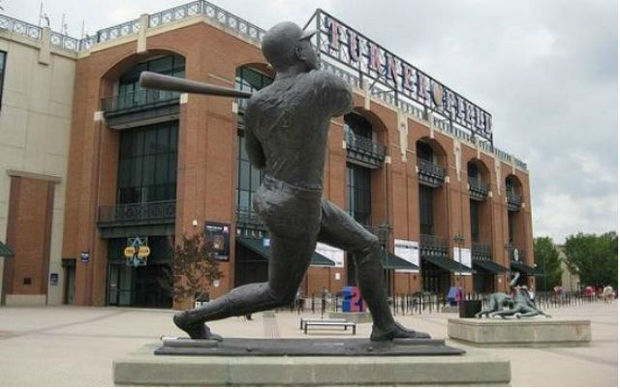 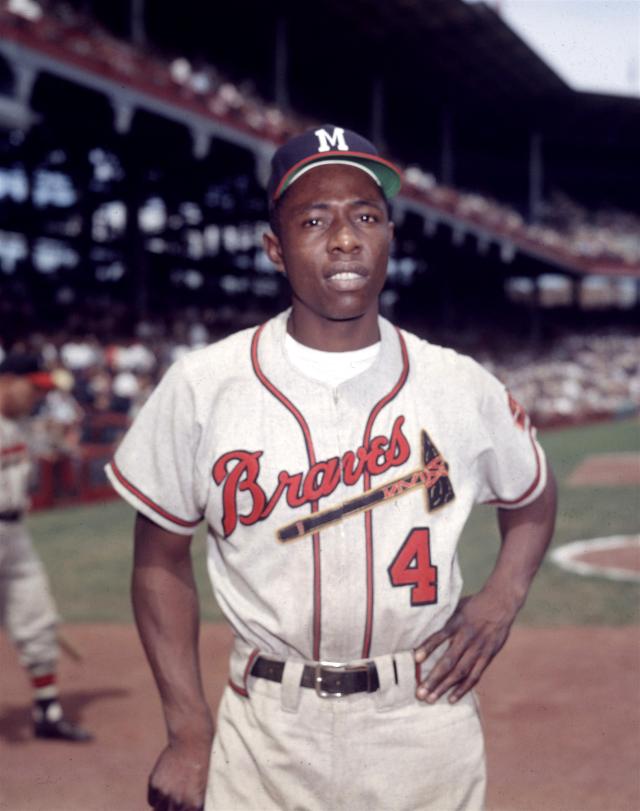 The Braves hoped to move the monument to their new stadium in the suburbs, while many in the Black community, hoped it would stay at its present location-both as a monument to an important Black player and leader and as a tribute to the Braves years in the city.

Keisha Lance Bottoms, the Executive Director of the Atlanta Fulton County Recreation Authority, produced documentation showing that her office had jurisdiction over the statue in February 2016. From her perspective and many others, the Braves should not be permitted to move this statue of an African American player who was also active in promoting civil rights from the city to the Cobb County suburbs when the move to SunTrust Park in 2017. The Braves insisted that the decision to move the statue belongs to the current owners of the team in consultation with Hank Aaron.

After Fulton County officials provided documentation of their jurisdiction and their intent to keep the statue at its present location, the Braves announced that they would respect this decision and create a new statue to Aaron at Cobb Field. In many ways, the fight over the statue's location is an extension of the fight over the recent decision to move the team from the city to the suburbs.

Henry Lewis Aaron, known to fans as Hank Aaron or "Hammerin' Hank," was born in Mobile, Alabama, on February 5, 1934. Aaron endured a segregated world in Mobile and began his career in 1951 with the Indianapolis Clowns of the Negro Leagues. In 1952, Aaron helped to lead the Clowns to the Negro World Series. Major League scouts and managers noticed Aaron's talent. Following the success of Jackie Robinson and other players, the Milwaukee Braves paid the Clowns $10,000 to purchase Aaron's contract in 1952. After two years in the Braves minor-league farm system, Aaron made his Major League debut at the age of 20.

Aaron made an immediate impact for the Milwaukee Braves, hitting a homeroom in the 11th inning that propelled the Braves to the World Series. However, despite his success on the field, many white fans in Milwaukee did not fully embrace the slugger. The problem of racism became especially problematic for Aaron in 1965, when the Braves moved to Atlanta. Some Braves fans even cheered against their own player in hopes that an African American would not be the first Atlanta player to reach major milestones such as 3,000 career hits.

Despite hate mail, death threats, and a plot to kidnap one of his daughters should he continue to play and break the most important record in baseball, Aaron broke Babe Ruth's career homerun record on April 8th, 1974 when he hit his 715th homerun. At the end of his career, Aaron had hit 755 home runs. Hank Aaron received three Gold Glove awards, a league MVP award, the National League Batting Title, and was inducted into the Baseball Hall of Fame. For his advocacy of civil rights while a player and beyond, the NAACP awarded Aaron the Spingarn Medal, Medal of Freedom.