When the Civil War tore apart the country, protecting the capital became the Union’s priority. Shortly after the beginning of the conflict, Alexandria was captured by Union troops, who promptly garrisoned the city. The huge influx of soldiers prompted the need for both hospitals and cemeteries, so the Alexandria National Cemetery was established in 1862, one of fourteen cemeteries established that year. Several thousand Civil War combatants rest in this cemetery, as well as civilians. Several structures were added to the cemetery in the late nineteenth century. The cemetery was added to the National Register of Historic Places in 1995. 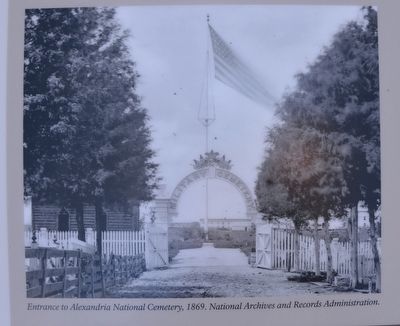 Initially known as Soldiers' Cemetery, the Alexandria National Cemetery is one of the first national cemeteries in the US, established in 1862. It stretches across 5.5. acres and by 1864 was almost filled to capacity, which led to the construction of the Arlington National Cemetery.

The original grave markers were wooden; however, in 1876, all were replaced by marble headstones. Most of the soldiers buried here were enlisted men, as it was customary for dead officers to be embalmed and shipped home. Although originally about 40 Confederate soldiers were buried in the Alexandria National Cemetery, the Daughters of the Confederacy had their bodies reinterred at Christ Church in 1879. The Alexandria National Cemetery is the final resting place of over 4,500 soldiers. It is a constant reminder of the brutality of war and of the impact it had on Alexandria.

However, not only military men rest in this cemetery. Four civilians who died while chasing John Wilkes Booth after President Abraham Lincoln’s assassination are also buried here. These men drowned trying to cross the Potomac River on April 24, 1865. Their deaths are honored by a simple monument built in 1922. This boulder monument with a bronze plaque was erected near their graves.

The cemetery's superintendent's lodge is the largest surviving structure in the cemetery. U.S. Quartermaster General Montgomery C. Meigs designed the lodge in the Second French Empire style. Built around 1870 of Seneca sandstone, it is emblematic of architecture in Washington, D. C. in that time period. In 1887 the cemetery built a "comfort station," later converted into a kitchen and shed in 1927 when the cemetery built a summer dining room of brick.

In 1995, the Alexandria National Cemetery, along with 72 other national cemeteries constructed during the Civil War, was listed on the National Register of Historic Places.

The cemetery was documented as part of the Historic American Buildings Survey, and this documentation is held by the Library of Congress.