The Film Center Building is a 13-floor building, located on Manhattan’s 9th Avenue between 44th and 45th Streets, in the Hell’s Kitchen (Clinton) section of the borough. The 177-foot-high building was constructed in 1927-1928, when New York was still one of the capitals of the motion picture world, and Hollywood did not yet have a monopoly on film production. The building is still used by film companies today, even though the center of filmmaking has long since moved elsewhere. The building was designed in the then-popular Art Deco style by the architectural firm of Buchman and Kahn, led by the distinguished New York architect Ely Jacques Kahn. The interior of the building is notable for its bold and varied colors, extending to details such as the lobby directory and even the radiator grills, and its treatment of the lobby walls as if they were tapestry. The interior of the Film Center Building was entered in the National Register of Historic Places in 1984.

Entrance to the Film Center Building 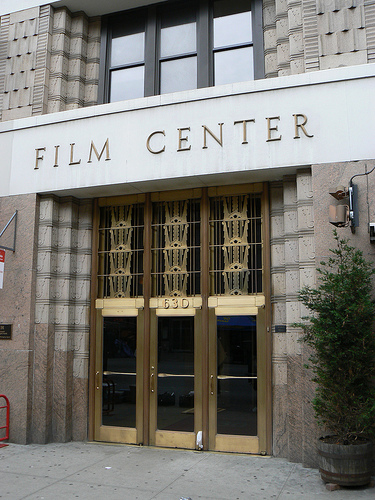 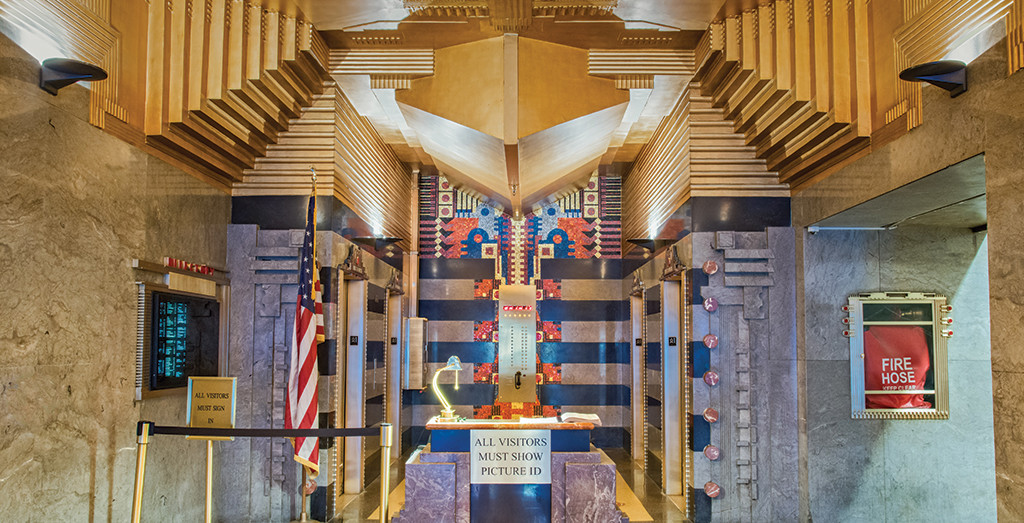 Detail of the building lobby 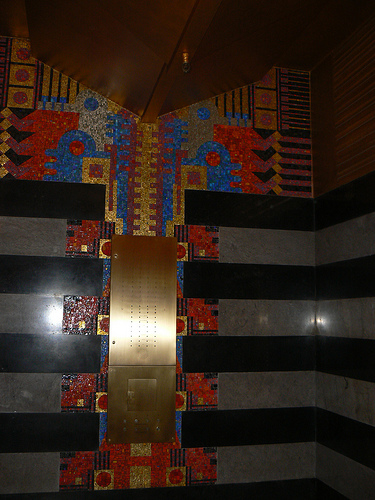 Elevator in the lobby 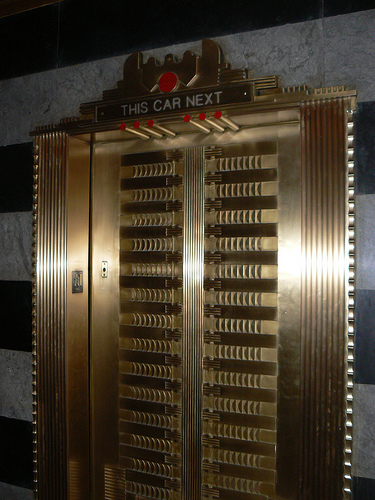 The directory board in the lobby 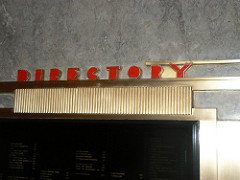 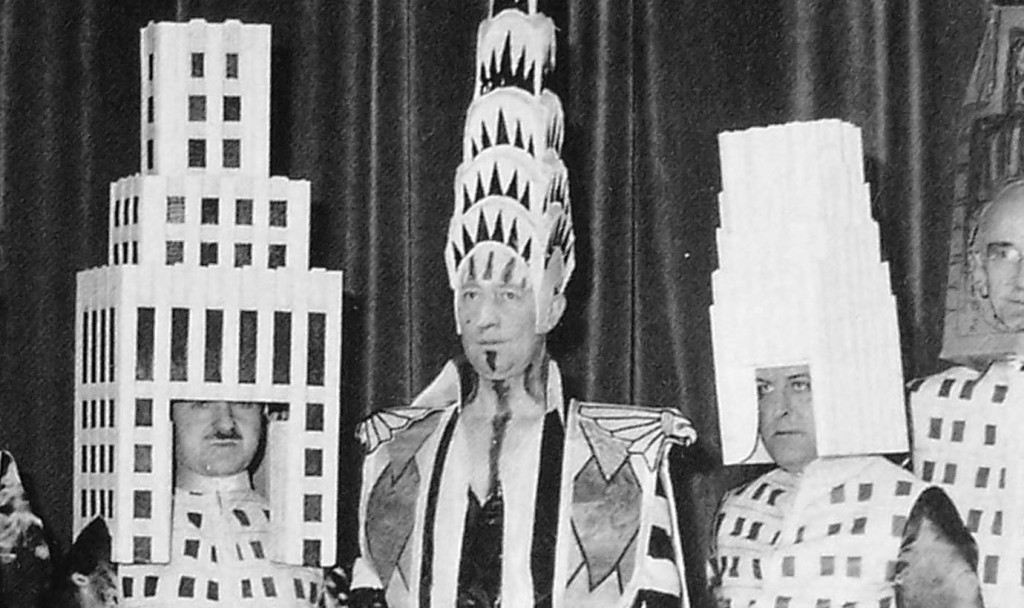 The site of the building was originally farmland in the 19th Century. The 9th Avenue portion was sold to The Film Center in 1928. Development of the theater district in the west side of Manhattan early in the 20th Century led to the movie industry moving into the area: New York was, in the 1910s and 1920s, a prominent center of the industry. Within 10 years of its construction, the Film Center building would house 70 film distributing companies, and it still is used by many film companies to the present day.

Ely Jacques Kahn was born in New York to a prominent Jewish family of French and Austrian extraction. He attended Columbia University and then the Ecole des Beaux-Arts in Paris. The highlight of his career was the 1920s and 1930s, when Kahn became noted for his bold use of color. He praised “a new style of architecture — a New York style,” in contrast to what he called the “cluttered detail of the past.” Other buildings that he designed during this period included the 2 Park Avenue building and the Squibb Building on Fifth Avenue. (Once, at a costume party, he arrived in a costume designed to look like the Squibb building!)

According to the Landmarks Preservation Committee report of 1982, the lobby areas comprise “one of New York's finest surviving Art Deco style interiors.” The report continues: “The walls in the elevator bay area are banded with broad, horizontal stripes of alternating light and dark stone. The modernistic design is carried through to the elevator doors, and the adjacent directory board and mail box. These are all particularly striking details of the interior space, defined by horizontal and vertical bands.” The mosaic at the back of the lobby, situated at right angles to the elevators, is, according to the report, “striking both for its use of color, mostly blue, orange, yellow, and red, and for its play against the other geometric patterns found throughout the interior. While the mosaic is made up of horizontals and verticals, it does not have the strictly uniform and precise angles found throughout the rest of the interior; it is a more relaxed and seemingly spontaneous composition.”

In 1937, the novelist Ayn Rand was writing her first famous novel, The Fountainhead. She wanted to know more about the profession of architecture, since the hero of her novel, Howard Roark, was an architect. She approached Kahn to ask if she could work for him as an unpaid assistant for purposes of research and he agreed. He even introduced Rand to her hero, the famous architect Frank Lloyd Wright, who many say was the model for Howard Roark. Her opinion of Kahn himself, however, seems to have been less admiring. She privately compared him to the character of The Fountainhead's heroine’s father, Guy Francon, a conservative architect spending his mature years hobnobbing with society instead of working. As one writer has pointed out, this characterization was doubly unfair: Kahn was both a bold architect and a hands-on designer – as the intricate detail of the lobby of the Film Center Building proves. It was his interest in the decorative arts, and in color, that makes his Art Deco interiors so distinctive.

When Rand approached Kahn to suggest that she preface the book with a personal tribute to him, he wisely suggested that she revise the passage to make it a tribute to the architectural profession in general, so that today, very few people associate Kahn with Guy Francon.