Established in 1837, the Boston Public Garden is the first public botanical garden in America. It lies adjacent to the Boston Common (separated by Charles Street) on land which was once Round Marsh, a tidal marshland along the bay of the Charles River in Colonial times. Today, the park features a number of statues and fountains, Swan Boat rides in the lagoon, seasonal floral displays, tropical displays, rose beds and topiary, greenhouses with over 80 species of plants, and over 100 varieties of trees, including a Dawn redwood from ancient seeds discovered in China. Hour-long public tours are offered twice daily, May - September, on Tuesdays and Thursdays at 10 am and 4 pm. 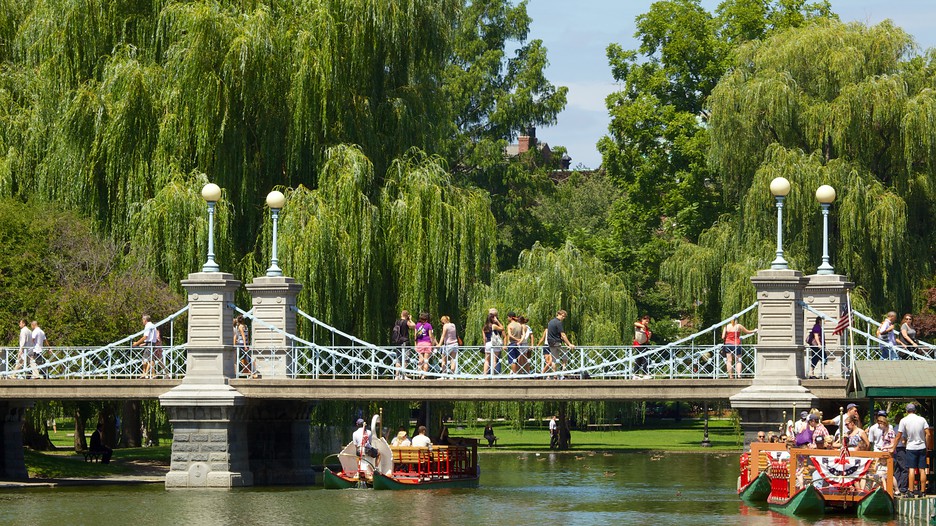 Panorama of the Boston Public Garden (image from Wikimedia) 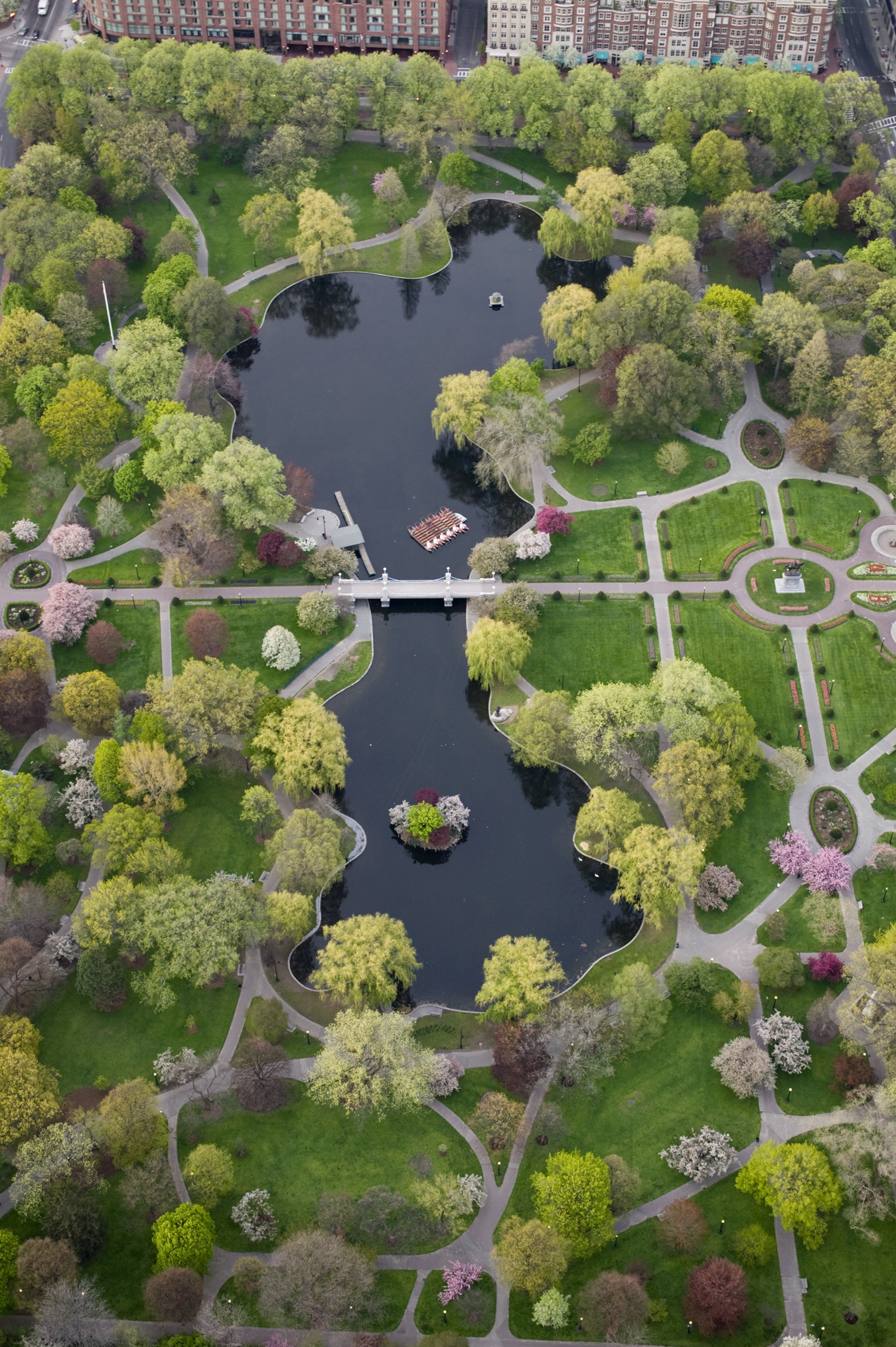 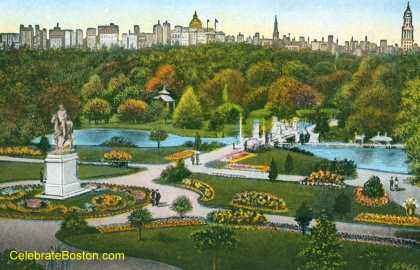 19th century arbor in the garden (image from Wikimedia) 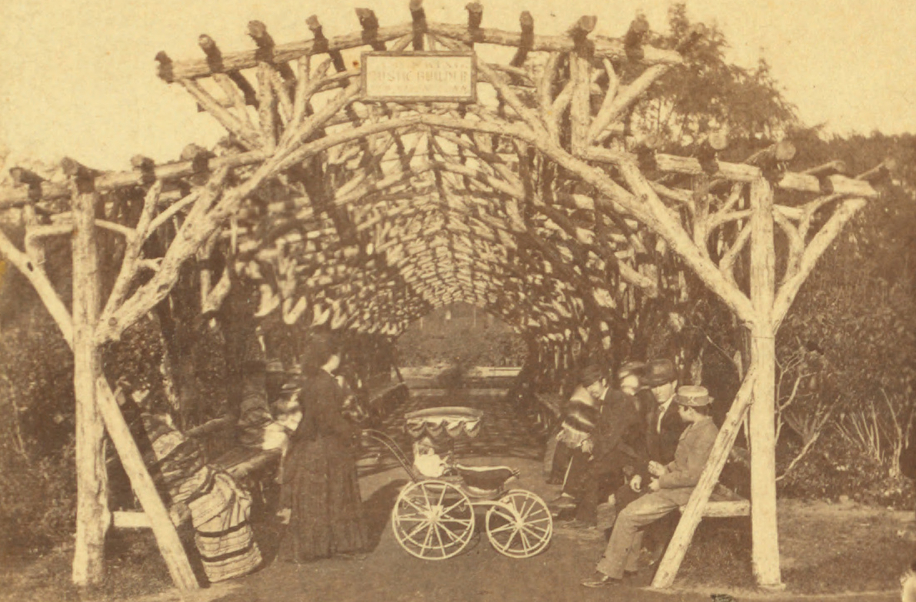 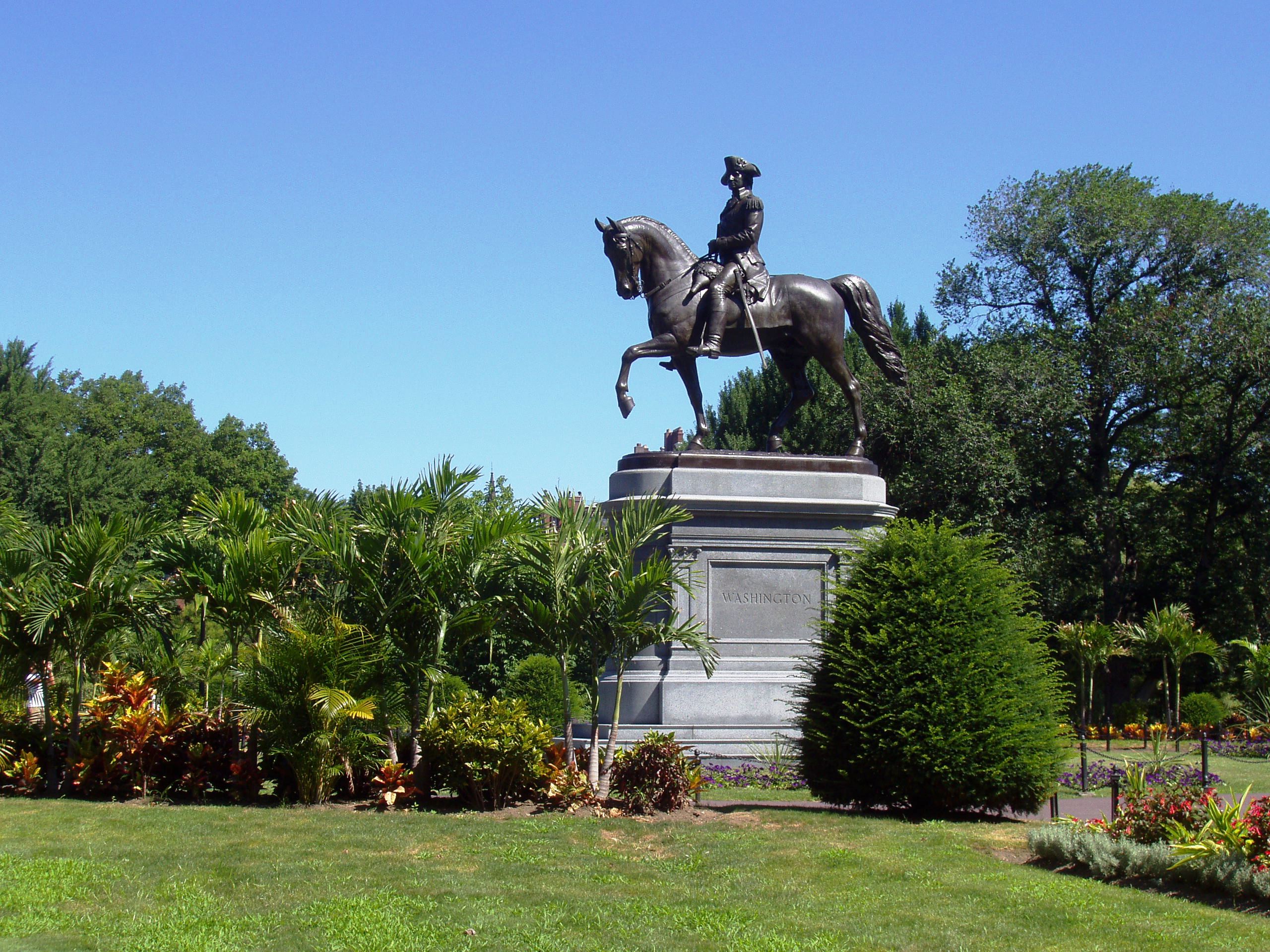 The Ether Monument (image from Wikimedia) 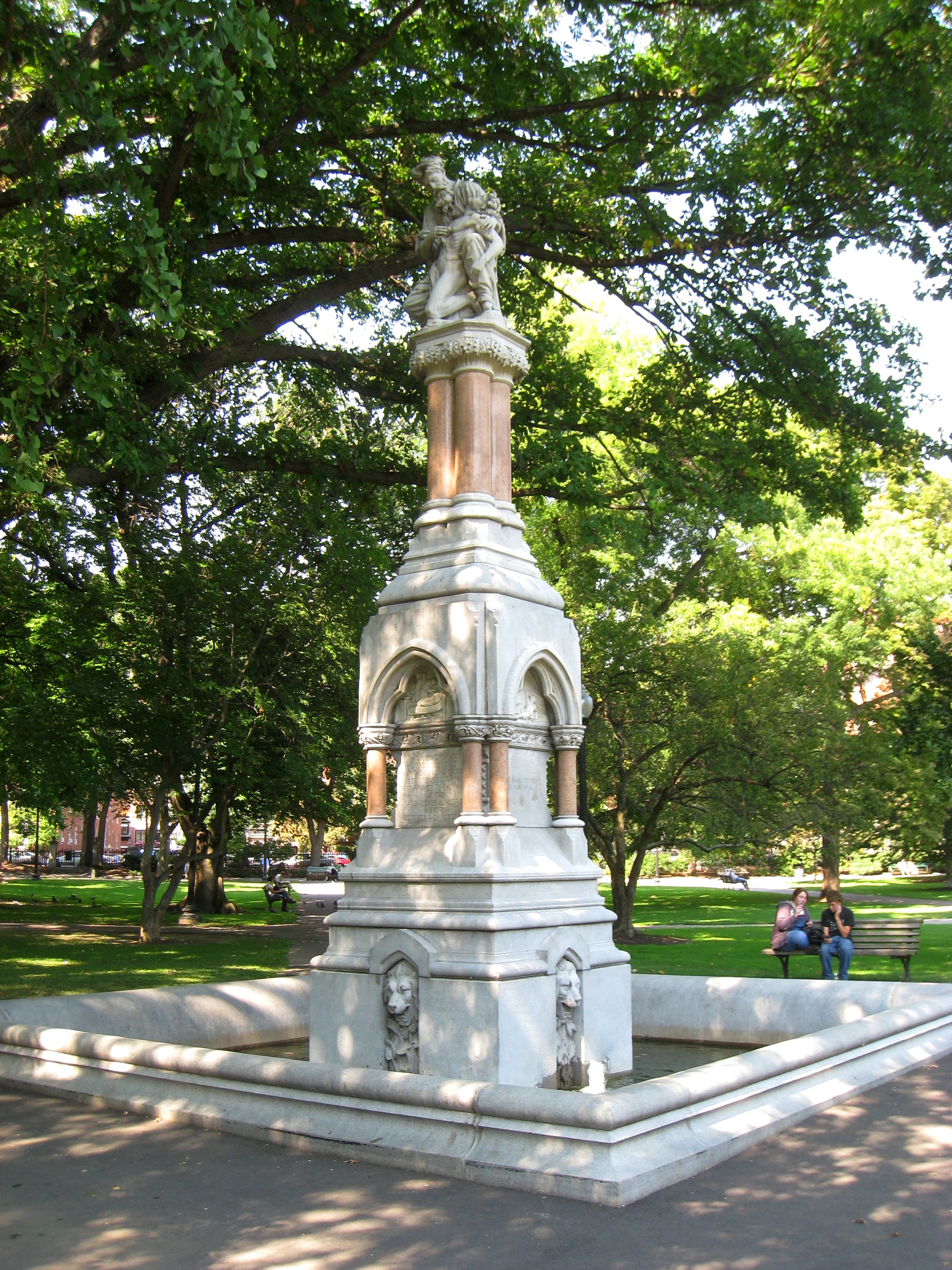 Detail of the Ether Monument (image from Historic Marker Database) 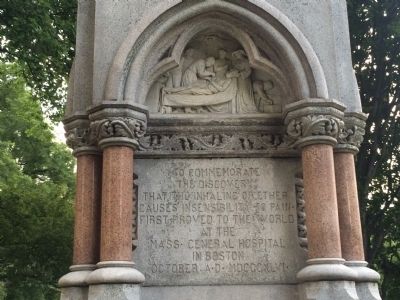 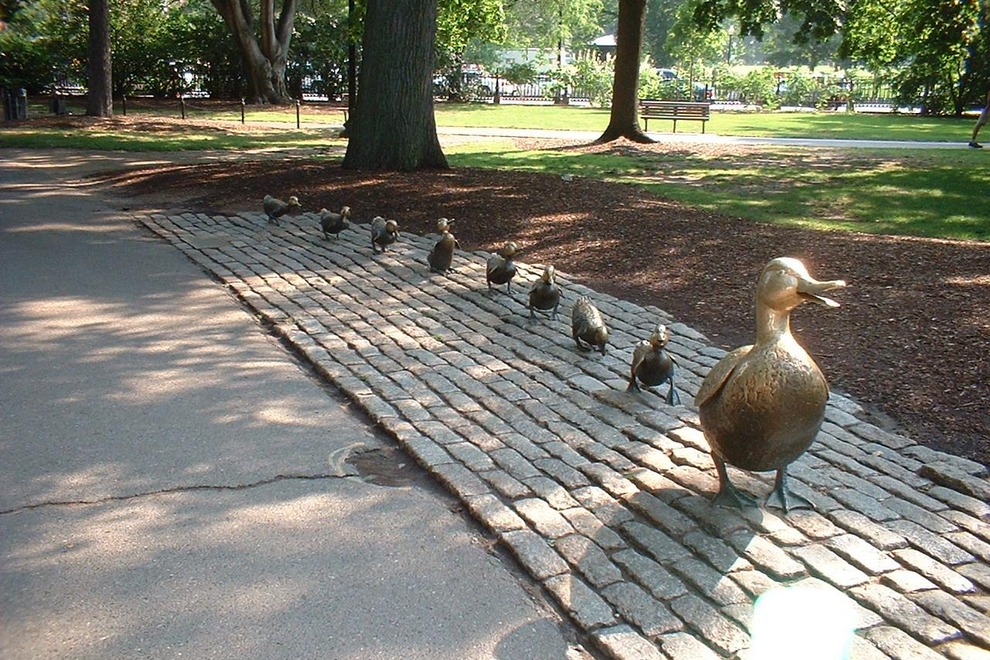 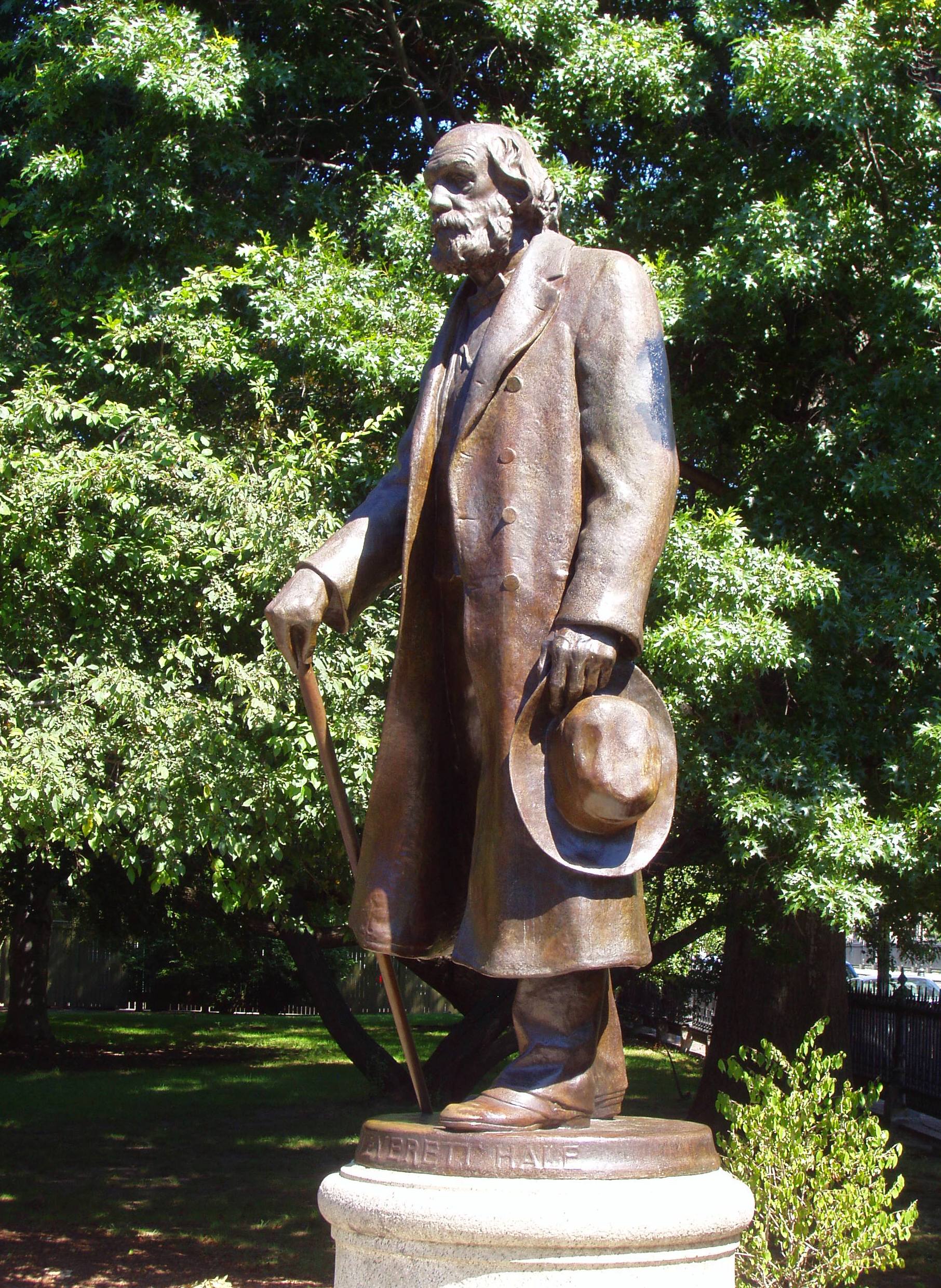 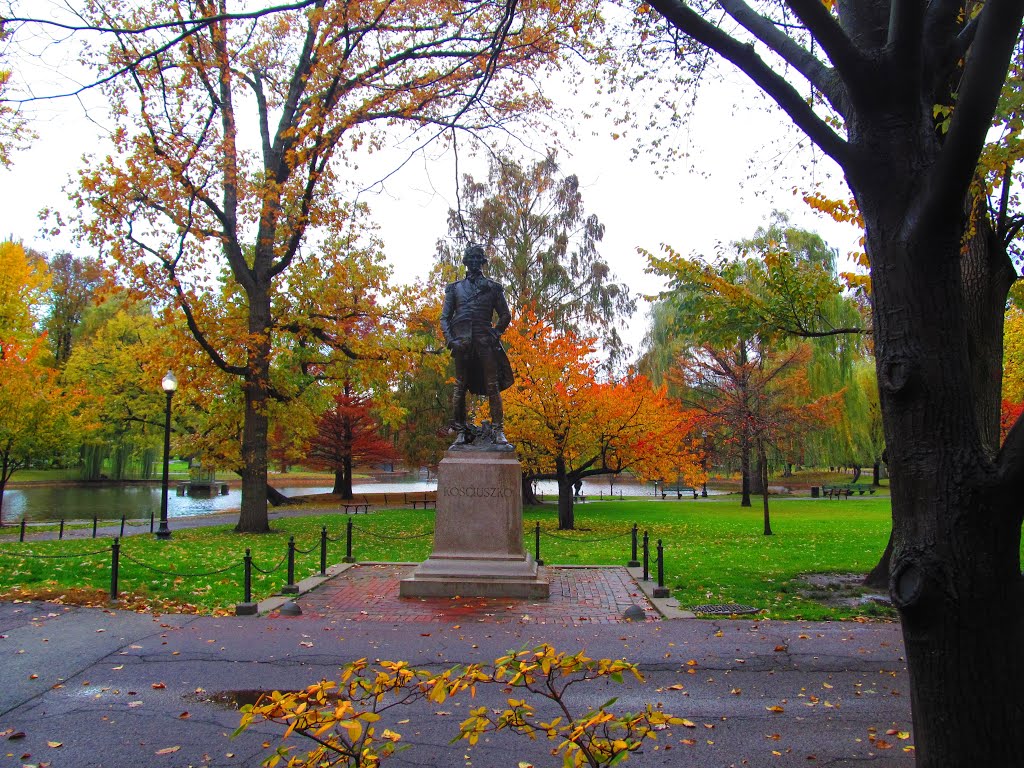 Established in 1837, the Boston Public Garden is the first public botanical garden in America. It lies adjacent to the Boston Common (separated by Charles Street) on land which was once Round Marsh, a tidal marshland along the bay of the Charles River in Colonial times. The shore was the site of clam digging, snipe shooting, swimming, fishing, and (in winter) skating. After the Mill Dam was built in 1821 to provide water power for Boston factories and mills, the marsh became a malodorous mud flat. In spite of filling efforts, the land continued to exude an unpleasant smell, and the land remained vacant until, in 1837, a private association of 17 Boston citizens proposed to establish a botanical garden on the grounds. The City Council approved, and the following year the land was officially designated as the Public Garden; in 1852, the city took over the care of the garden, and seven years later, after citizen objections prevented the city from selling off the land, the park was devoted to public use in perpetuity.

True to Victorian park style, the Boston Public Garden was designed with vibrant colors, patterned arrangements, meandering pathways, a serpentine lagoon, and exotic plants. George Meacham's design, selected by public competition, featured new techniques of collection, hybridization, and plant propagation to produce greenhouse-grown, imported plants and vibrant, exotic annuals. At first, some Bostonians even complained that the intensely colorful plants were in poor taste. During the 1860s, the gardens gained an iron perimeter fence, four fountains, a bridge designed by William G. Preston crossing the lagoon, and two statues: one of George Washington on horseback by sculptor Thomas Ball, and the other a marble and granite fountain memorializing the first use of ether as an anesthetic in 1846 at Massachusetts General Hospital. The Ether Memorial was designed by Henry Van Brunt, with figures and bas reliefs by John Quincy Adams Ward. In the 1870s, the first of four bronze statues on granite pedestals was placed, honoring Charles Sumner, a Boston statesman and abolitionist. Later, the Sumner statue was joined by a monument to fellow anti-slavery Boston statesman Wendell Phillips (placed 1915) designed by Daniel Chester French, Richard E. Brooks' statue of Union colonel Thomas Cass (placed 1899), and Theo Alice Ruggles Kitson's statue of Polish general Tadeusz Kosciuszko (placed 1927), who served George Washington as an aide during the American Revolution. In 1877, shipbuilder Robert Paget, inspired by Wagner's opera Lohengrin, designed and launched the foot-propelled paddle Swan Boats which have become the centerpiece of the Boston Garden's lagoon. Although Paget died the following year at the age of forty-two, his widow, Julia Paget, took up management of the Swan Boat enterprise over the objections of male business owners, and the fourth generation of Pagets continues to operate the boats today. The original Swan Boats could carry eight passengers; the current six boats can carry up to twenty and date from 1918-1956. Among the famous passengers who have taken Swan Boat rides are Shirley Temple, Judy Collins, Calvin Coolidge, and John F. Kennedy.

Though many of the Garden's oldest trees were removed to accommodate an incline entrance to the Boston subway in 1897 and a forty-foot wide strip of the Garden was destroyed yet again when the entrance was removed to Boylston Street in 1914, the park endured. In 1904, a Japanese antique dealer donated an iron Japanese lantern to the Garden, a statue was erected to author and historian Edward Everett Hale in 1913, and a fountain monument to Boston philanthropist George Robert White was erected in 1924. After World War II, Boston's parks, including the Garden, gradually became neglected. By the 1960s, the fountains no longer worked, the bridge was unsafe, the fencing was in disrepair, the trees suffered from disease, and its maintenance staff and equipment reduced. The civic non-profit Friends of the Public Garden was formed in 1970 to address such issues in both the Garden and the adjoining Boston Common. First, however, the group had to fight an urban renewal plan proposing to, literally, overshadow the garden with six million square feet of skyscrapers. The attention garnered by their winning battle against the Park Plaza proposal led to successful restoration of the fencing, vegetation, fountains and sculptures, and infrastructure of the Garden. In 1987, Nancy Schön's bronze figures of the Duckling Sculpture, based on Robert McCloskey's 1941 children's book, Make Way for Ducklings, were placed in the park at the corner of Beacon and Charles Streets. A grimmer addition to the statuary of the Garden is the 9/11 Memorial Garden of Remembrance designed by Victor Walker in 2004.

Today, the park continues to feature Swan Boat rides in the lagoon, seasonal floral displays, tropical displays, rose beds and topiary, greenhouses with over 80 species of plants, and over 100 varieties of trees, including a Dawn redwood from ancient seeds discovered in China. Hour-long public tours are offered twice daily, May - September, on Tuesdays and Thursdays at 10 am and 4 pm.

To commemorate the discovery that the inhaling of ether causes insensibility to pain. First proved to the world at the Mass. General Hospital in Boston October. A.D MDCCCXLVI / This also cometh forth from the Lord of hosts which is wonderful in counsel and excellent in working / Isaiah / In gratitude for the relief of human suffering by the inhaling of ether a citizen of Boston has erected this monument A.D. MDCCCLXVII. / The gift of Thomas Lee /  Neither shall there be any more pain Rev. / Erected 1867.