Completed in 1975, the I-64 Bridge is a polygonal Warren through truss design that spans Kanawha River between Oakwood Road (Exit 58A) and Virginia St. (Exit 58B) in Charleston, West Virginia.

I-64 Bridge at U.S. Route 119 (Corridor G) Fort Hill interchange (Exit 58A) under construction in 1973. Image taken by Ray Lewis of the West Virginia Department of Transportation. https://commons.wikimedia.org/wiki/File:3downtown.jpg 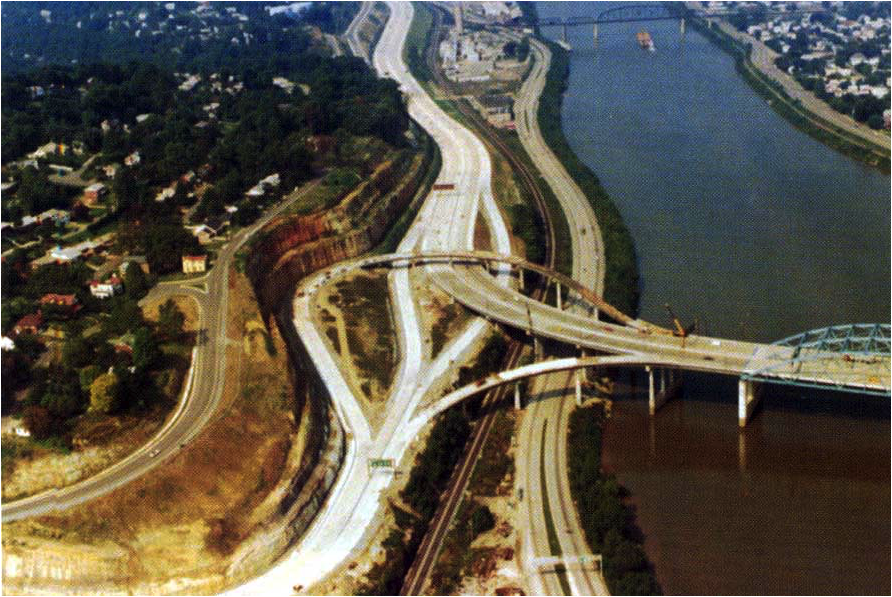 View of I-64 Bridge looking west from Kanawha Boulevard river trail in Charleston, WV. 2013 photo by Michael A. Miller 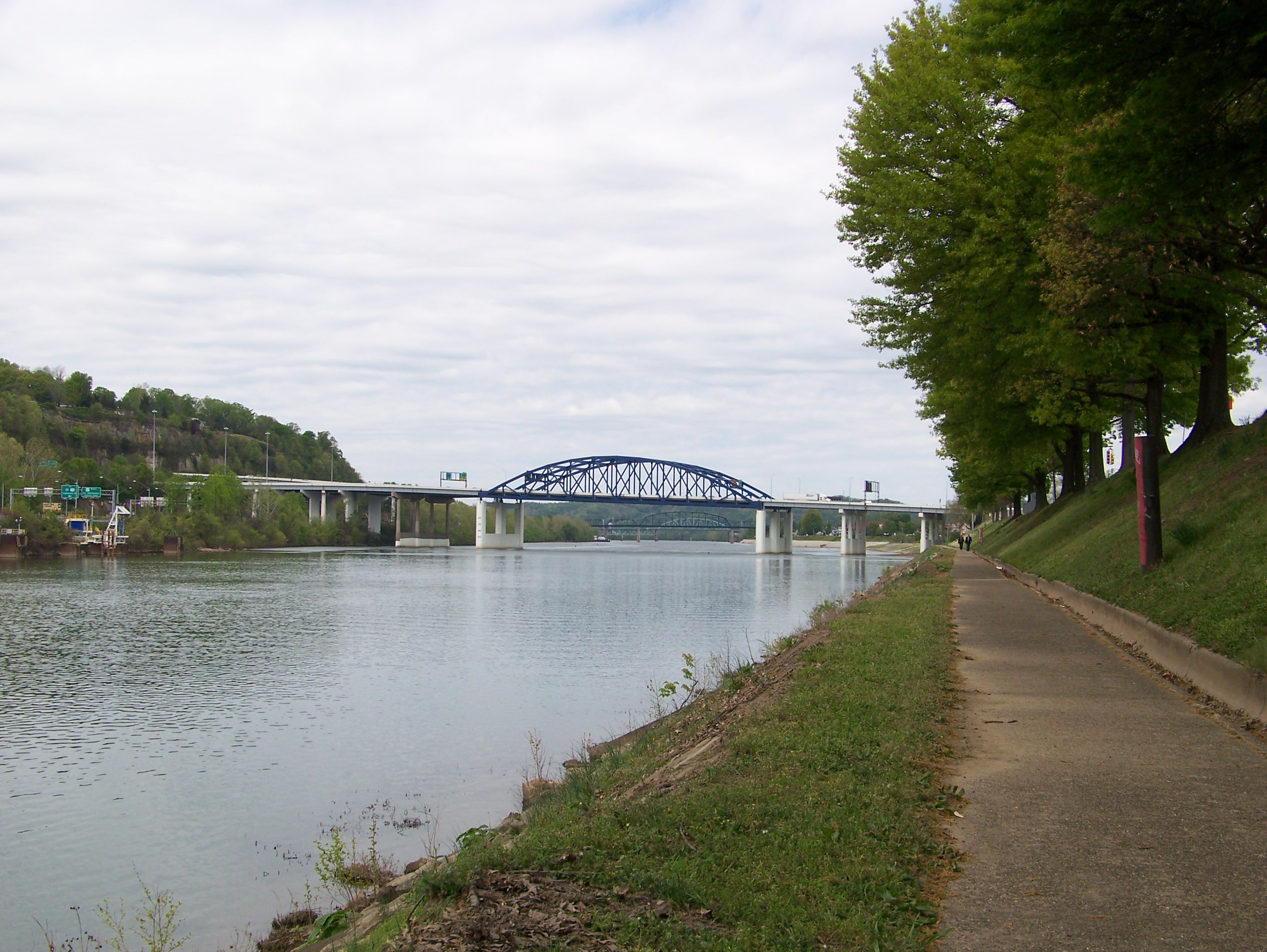 On June 25, 1956 President Dwight Eisenhower signed into law the National Interstate and Defense Highways Act (Public Law 84-627), which authorized $25 billion for the construction of 41,000 miles of Interstate highways in the U.S. The act represents the largest public works project in U.S. history at the time.

Charleston's mayor at the time, John Shanklin, opposed any Interstate highway going through the center of the city. Shanklin eventually reversed his position, stating that it would become a "great thing." Proposed alignments for Interstate 64 near Charleston included a northern arc around the greater metro area, a downtown route, and a southern route around South Charleston. I-64 reached Dunbar (about six miles west of Charleston) by 1967, where it stalled for six years as the debate raged over the preferred route through the capitol city. Finally, in late 1971 a route was chosen to bring I-64 through South Charleston to Fort Hill and cross Kanawha River on a bridge to be built near downtown. Building of I-64 through Charleston began in September 1971, and construction was completed to the I-77 interchange in 1975.

The project involved building a six-lane bridge spanning Kanawha River at the mouth of Elk River between Virginia Street (Exit 58B) on the north bank and Oakwood Road (Exit 58A) on the south. Foster and Creighton Construction Co. from Tennessee erected the I-64 bridge for the West Virginia Division of Highways. It is a polygonal Warren through truss design, with a superstructure consisting of six continuous deck girder spans, a simple through truss main span, four continuous deck girder spans and six continuous concrete box beam spans with an overall length of 2,246 feet. The structure has a clear roadway width of 52 feet 6 inches in each direction and is supported by reinforced concrete stub abutments and concrete piers. The deck is made of cast-in-place reinforced concrete and has been overlaid with a latex-modified concrete surface. As of 2013, daily traffic on the I-64 Bridge totaled about 107,000 vehicles, making it the heaviest-traveled span in the State of West Virginia.

In 2005 the bridge, alternately known as Fort Hill Bridge or I-64 Bridge, was renamed the Eugene A. Carter Memorial Bridge. According to WV Senate Concurrent Resolution No. 17 introduced during the 2005 legislative session by Sen. Brooks McCabe and Sen. Dan Foster:

"Eugene A. Carter was born in 1909 in Prudence, Fayette County. At the age of 17, he went to work for the New River Pocahontas Consolidated Coal Company, the same coal company that employed his father. In 1934, during the Depression, Eugene A. Carter came to Charleston and began working as a driver for a local dairy company. He helped to form the first local Teamsters Union. In 1936, he was elected President of Teamsters Local 175 and served in that capacity until 1974. In 1945, Eugene A. Carter was elected President of the West Virginia Federation of Labor and served in that capacity until the AFL State Federation and the CIO Industrial Union Council merged to form the West Virginia Labor Federation, AFL-CIO, in 1957. The leadership and inspiration of Eugene A. Carter helped the AFL and the Teamsters to experience dramatic growth during his tenure. He truly dedicated his life for the betterment of West Virginia workers and serves as an inspiration to labor leaders who have followed him."