The Charleston House Holiday Inn opened in 1966 on Kanawha Boulevard East overlooking the Kanawha River. It is open as a Four Points Sheraton as of May 2016. 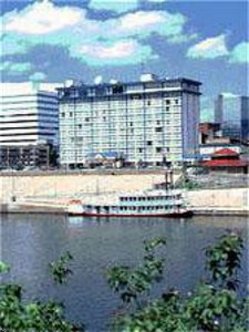 The Charleston House Holiday Inn was located on Kanawha Boulevard between Laidley and Summers Streets. The site is one of the oldest developed areas in the city, directly across from the boat landing (levee) that propelled the young city’s growth.

By the 1960s, the area had become rundown as growth spread to other city sectors. An almost three-block area that encompassed this site was demolished in the city’s first phase of Urban Renewal. A single structure, Charleston National Bank, the Charleston House, and Shanklin Parking Garage would dominate each of the three blocks.

The Charleston House opened in 1966. The city’s better hotels dated from prior decades, so business gravitated to the Charleston House. It featured large banquet rooms and a 12th story restaurant overlooking the river and the city. The Charleston House, prior to the Marriott opening in 1983, was the hotel of choice during the state legislative session, basketball tournaments, and local conferences and concerts.

The hotel was always associated with the Sternwheel Regatta and events held at Haddad Riverfront Park. Many visitors enjoyed renting rooms on the riverside and watching the shows unfold from their balconies.

Over time, the property began to decline without major renovations. In October of 2010, the Holiday Inn sign came down and the property reopened as a Ramada in September of 2011. A three-year multi-million dollar update followed, and the property opened as a Four Points by Sheraton in January of 2014. Soon after, it was announced that the two top floors, the 11th and 12th, would be subdivided into eight luxury condominiums.

In November, 2015, Marriott announced it would be buying the property.