The Blossom Dairy is located in downtown Charleston, West Virginia. It is a classic Art Deco-designed restaurant originally opened in 1941. 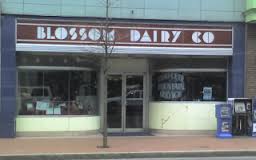 Sam Sloman opened the Blossom Dairy, named for his mother, in Charleston, West Virginia, as a full-service dairy on June 1, 1927. A resident of Cleveland, Ohio, Sloman saw opportunity in the growing Kanawha Valley and began his business with four employees and two trucks at 225 Virginia Street across from what is now the Municipal Auditorium.

Success was such that four years later he opened a new, modernized dairy on the city’s West Side. The building contained an attached store featuring the dairy’s own products, as well as counter service and tables for lunch. It was an immediate success with people living and working in the neighborhood. The franchise proved so popular that Sloman opened five more diners by 1939.

The seventh diner, at 904 Quarrier Street, would prove to be the last. In a September 9, 1977, Charleston Daily-Mail article, Russell Smith described how he helped design the final Blossom diner with Sloman’s input. At the time, Smith was a salesman working for a “Chicago-based firm” that sold a product called Vitrolite out of Parkersburg. Vitrolite was a trade name for a structural, pigmented glass popular during the first half of the 20th century. Its shiny surface could be curved, an essential feature of the diner’s Art Deco style.

Sloman must have been impressed. He bought $29,000 worth of the product. Smith then sketched out the design and layout of the business.

On June 20, 1941, Mayor D. Boone Dawson cut the blue ribbon, opening the “showcase” Sloman had wanted. The guests would see a room bursting with vivid color and high contrast. Geometric forms in glass and chrome gave the space a cosmopolitan quality. Airy figures in motion etched into mirrors added size and depth to the room.

The interior was only 25 feet across, with mirrors on one side reflecting the red, blue, and ivory Vitrolite panels on the opposite wall.  Alternating straightedge and rounded high-back blue booths lined the left side.  Red Vitrolite tabletops in the center matched the red 70-foot counter to the right. The soda fountain and cooking area was behind the counter, in a sunken galley area, placing the cooks and waitresses at eye level with counter patrons.

Sam Sloman died in 1953. The family sold the business to Broughton Farm Dairy in 1961. The restaurant has opened under different management over the years. Its most recent period of greatest success came under the late Bill Sohovich, who ran it as the Blossom Deli from 1994 to 2010. The building is a contributing structure to the Downtown Charleston Historic District.