The Union Building was constructed from 1909 to 1911 along Kanawha Boulevard in downtown Charleston, West Virginia. Upon completion, the structure was the tallest building in the state. The structure is also known as the Alderson-Stephenson Building, named after the two men who financed the project, Charles Alderson and Samuel Stephenson. The building originally house the Union Trust Company, but was later converted into office space. The construction of the Kanawha Boulevard demolished most of the buildings alongside the structure and separated the Union Building from the business district in Charleston; the building was spared due to high demolition costs. 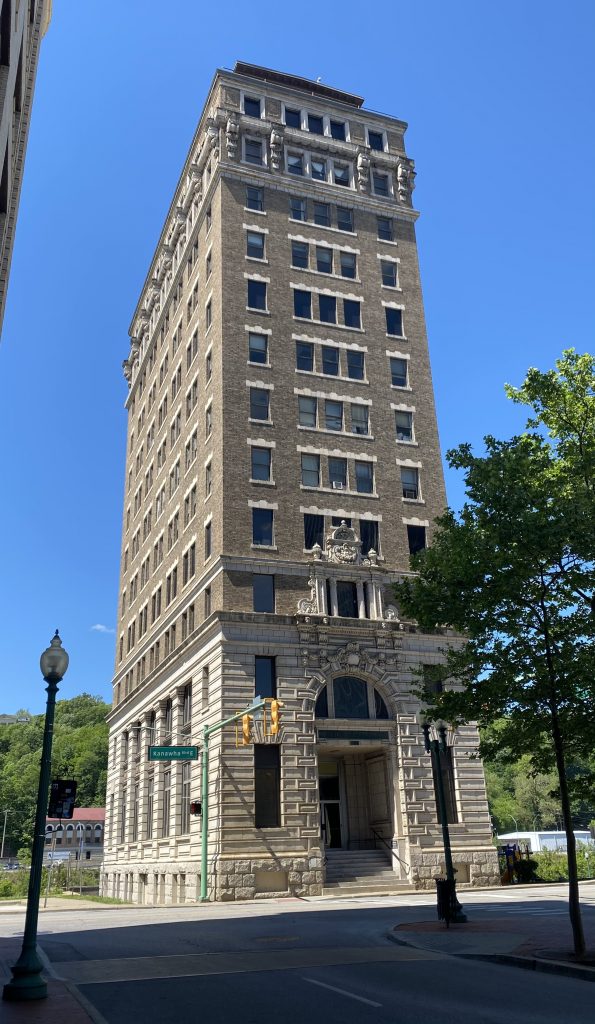 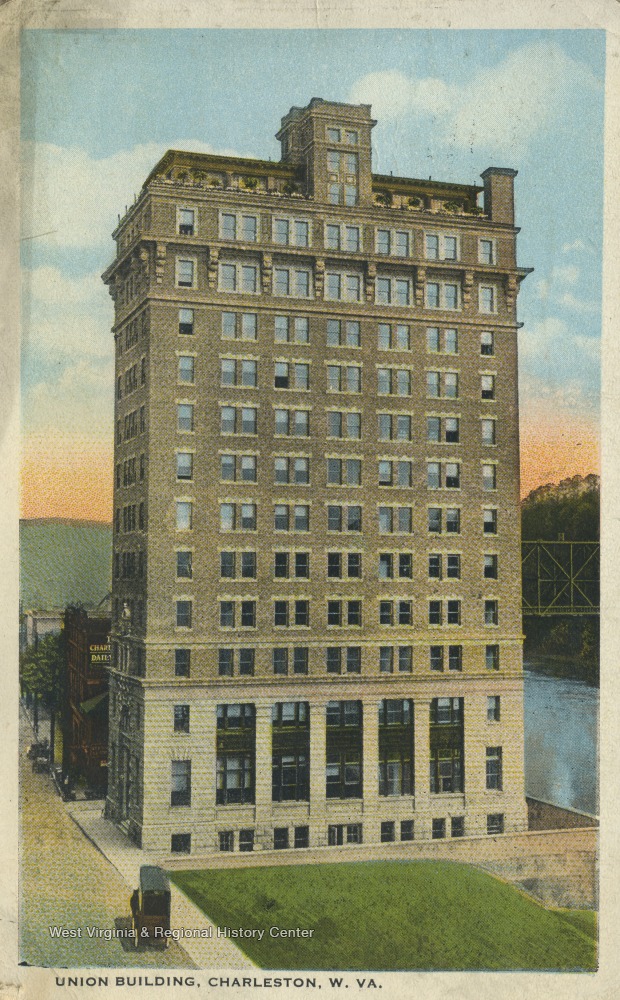 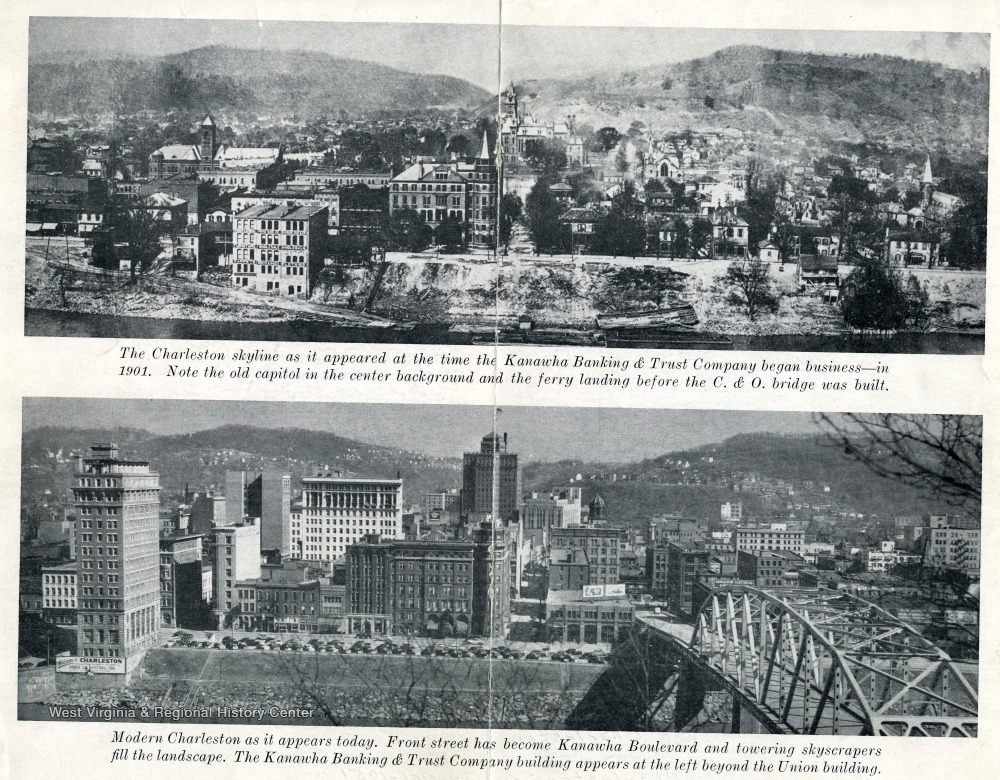 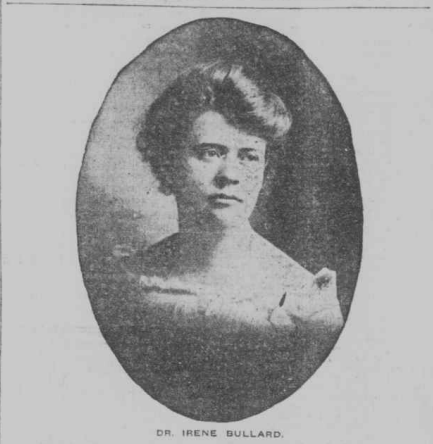 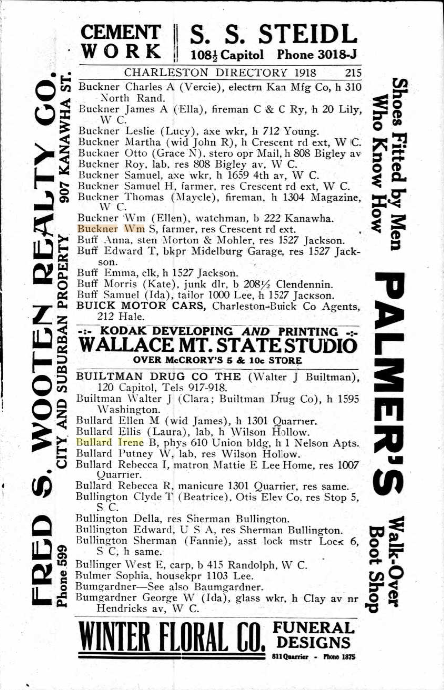 The Union Building, designed by architects Harding and Upman, is a thirteen-story Neoclassical Revival style building. It was originally named the Alderson-Stephenson Building in honor of businessmen Charles Alderson and Samuel Stephenson who financed its construction. The Union Trust Company was the main tenant in the building, which was later converted into a general office tower.

The building required 32 concrete piers that extended down 64 feet through 18 feet of quicksand to support the steel frame. The first two stories of the brick building have a rusticated stone facing. The building has one-over-one, double-hung sash replacement windows with stone lintels, keystones, and sills. A cornice is embellished with decorative brackets and dentil molding. A recessed entrance facing Kanawha Boulevard features decorative acanthus leaves and egg-and-dart molding. The building was finished on all four sides since it was such a visible building.

Companies that inhabited the building after completion were the Scherr-Morton Company, Fisher, May & Company, Stock Brokers, Civil and Mining Engineers, Consulting Accountants and Auditors. The Scherr-Morton Company held offices on the second floor of the Alderson-Stephenson Building, and were one of the top insurance companies in Charleston at the time. Scherr-Morton handled fire, life and causalty insurance, surety bonds, loans, and real estate, and insured most of the successful and developing businesses in Downtown Charleston. Stock brokers, Fisher, May & Company, were members of the New York Stock Exchange, and opened an office on the first floor of the Alderson-Stephenson Building to provide Charleston with a firm to save community members from traveling to New York to invest. Civil and mining engineers, Clark and Krebs, housed their office in the building as well, and were the top mining engineers in Charleston for a number of years. These geologists were credited with some of the most remarkable feats of engineering in the southern parts of West Virginia. When consulting accountants and auditors, Jayne and MacCutcheon, opened their office in the Alderson-Stephenson Building they were newcomers to Charleston, but proved their worth in the community in just a few short years.

“Five years ago there were few persons in this part of the country who had an idea that progressive citizens of Charleston would ever erect such a massive structure as is that at the Kanawha river end of Capitol Street, but there were those in the East who had been looking toward Charleston with a knowledge that it would someday become a city that would well afford such a building.”1

At the time of its completion, the Union Building was the tallest in the state and a symbol of the city’s early banking and business prosperity. Between 1938 and 1940, Kanawha Boulevard was constructed along the Kanawha River, separating the Union Building from the remainder of the business district. All other buildings on the south side of Kanawha Street were demolished for the boulevard project. Only the Union Building survived, because the City of Charleston ran out of funds for demolition. Today, Charleston's skyline would be dramatically different without the iconic Union Building.

Dr. Irene Bullard was born June 26, 1876 in Snowville, VA. She attended and graduated from Wadsworth High School in Radford, VA. She attended a school in Madison, Wisconsin and took professional courses at Farmville before teaching public school for three years. Afterwards, she pursued a medical degree, first at Boston Medical School and then at the University of Michigan where she graduated with her M.D. in 1903.

Bullard first practiced medicine in Birmingham, Alabama with Dr. Laura Burton. Bullard and Burton were two of the first female doctors in the state and they practiced together for approximately two years. After Dr. Burton was murdered by her ex-husband, Bullard left Alabama.

In December 1906, Bullard was appointed as third assistant physician at Eastern State Hospital for the Insane at Williamsburg, VA. By 1911, she had moved to Charleston, WV and opened a practice there. In West Virginia Bullard worked with the State Charities and Correction Association and was the secretary for the Anti-Tuberculosis Society. In 1920 she was appointed as the Board Examiner of nurses alongside Dr. Harriet Jones and held that position until 1922.

Bullard was active in the West Virginia suffrage movement. She served as chief of the literary bureau, secretary, and treasurer for the West Virginia Equal Suffrage Association and hosted suffrage meetings in her office located in the Union Building. When the 19th Amendment was ratified in 1920, Bullard was the secretary and treasurer of the Kanawha County Woman Suffrage Association. After ratification, Dr. Irene Bullard was active in the Democratic Party. She ran as a delegate for the 1920 Democratic Convention and served on the Democratic Women’s Executive Committee.