The Buffalo Creek Disaster Memorial, located in Kistler, WV, stands as a reminder of one of the darkest hours in West Virginia history. The Buffalo Creek Flood Disaster occurred on the cold rainy Saturday morning of February 26, 1972, when a coal slurry dam failed. This failure, predicted by inspector results, caused a domino effect by causing the failure of two other dams. The release of 132 million gallons of coal slurry devastated sixteen small communities that are collectively known as Buffalo Creek. The failure of the dam claimed the lives of 125, injured 1,100, and displaced an additional 4,000. The resulting loss of property exceeded fifty million dollars and the cleanup cost residents and taxpayers an additional fifty million dollars. Despite clear evidence of negligence, the Piston Coal Company paid only $1 million in damages.

The official state historical marker was placed by the West Virginia Division of Archives and History as part of the WV Celebration in 2005. Photo by Devon M. Goodman 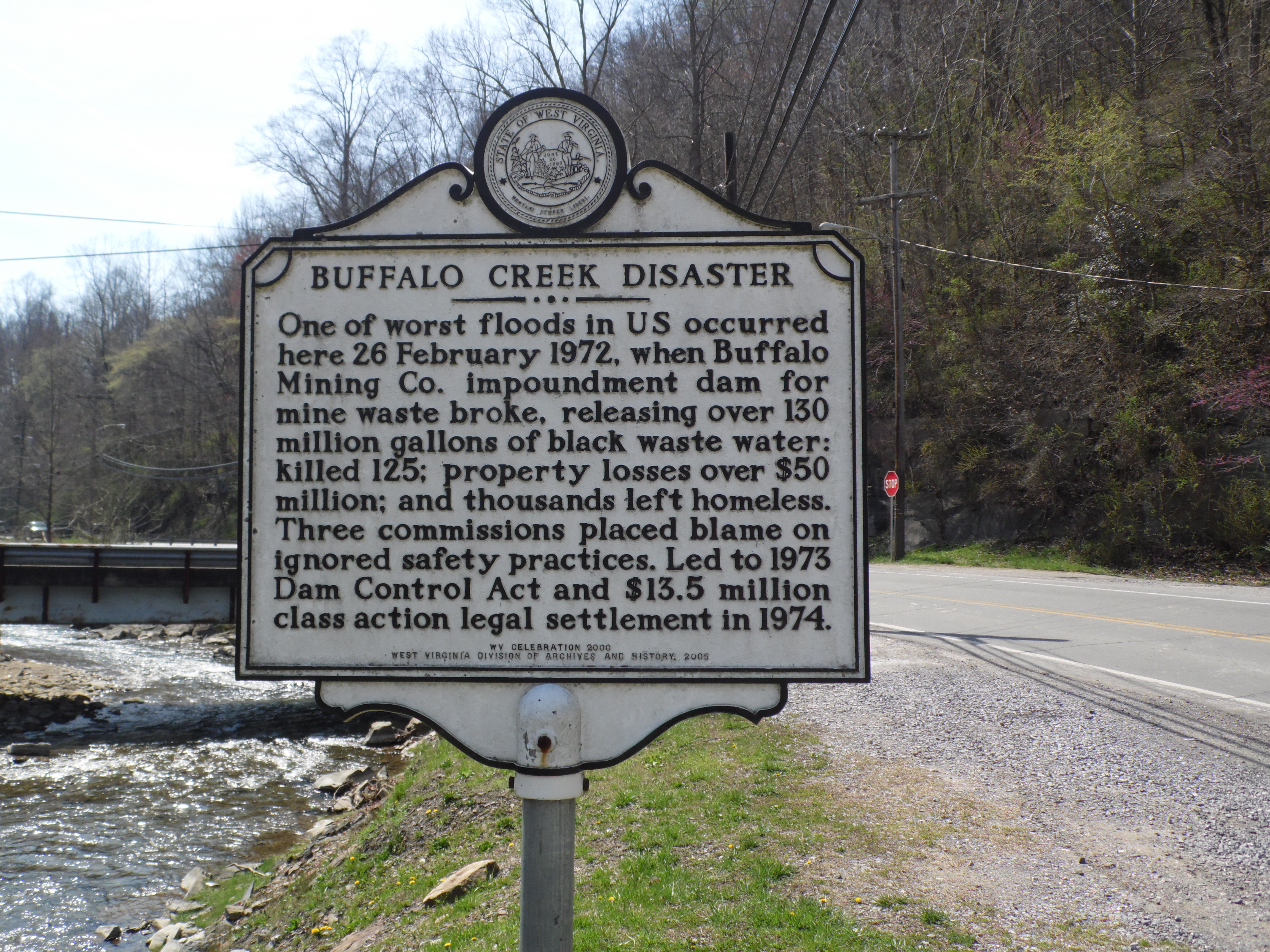 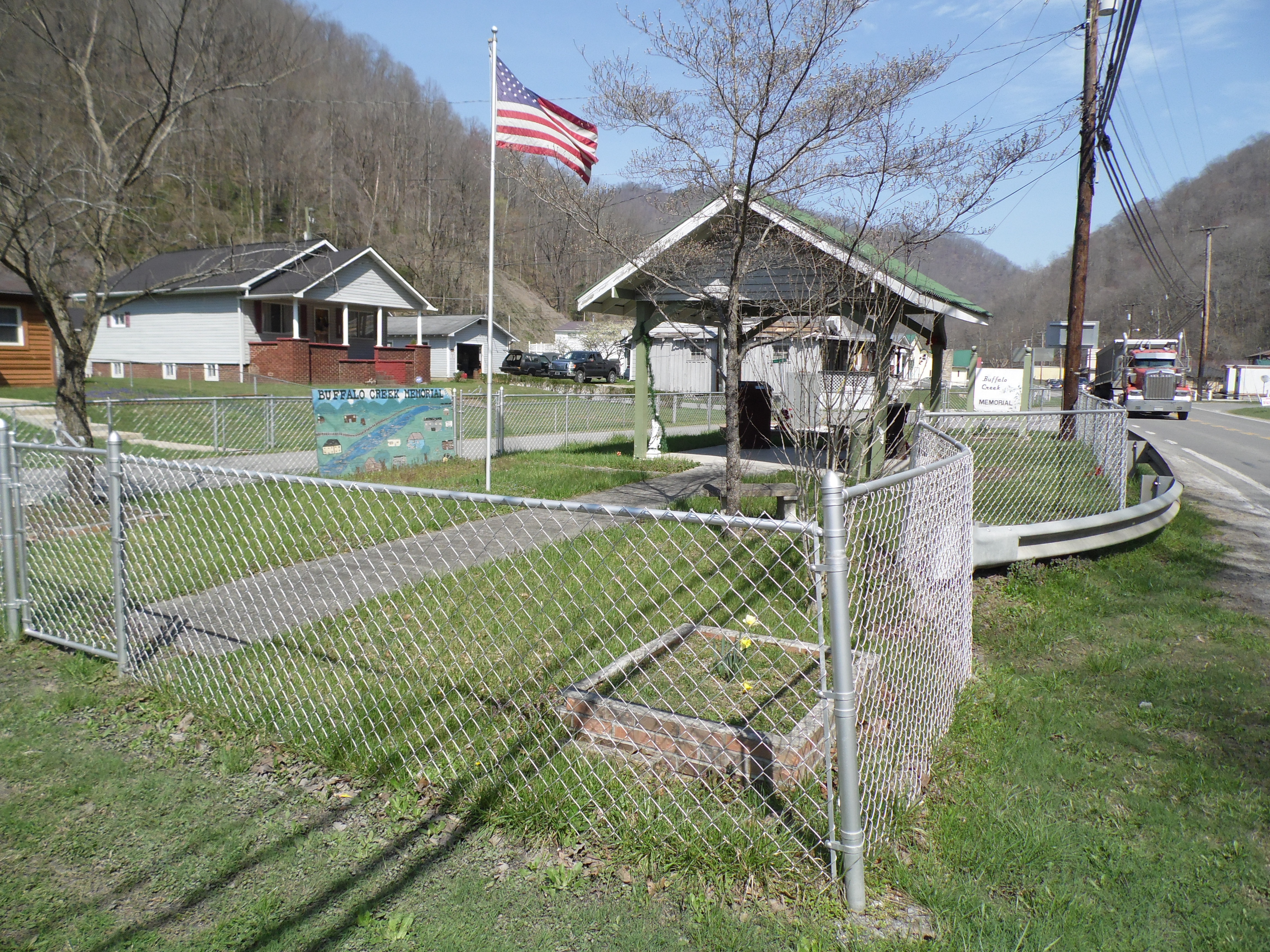 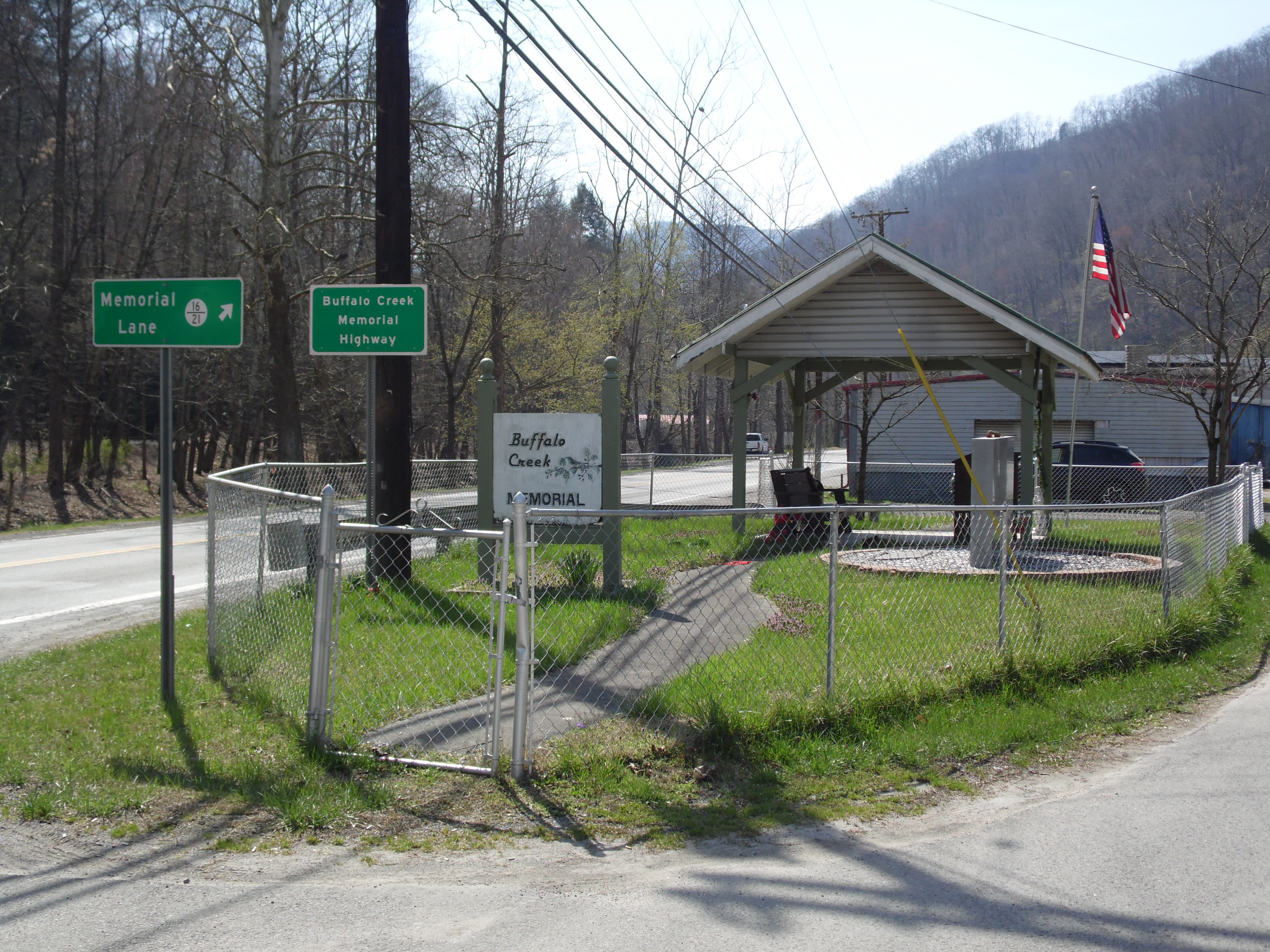 The granite memorial that lists the names of the 125 lives lost due to the Buffalo Creek Flood. Photo by Devon M. Goodman 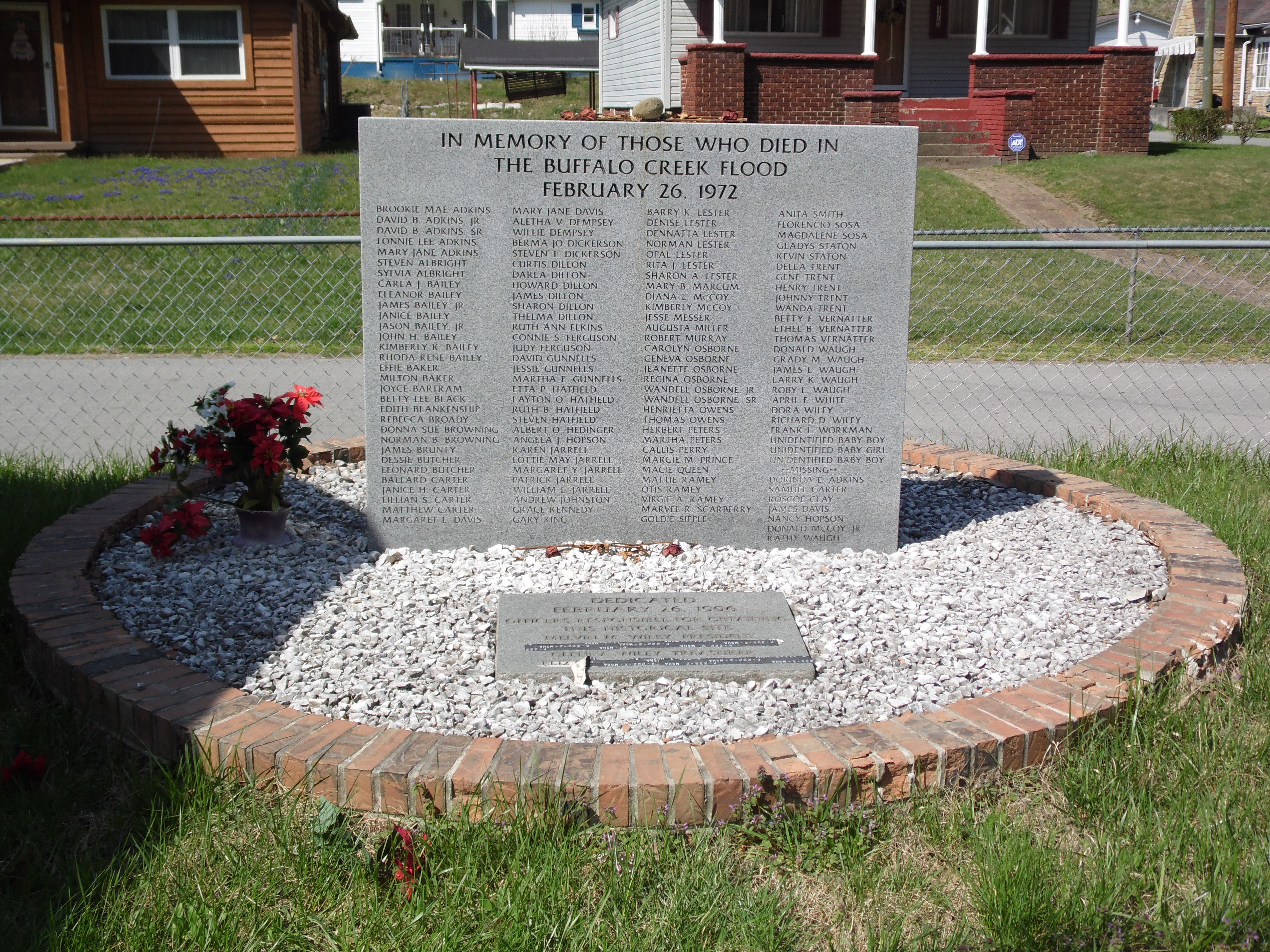 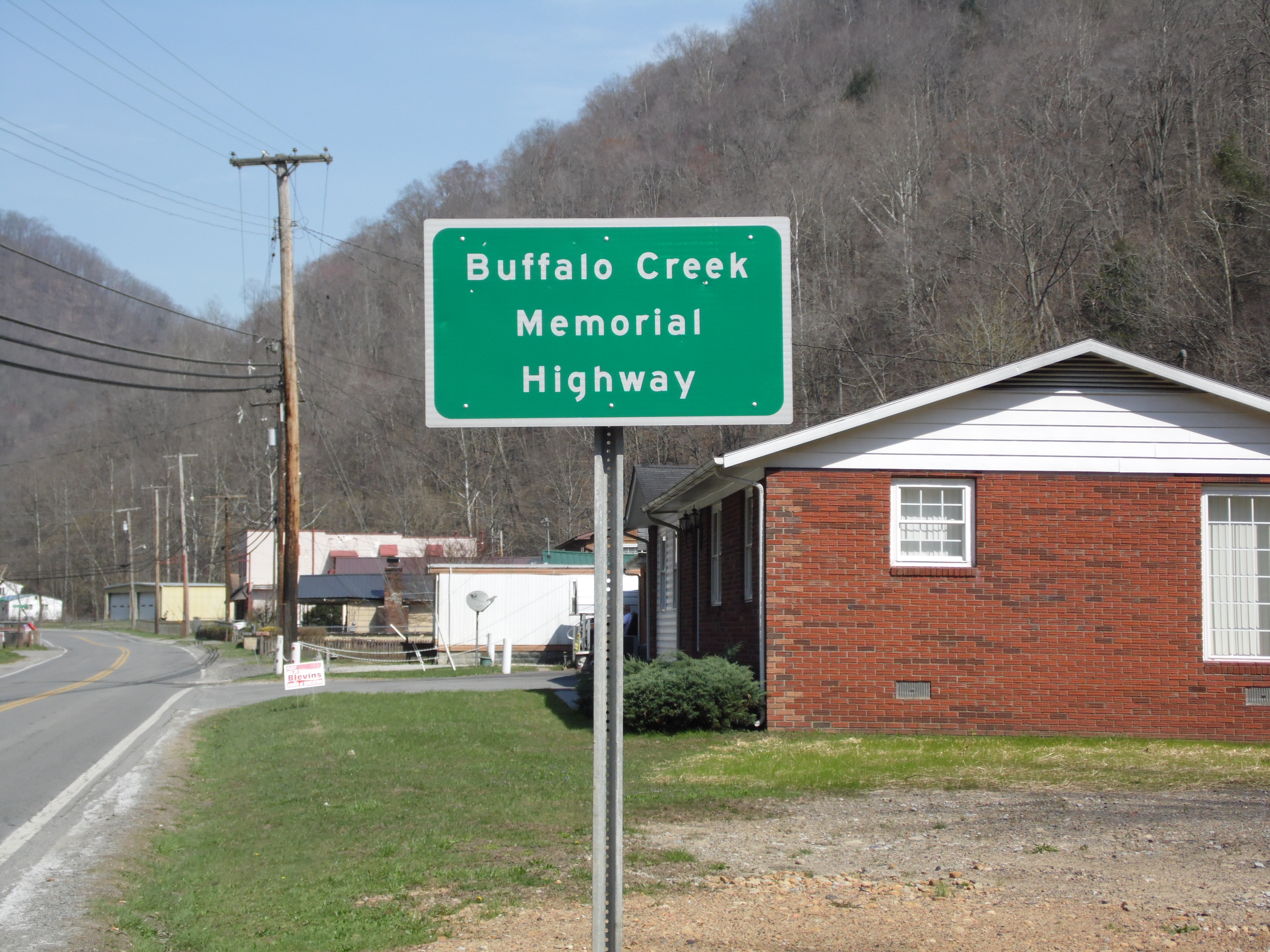 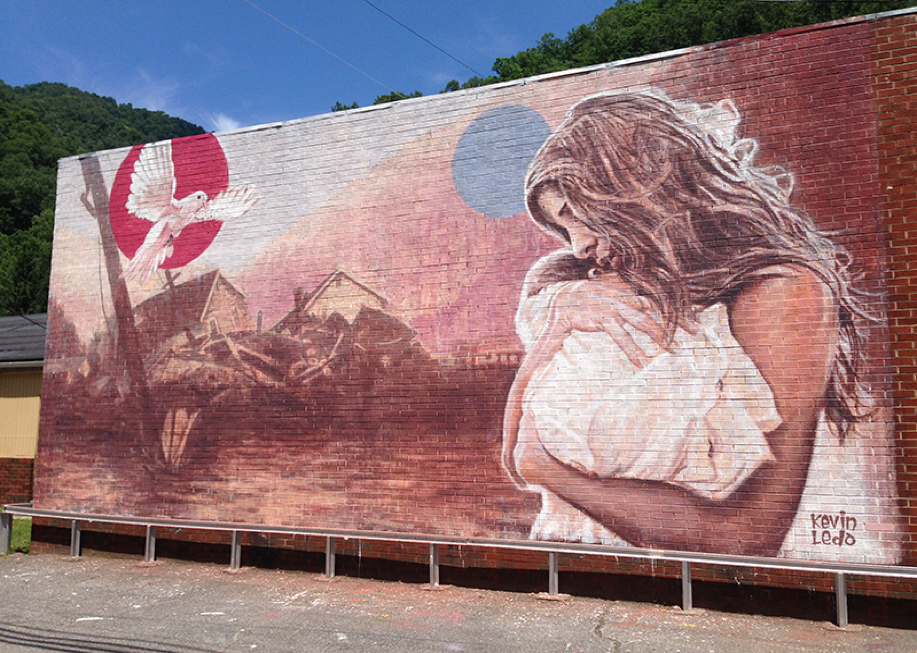 The aftermath of the Buffalo Creek Disaster. Photo by MSHA 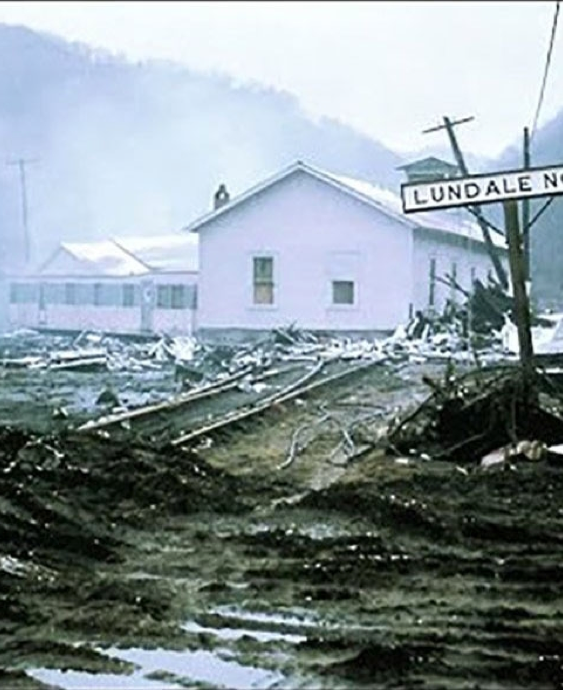 The site of the three dams that collasped causing the Buffalo Creek Disaster in 1972. Photo by Devon M. Goodman 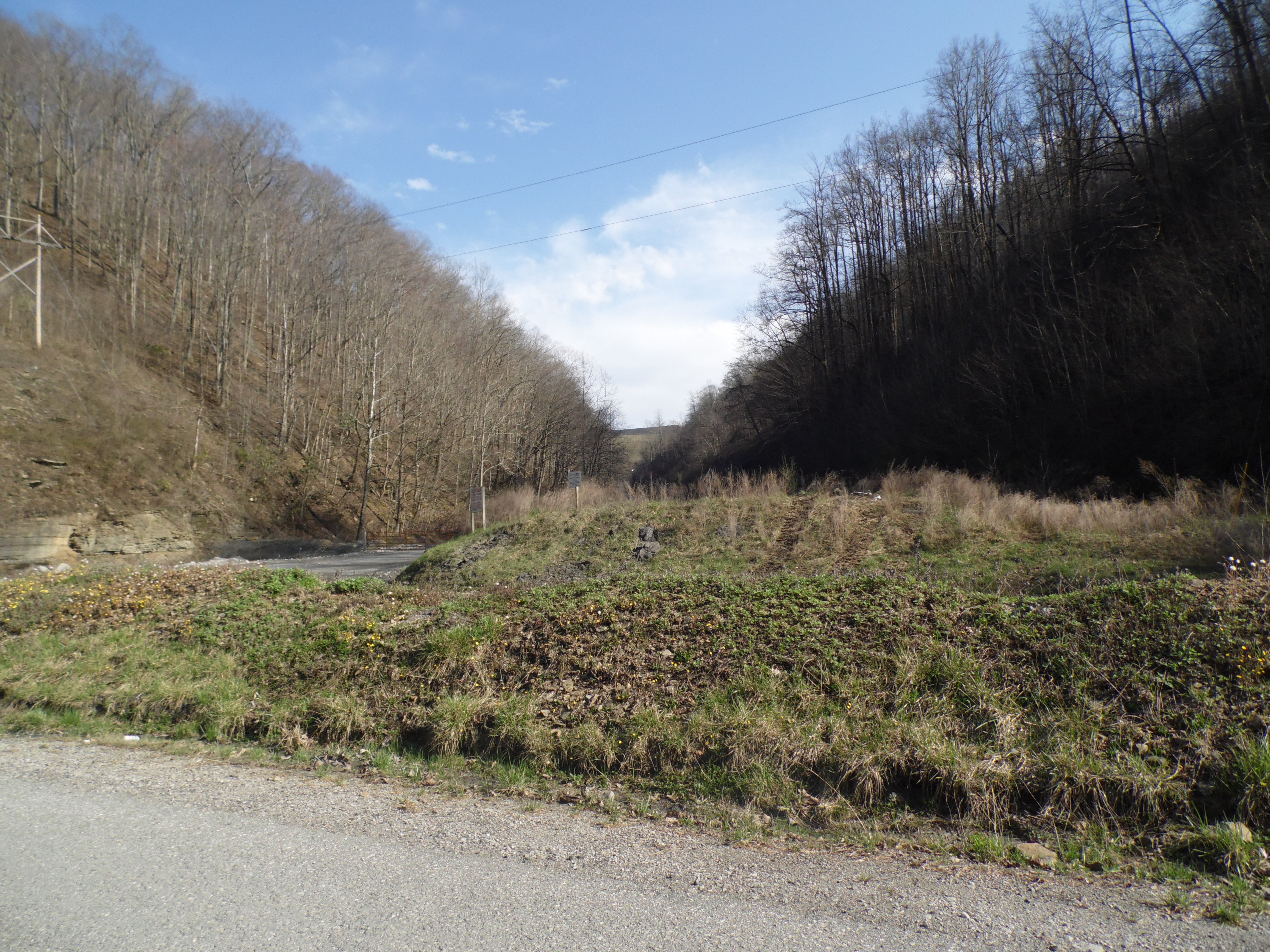 The Piston Coal Company and its subsidiary, The Buffalo Mining Company, claimed that the devastating events that unfolded on that day were nothing more than an act of God. This claim was intended to remove liability from the company and was supported by Governor Arch Moore. Despite the claims the flood was an act of God, three separate commissions would find that Piston Coal Company disregarded several safety violations. The total damage exceeded 100 million dollars. The Piston Coal Company contributed only one million dollars to the clean-up and recovery efforts. The remaining costs were paid by local residents and taxpayers, and most of the property that was destroyed was never rebuilt.

Reports by mine inspectors prior to the disaster confirm that the leaders of the Piston Coal Company were aware of the unstable condition of the dam as a result of two minor cracks that had resulted in in a series of small spills. Tragically, these small spills resulted in several false reports that the dam had burst. As a result, many residents believed that the warning they received that cold February morning was just another exaggerated story. The initial disbelief contributed to the high death and injury toll.

The disaster led to new government regulations. A year after the disaster, the Dam Control Act of 1973 placed stricter regulations on the construction and maintenance of dams. Five years after the Buffalo Creek Disaster, President Carter signed the Surface Mining and Reclamation Act (SMCRA), establishing federal standards for coal slurry impoundments and for the reclamation of strip-mined land. This is a key piece of legislation that helps to prevent another such tragedy from occurring.

The Buffalo Creek Flood Memorial was expanded on the 25th anniversary of the Buffalo Creek Disaster and the 20th anniversary of the Surface Mining Reclamation Act to include a granite memorial resembling a tombstone with the names of the 125 people killed or still missing. The monument was dedicated during a wreath laying ceremony in August of 1997. The honorary wreath laying event was attended by the regions representative to the United States House, and community members. That event was co-sponsored by the West Virginia Organizing Project and the Citizens Coal Council, a group that actively serves as a coal industry watch dog.

During the summer of 2005 the official historic marker was placed very close to the community memorial. The marker was placed by the West Virginia Division of Archives and History as part of the WV Celebration of 2000. The steel plaque titled, “Buffalo Creek Disaster” reads,

“One of (the) worst disasters in (the) US occurred here 26 February 1972, when Buffalo Mining Co. impoundment dam for mine waste broke, releasing over 130 million gallons of black waste water: killed 125; property losses over 50 million; and thousands left homeless. The commissions placed blame on ignored safety practices. Led to 1973 Dam Control Act and $13.5 million class action legal settlement in 1974.”.

In 2009 state delegates who represented Logan County introduced special legislation. The legislature changed the name of Hwy 16 from "Buffalo Creek Road" to "Buffalo Creek Memorial Highway". The highway spans 17 miles. The two signs on the furthest point of the highway mark the beginning and end of the tragic flood. Following the dedication of the highway in 2014, artist Kevin Ledo was brought in from Montreal, Canada. He is responsible for painting, “Buffalo Creek Memorial” a mural on one of the few buildings the survived the flood.