This historic complex works to to preserve and interpret historic farm life on the Ohio River. The restored 1837 Farnsley-Moremen House is the highlight of the 300-acre property. The site was originally a farm that prospered thanks to its location along the Ohio River. This river landing was instrumental for area farmers as they transported their grain and other farm products. Today, the property is owned and managed by Jefferson County, and contains a number of interpretive exhibits. In 1989, an archaeological survey of the grounds was conducted by the University of Kentucky. The site was added to the National Register of Historic Places. 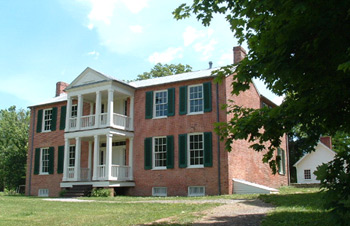 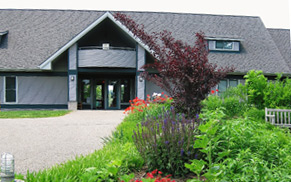 Riverside, The Farnsley–Moremen Landing is a historic 300-acre farm and house in south end Louisville, Kentucky. It sits along the banks of the Ohio River. The house, a red brick I-house with a two-story Greek Revival portico, was built around 1838 by Gabriel Farnsley. Farnsley died in 1849 without a will. After about 12 years of legal wrangling over his estate, the ownership of the house transferred to the Moremen family in 1862. Alanson and Rachel Stith Moremen increased the size of the farm to 1,500 acres, making it into one of the largest farms in Jefferson County before it was divided up amongst heirs in the 1880s.

From around 1820 to 1890, the property served as a river transportation hub. A riverboat landing on the property allowed people traveling by river to stop to trade goods, pick up boiler wood for fuel, or rest. The Moremen family nicknamed the landing "Soap Landing," as they sold lye soap and other household and agricultural products there. In addition, a ferry carried people and goods back and forth between the landing and Indiana.

Like many other structures along the Ohio River, the house was damaged by the Ohio River flood of 1937. The house was left unrepaired for decades. The Moremen family held on to the property until 1988, when they sold it to Jefferson County Fiscal Court for purposes of restoration and preservation. On Oct. 10, 1993, the restored house was debuted to the public. A visitors center situated on the property houses an auditorium, museum exhibits and a store.

Along with evidence of prehistoric Native American camps, more nineteenth-century buildings were found including a barn, detached kitchen, washhouse and slave tenement. The kitchen has been restored and a garden has been added. Volunteers grow heirloom vegetables similar to what the Moremen’s would have grown. The visitor center is the place to begin your exploration of the grounds, offering orientation exhibits and a museum store. Tours include the house and detached kitchen with guides focusing on daily farm life on the Ohio River.