Fairmont Senior High School, located in a residential neighborhood in Fairmont, West Virginia, is one of three public high schools in Marion County. The school itself dates back to 1877, and the current building was completed in 1929. Located on a picturesque, partially-wooded campus, Fairmont Senior High School was added to the National Register of Historic Places in 2002. It currently has an enrollment of around 800 9th-12th grade students.

Fairmont Senior High School. View of the front of the main school building. 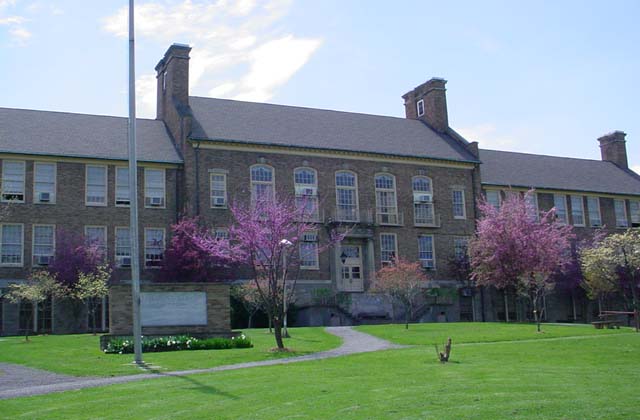 Fairmont Senior High School, located in a residential neighborhood northwest of downtown Fairmont, West Virginia, is the oldest of three high schools in Marion County. The school houses grades nine through twelve, and currently has about 800 enrolled students. The school was listed on the National Register of Historic Places in 2002.

The main building, designed by St. Louis architect William B. Ittner, was completed in 1929 and reflects the colonial revival style that was popular at the time. The brick building sits at the top of a hill on the picturesque, partially wooded campus. Loop Park Drive, open only to foot traffic, leads to the main entrance of the building. Built to be fire-proof, the building was put to the test when a fire broke out in the library in the 1970s; damage was minimal. More recently, the building has been victim of flood damage, which was minimal as well. One of the most unique features of the building is the stone inscriptions above the entrances, as well as another on a stone plaque near the building’s main entrance. The inscription on the plaque reads, “Fairmont High School / Knowledge is the great sun in the firmament – life and power are scattered with all its beams." The inscriptions above the other entrances read, “And God said let there be light / and there was light”; “Achievement / Live in deeds – not words"; “Opportunity / Act in the living present”; and “Let the people know the truth and the world will be safe”. The building’s interior includes all original flooring, stairs, and handrails. The auditorium includes a balcony and seats almost 1,000 people. It was restored in 2001-02, but still includes all original light fixtures and wood seats. A small, open-air brick courtyard in the center of the building formerly known as Senior Court was roofed in the early 2010s and now serves as the media center.

The building is the third one to house Fairmont Senior High School. The original Fairmont High School graduated its first class in 1877, and was housed in a building it shared with the Fairmont Normal School. Due to increasing enrollment, the school moved to a new building on 5th Street; the graduating class of 1915 was the first to have finished their education in the new structure, which continued to house the school until the current structure was built.

Several schools in the Fairmont area have been closed over the years and Fairmont Senior now serves their former populations. Dunbar School, which served the Black population of Fairmont, was closed following the decision in Brown v. Board of Education to desegregate public schools; 1954 was its last year to have a graduating high school class. Black students were moved to the nearest white school, and many attended Fairmont Senior. Thomas C. Miller School served as a junior high school; students attended until the 9th grade, and then entered Fairmont Senior in 10th grade. Following the school's closing in 2008, 9th grade students from the school were moved to Fairmont Senior. Another example is Rivesville High School, which has served as an elementary/middle school since the high school was closed in the early 1990s.

The school colors for Fairmont Senior are royal blue and white; red is now included on some uniforms as a secondary color, a nod to a school color from the former Rivesville High School. The nickname for the school sports teams is “polar bears.” One of the original coaches at the school had the name Ice, and his players were referred to as “Ice’s Men.” The arctic theme eventually inspired the official nickname “polar bears.” Formerly a AAA school, Fairmont Senior now competes at the WV AA level, along with rival East Fairmont High School. Notable alumni from the school include Mary Lou Retton, the Olympic gold medal-winning gymnast who attended the school for her freshman year before moving to Houston to train for the Olympics; Jarod Prickett, a Gatorade National Player of the Year in basketball who played in the NBA; and Dave Tork, who at one time held the world record in the pole vault. The school also boasts a marching band, concert band, percussion and jazz ensembles, a steel drum band, and several choral groups.