James Rumsey was born in 1743 to a Maryland farm family. Rumsey volunteered for service in the Revolutionary War. Though Rumsey’s mechanical aptitude was apparent to many in the community he also engaged in several other ventures. He associated with Nicholas Orrick in a mercantile venture. He was also involved in the operation of a boarding house, and he served as the Secretary of the Potomac Improvement Company.1 Rumsey’s work on his steamship began in earnest when he left his post with the Improvement Company. In October 1783, Rumsey’s first steamship completed a successful trial. Accompanied by his brother-in-law Joseph Barns and business associate Nicholas Orrick, the group conducted the trial at night so as not to be discovered. After the successful trial, Rumsey submitted petitions to the Maryland Legislature and to the General Assembly of Virginia as a means to protect his invention. Among the individual inventions described in the petitions were a “cylindrical saw mill” and a “pipe boiler”. The U.S. had not established a patent office at this time. Both States passed acts protecting Rumsey’s work, protecting his work for a period of 10 years. George Washington witnessed a functioning model of Rumsey’s boat in 1784, and provided testimony to the ships functionality in Rumsey’s petitions. The two men corresponded as Rumsey’s work advanced.2 In 1785, Rumsey directed Joseph Barnes, who constructed the hull, and blacksmith Captain Jacob Haynes, who aided Rumsey with the ironwork; in building, a full-scale steam vessel.3 Improvements were made between the working models and the boat used in the public trial. The original “pipe boiler” was improved, as were other mechanisms that carried steam.4 Working in great secrecy, the hull was moved to Sir John’s Run, near Shenandoah Falls, by Barns and Dr. McMechin. Mechanical components were manufactured in Shepherdstown, Baltimore, and at the Antietam works. Parts were stored in the cellar of Francis Hamilton. As the next trial date approached, the men began to assemble components. Some of the parts did not fit properly and required additional time to correct and assemble.5 Rumsey’s design was unique. His design featured a steam-operated piston that drew water up into a chamber on the up-stroke, and discharged water out the stern on the down-stroke.6This design generated the force required to propel Rumsey’s boat forward against the current of the Potomac River. In the summer of 1786, high water on the Potomac caused the boat to move down stream where it crashed. Repairs were made throughout the spring and summer of 1787.7 A public trial on the Potomac River at Shepherdstown was set for December 3, 1787. Time was not an ally of James Rumsey. A rival, John Fitch an inventor working in Philadelphia, was also constructing a steamship. George Washington wrote to Rumsey on January 31, 1786 imploring him to bring his ship to public trial. Washington stated that Finch asked Washington to testify to the differences between the two designs. Washington admitted that he was not at liberty to divulge detailed information about Rumsey’s design.8 A media war developed between the two men and their supporters. Rumsey’s ship was a success. Witnesses stood on the hills, looking down at the river. Rumsey’s ship carried 7 to 8 tons of stone and several passengers. The ship achieved a speed of three miles an hour. Maneuvering up and downstream the ship completed its trials to the cheers of the crowd which include Revolutionary War General Horatio Gates.9 Encouraged by Benjamin Franklin, Rumsey set out for England in 1788 in order to secure patents and to continue his work. The First Rumseian Society was established with Ben Franklin as president.10 Rumsey was able to secure four patents while in England.11 Rumsey raised money toward the construction of a new design while in England. The ship was completed and was set for trial on December 22, 1792. Rumsey died the day before his new ship was to launch.12 The Second Rumseian Society was formed in 1903 in order to construct a monument in the hills above the Potomac River in Shepherdstown. The Third Rumseian Society formed in 1984 in order to build a functioning replica of Rumsey’s steamship. The project was entitled the “Rumsey Experiment” was successful, the replica maneuvering the Potomac River.13 The replica of Rumsey’s steamship is housed in the Rumsey Boathouse behind the Entler Hotel in Shepherdstown 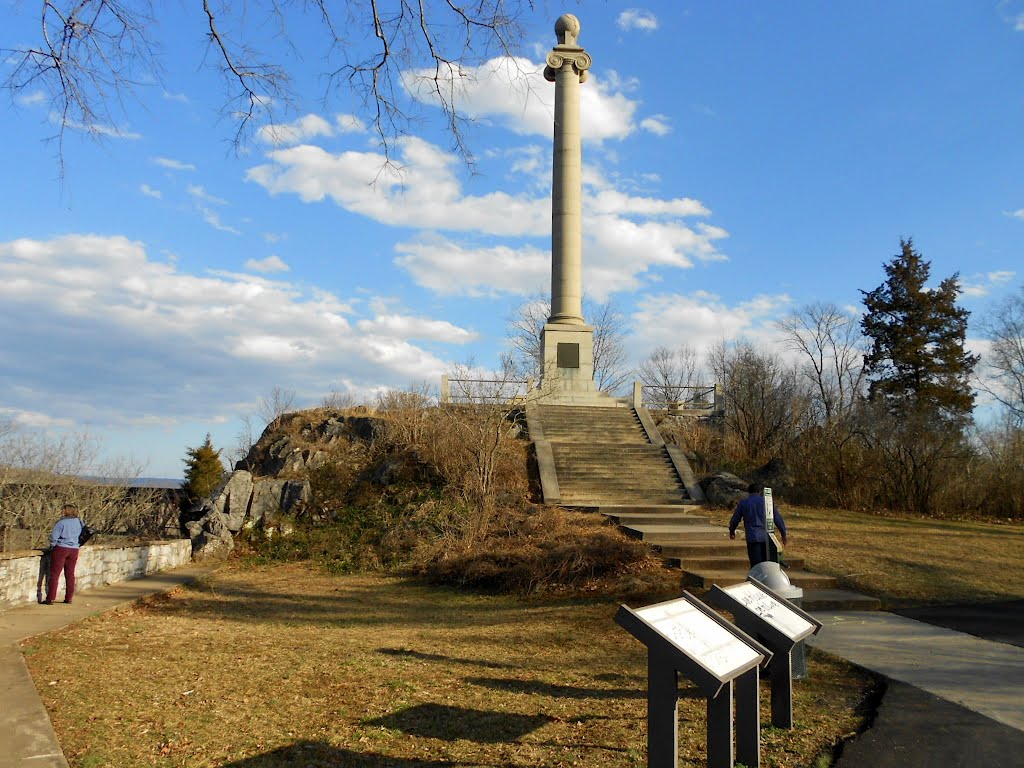 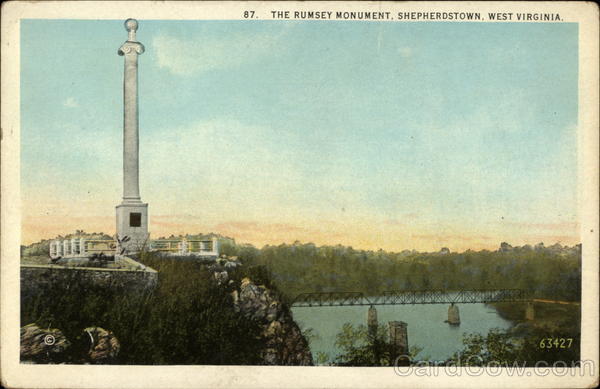 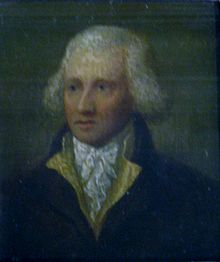 This is the bronze plaque located on the monument. Written by Beltzhoozer. 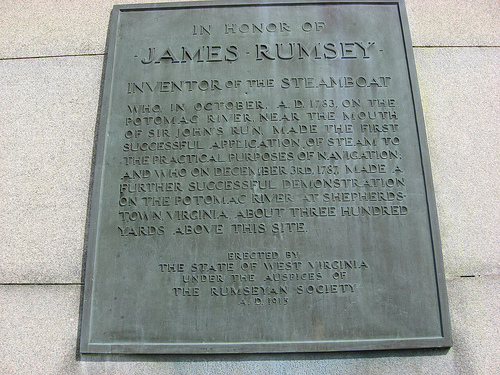 This is a image of the monument from across the river. 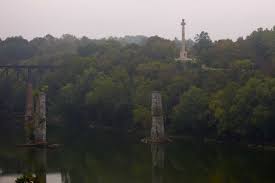 The Rumsey Monument is a 75 foot granite columnn overlooking the river in Shepherdstown, West Virginia. The Monument is dedicated to James Rumsey, the Potomac’s own pioneer of steam navigation. The monument is set here because it is overlooking the very place where Rumsey first publicly launched his steam powered boat. Rumsey traveled to London to present his steam powered boat to the world. Unfortunately Rumsey passed away just shortly after arriving to London. His competitor Robert Fulton would receive credit for creating the first steam powered due to Rumsey's death.14
The first ideas of creating a monument in the honor of James Rumsey came through the jealousy of the Shepherdtonians toward his competitor Fulton in the 1830s. The early steps might have dated back to the 1830s, but the first real steps taken toward the creation did not come until the 1890s by local Congressman Boteler. Around 1890 Boteler began corresponding with the Norfolk and Western Railroad for the present Shepherdstown site, where the railroad had a small quarry, and seems to have gotten from them an agreement to donate the land.15 Unfortunately he would pass in 1892, before any ground could be broken.
George M. Beltzhoover Jr. took over the effort from Boteler to get a monument built. Beltzhoover created the very first Rumseyan Society and their main project was to get the monument built. In his efforts to get the monument build he wrote a letter to the West Virginia Historical Society in 1900 that stated: said: "It was long the cherished hope and desire of the late Hon. A.R. Bottler and his earnest effort before our State Legislature and elsewhere to have erected on the summit of the high, rocky cliff on the Potomac at Shepherdstown overlooking the scene of Rumsey's early experiment, a sizable monument to his memory."16 Shortly after the West Virginia State Legislature and some local donations contributed enough funds to contract a company to build the monument. A contract was completed in 1913 with the Forbes Granite Company of Chambersburg. This was the same company who who had not long before done some of the Civil War monuments at the Antietam battlefield. The monument was finally completed in 1915.
The Rumseyan Society donated the monument and the park to the town of Shepherdstown in 2007.17