Also known as the "Mission by the Sea", California’s ninth Spanish mission was founded on Easter Sunday, March 31, 1782 by Father Junipero Serra. Though originally intended to be the third in line, it proved to be Serra’s last--the famous founding father of the California missions would die two years later, and his successors built the remaining twelve. Despite decades of neglect after the missions were secularized by the Mexican government in 1833, San Buenaventura was the seed for the modern city and county of Ventura. Today the church is fully restored to its original design, and maintains an active chapter of Franciscan monks. In addition to a museum, an archive was founded in 2012 to preserve documents and artifacts important to the mission’s history. 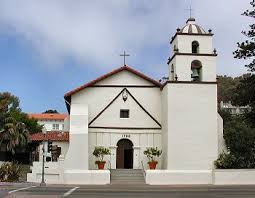 San Buenaventura Mission in 1877, in a photograph by Carleton Watkins, a famed photographer of the American West--particularly of California. 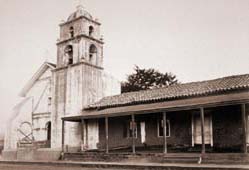 Edward Vischer's sketch of San Buenaventura, published in the 1870s. Vischer's sketches are sone of the best visual references for the era in California (UC Berkeley, Bancroft Library). 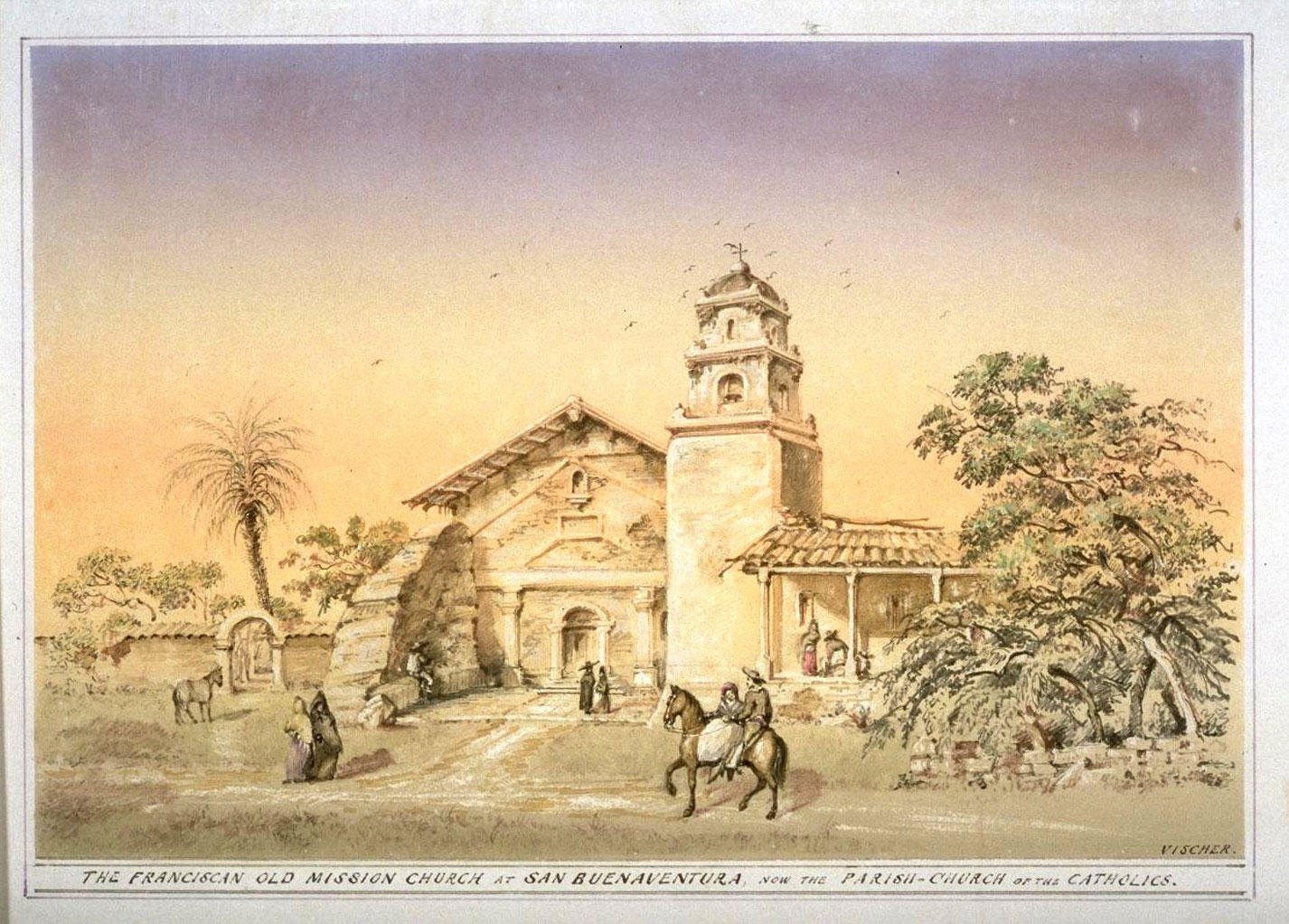 Henry Miller's works hearken from even earlier. His sketches from 1856 are the first known attempt to depict the California missions in a series (UC Berkeley, Bancroft Library). 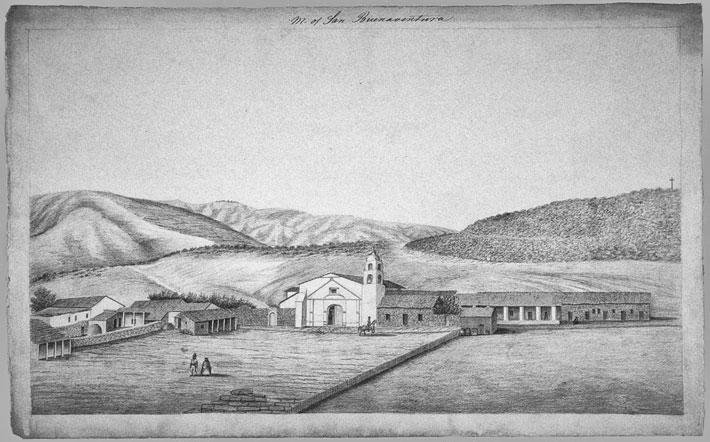 Another view of San Buenaventura in 1877 by Carleton Watkins. Note the severe dilapidation of the quadrangle. Serious restoration work took place gradually over the next hundred years. 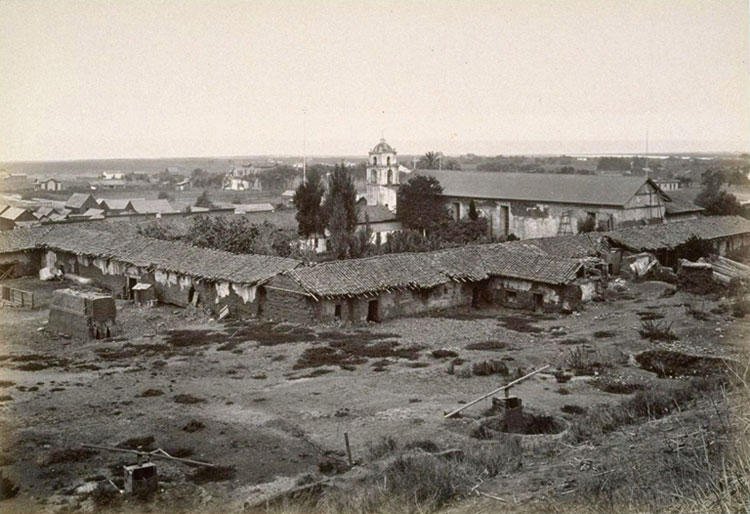 A 1930s Works Progress Administration survery of the site displays the layout of the mission's buildings. 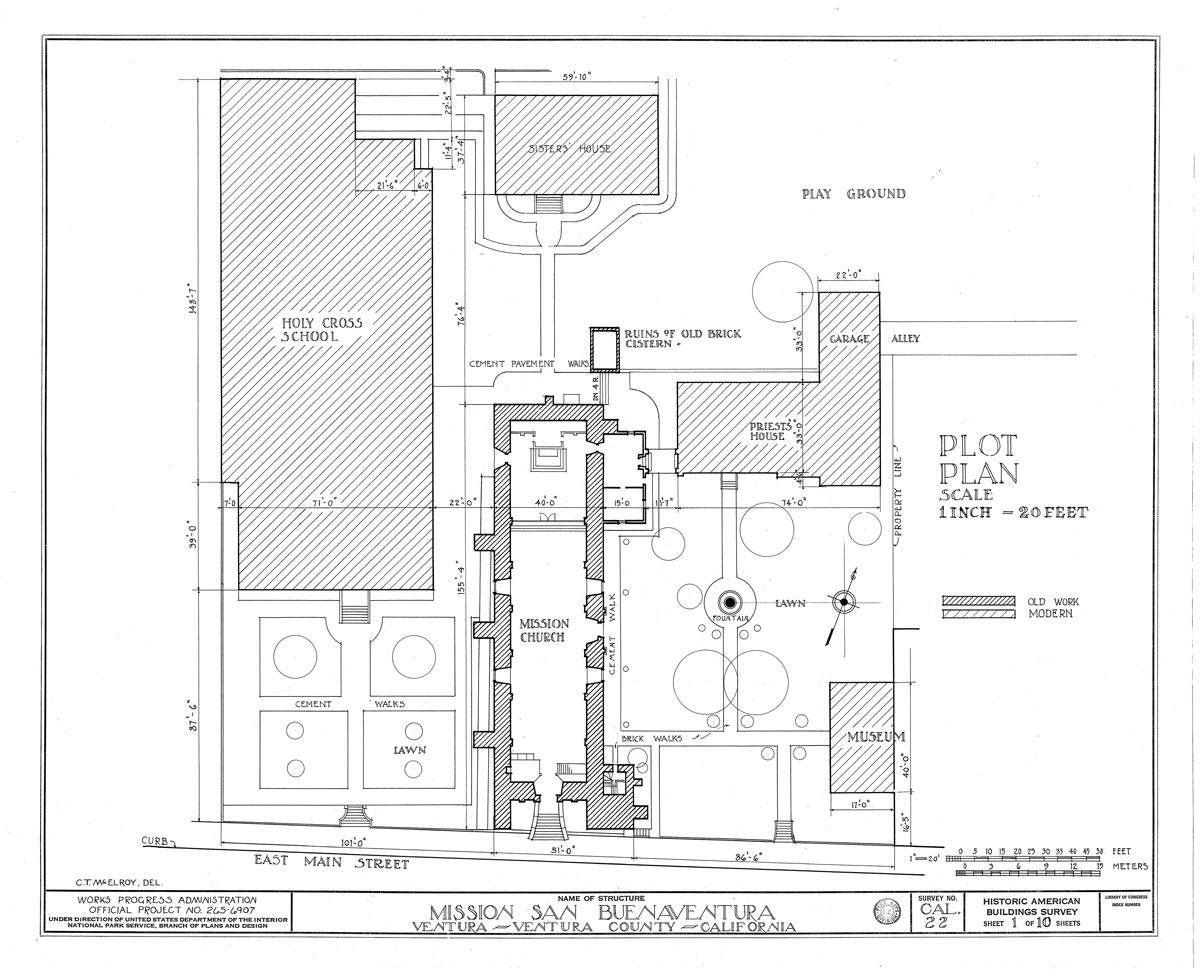 A depiction of the mission grounds at the height of San Buenaventura's prosperity in 1818, overlaid on modern Ventura streets. Courtesy of SanBuenaventuraMission.org. 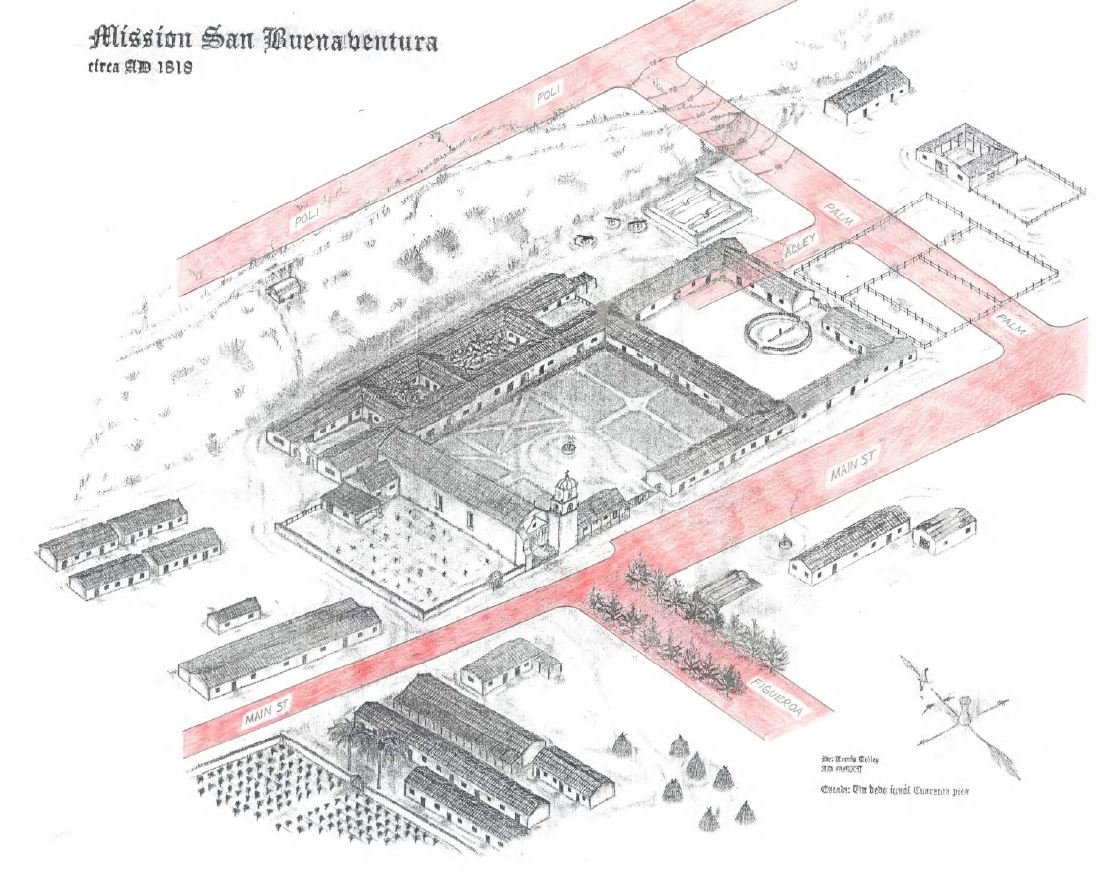 San Buenaventura was the last mission to be founded by Father Junipero Serra. He died two years later. His canonization by Pope Francis in 2015 was highly controversial--many Native Americans view Serra as an instrument of cultural destruction. 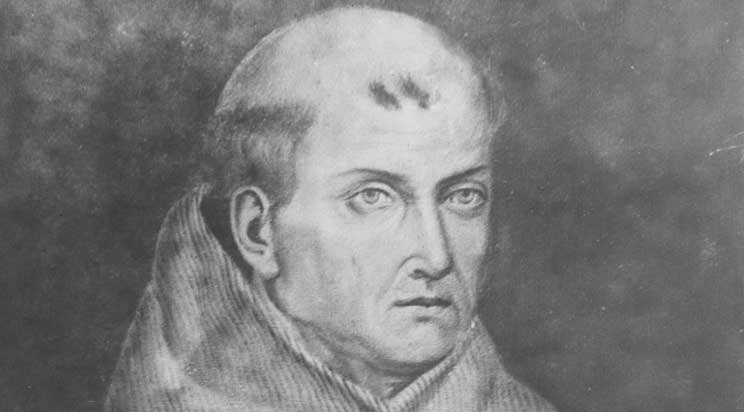 The numerous Chumash near Buenaventura were friendly to the Spaniards. Their long seagoing canoes and basket-weaving were feats of engineering, and highly prized throughout California. 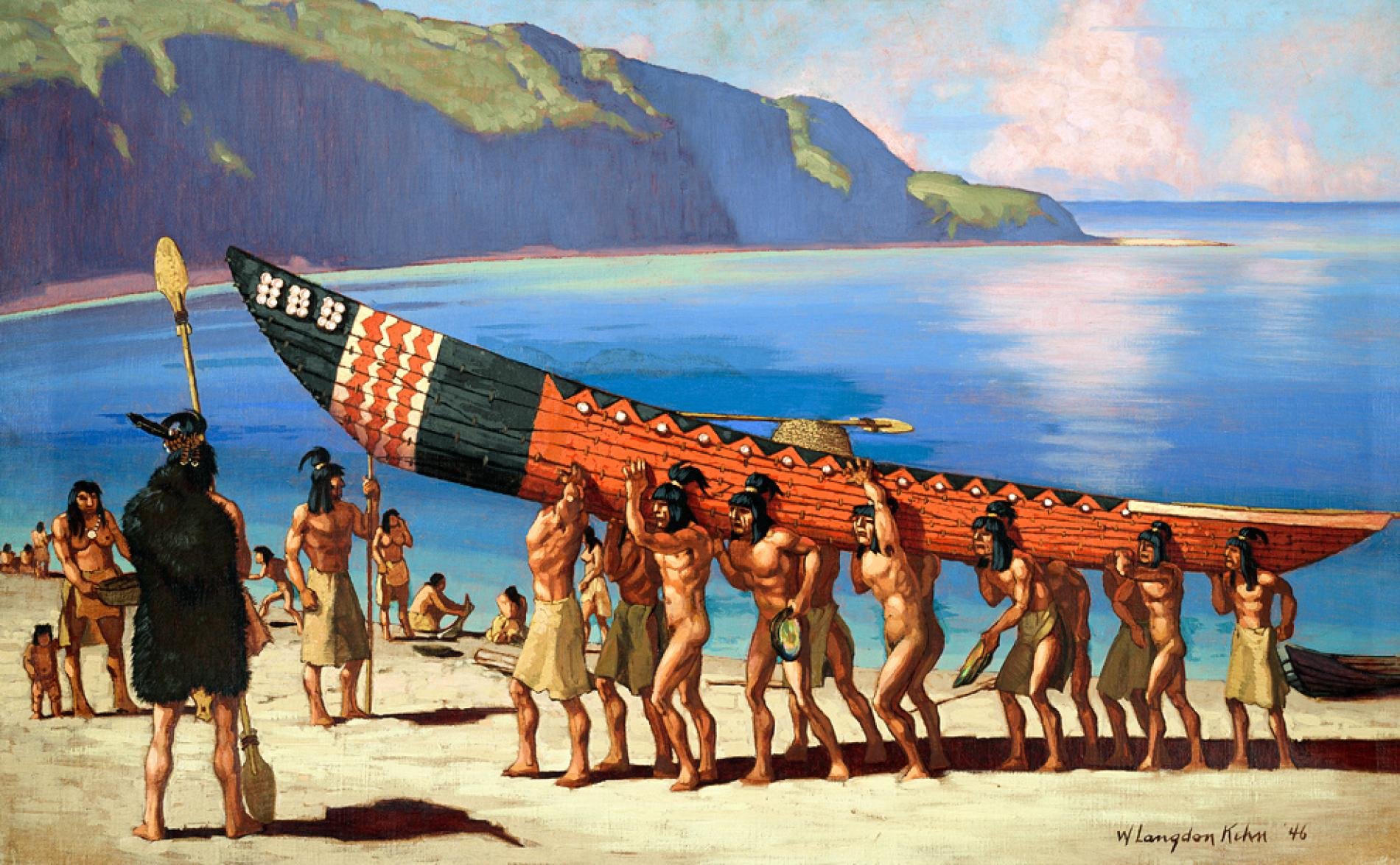 Though Father Junipero Serra had great latitude in the establishment and administration of the Franciscan missions in California, the timing and region of each founding was subject to approval from Spanish viceroys and governors in Mexico. Small contingents of Spanish troops accompanied each new pair of friars as they set forth to establish a new mission--and after all, one of their objectives in Alta California was to prevent the Russians and English from colonizing the new land first. Circumstances beyond Serra’s control thus kept Mission San Buenaventura from being the third mission.

It was, in fact, the ninth, and its founding was so plagued by various delays that a full five years separate its establishment from the previous mission, Santa Clara de Asis--delays that included Native American unrest in San Diego and a massacre of Spanish settlers on the Colorado River by Yuma Indians in 1781, prompting concerns that stronger military escorts would be needed for future missions. Governor Felipe de Neve’s plans for California also diverged from those of Serra--the Franciscans responded by refusing to send more missionaries until Neve allowed Serra to found San Buenaventura along traditional lines. Finally in 1782, only six months after the British defeat at Yorktown, Father Serra and Father Benito Cambon departed Monterey with seventy soldiers, a number of settlers and Governor Neve himself (who was soon called to Los Angeles on urgent business).

Seventy miles north of Los Angeles, Serra planted the cross that officially established the new mission, which would be called San Buenaventura after the Catholic Saint Bonaventure--a medieval theologian and early central figure to the Franciscan order. Serra gave a sermon to accompany the Easter Sunday ceremony, then departed shortly thereafter. Father Cambon supervised the mission’s construction, including a seven-mile aqueduct to irrigate nearby fields and gardens. Buenaventura quickly prospered, despite the destruction of its first church by fire in 1793. Construction of the second church took sixteen years. A mere three years after its completion in 1809, a devastating earthquake in 1812 severely damaged the new church and forced the mission to evacuate.

Yet Buenaventura and its constituents thrived, achieving peak population in 1816 with roughly 1,300 Chumash neophytes (later called “Ventureños”). The establishment was noted for its gardens: “...far exceeding anything I had before met with, both in both in quality, quantity and excellence of variety. Not one specia sown or planted that had not flourished,” claimed English explorer Captain George Vancouver.

In 1818, the congregation fled to a chapel several miles away for fear of the marauding Argentine pirate, Hippolyte Bouchard, who terrorized or raided several California missions that year. A few years later the Hidalgo Rebellion in Mexico cut off the flow of Spanish supplies, souring relationships between the Chumash and disgruntled Spanish soldiers. The mission entered a steady downward spiral, prompting the newly-arrived Father Jose Senan to write in 1823, “Here I am...taking over the reins of this ministry (already half in ruins).”1 By 1827, passing French Captain Duhaut-Cilly saw only “a poor establishment with a bad anchorage. We did not stop.”4

The mission was secularized in 1836, its lands falling to the Mexican government under the pretense of being dispensed more equally to the Chumash. Little was done about it, however, as rival claimants to the California governorship began a small civil war in 1837. Two small armies, likely not totaling more than 100 men, met and fought at San Buenaventura in March of 1838. One side occupied the mission itself, defending from its quadrangle and bell tower, prompting two days of sporadic firing and one recorded death. Some cannon were involved, and up until 1874, scars could still allegedly be seen from the impact of cannonballs on Buenaventura’s tower.

The community languished from 1840 until the beginning of the Civil War, when President Lincoln granted the missions back to the Catholic church by proclamation. In 1862, however, a catastrophic flood destroyed the mission’s dilapidated aqueduct, and in 1893 a new head priest led a “restoration” that erased much of Buenaventura’s historical architecture and frescos. True restoration was undertaken in the 20th century, restoring the original windows and church by 1957. By then, however, the modern city of Ventura was encroaching on the old mission lands, and many of the old auxiliary buildings had vanished.

The Catholic church maintains the present Mission San Buenaventura as an active parish within the archdiocese of Los Angeles, and in recent decades had to add several buildings to accommodate the growth of the mission’s school. Ruins of some of the auxiliary buildings were uncovered during the excavations and have been preserved. A museum and archive, as well as extensive public access to the grounds, continue to bring the mission to life for visitors.