In 1960, C. Wright Mills wrote a powerful essay to the New Left Review that dismissed the original concept that a working-class would bring about a societal shift, and instead provided allegorical evidence that “the young intelligentsia”[1] would provide the necessary momentum. This call to action appealed to students everywhere, including at the University of Texas, because they felt a need for authenticity and direction. These educated students who took action against issues of war and race found a home in the local chapter of the Students for a Democratic Society (SDS), which became a prominent proponent of the New Left perspective in Austin. After its founding as a campus organization, many of SDS' protests took place on the South Mall of the University of Texas, including the Freedom Movement Rally held at this location in 1967. 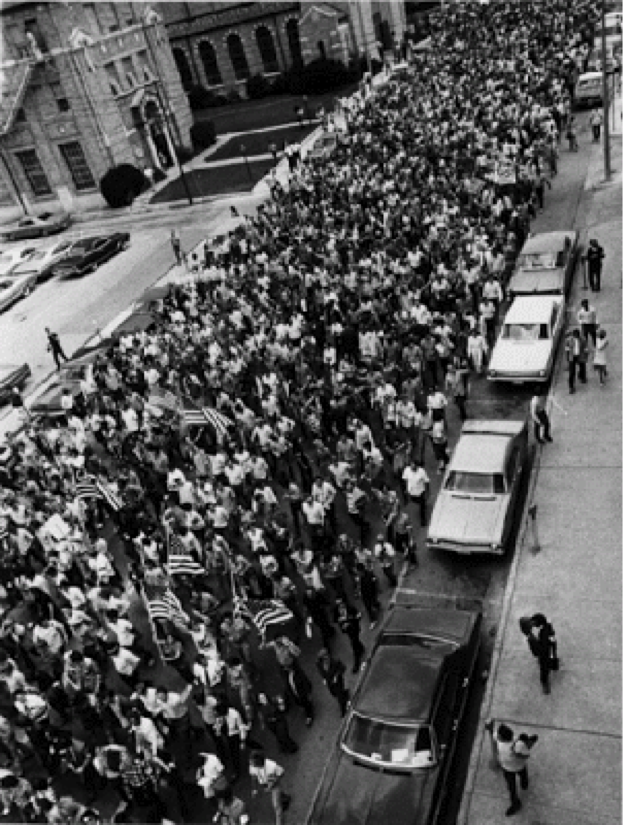 The disparity between the races grew wider and many had the time to notice, including the college-youth of the day. Thus, a contingent of students met in Ann Arbor, Michigan and drafted The Port Huron Statement[3] and the Students for a Democratic Society was born. This organization provided the opportunity for those on the 40 Acres to express their outrage at the oppression around them, to fight against the United States and establishments on the Drag, and have a voice through participatory democracy.

The storefronts located on Guadalupe across from campus contained restaurants and movie theaters that students frequented for dates, studying, and leisure. All of these students were White because these establishments refused to serve Blacks. Members of SDS like Casey Hayden started the Students for Direct Action (SDA)[4] at UT and used the University YMCA as a meeting place to discuss how to handle the situation.

Shortly after the Greensboro sit-in movements, the SDA began “stand-ins” along the theaters on the Drag[5]. Black students would approach the ticket counter and ask for a ticket. When refused, they would go to the back of the line. Whites would ask the salesperson if they served black patrons. When told no, they went to the back of the line as well. These actions were repeated for hours on end, holding up sales and tamping profits for the theaters.

Between 40-200 people participated in these events daily (3 nights/week)[6]. This had a more immediate impact than the peaceful, voluntary resolution that Austin’s Human Relations Committee had established[7]. After over 6 months of protest, these restaurants caved and began serving students of all color. With one target down, the behemoth still loomed: the war in Vietnam.

In mid-October 1965, SDS held a death march protesting U.S. policy toward Vietnam. Members of the radical student organization rallied the members of the University of Texas chapter to show dissatisfaction in the Federal Government and disapproval of the continuation of use of the United States ground, air and sea forces in Vietnam. The first of many protests to occur on the grounds of the University of Texas campus had few participants and received enormous backlash. Some UT students even started counterprotests. Undeterred by the negative publicity, SDS continued its protest and increased the rhetoric of the campaign.

The most notable of the antiwar protest was when members of SDS protested Vice President Hubert Humphrey during his visit to Austin. “Students for a Democratic Society plan to demonstrate against the war in Viet Nam while Vice President Humphrey speaks in Austin”[9] proclaimed a Daily Texan article dated April 23, 1967. The Vice President was making an appearance to a joint meeting of the Texas House and Senate. When the SDS heard about the Vice President’s visit in Austin, they utilized the opportunity to protest one of SDS’s most passionate subjects, the Vietnam War.

Chancellor Harry Ransom issued a warning to the SDS conspirators telling the Daily Texan that “The University is a public institution, but the present administration will not allow this fact to be used as an excuse for flouting recognized authority by students or non-students on University property.” Defiant, the students ignored the warning and held a massive and controversial protest. The University responded by banning SDS as a recognized school club and a disciplinary action committee was formed to take action against the defiant student protesters. [10]

With SDS removed as an approved school club and university administration attempting to restore order to the UT campus, SDS was effectively gutted from University life. Members began growing more radicalized and militant. Lines between Red, White, and Blue; and just Red became blurred. Members like the Weathermen began bombing Universities associated with the Military-Industrial-Complex. Their meeting topics became more concerned with internal affairs than external[11]. The mighty machine of revolution had collapsed under its own weight. But the triumphs of its time are still celebrated today. A small organization of students proved that non-violent direct action could facilitate change.