Pro-segregation protesters hold up signs outside the theater in a form of counter protest to the stand-ins. AS-61-30610-7, Austin History Center, Austin Public Library. 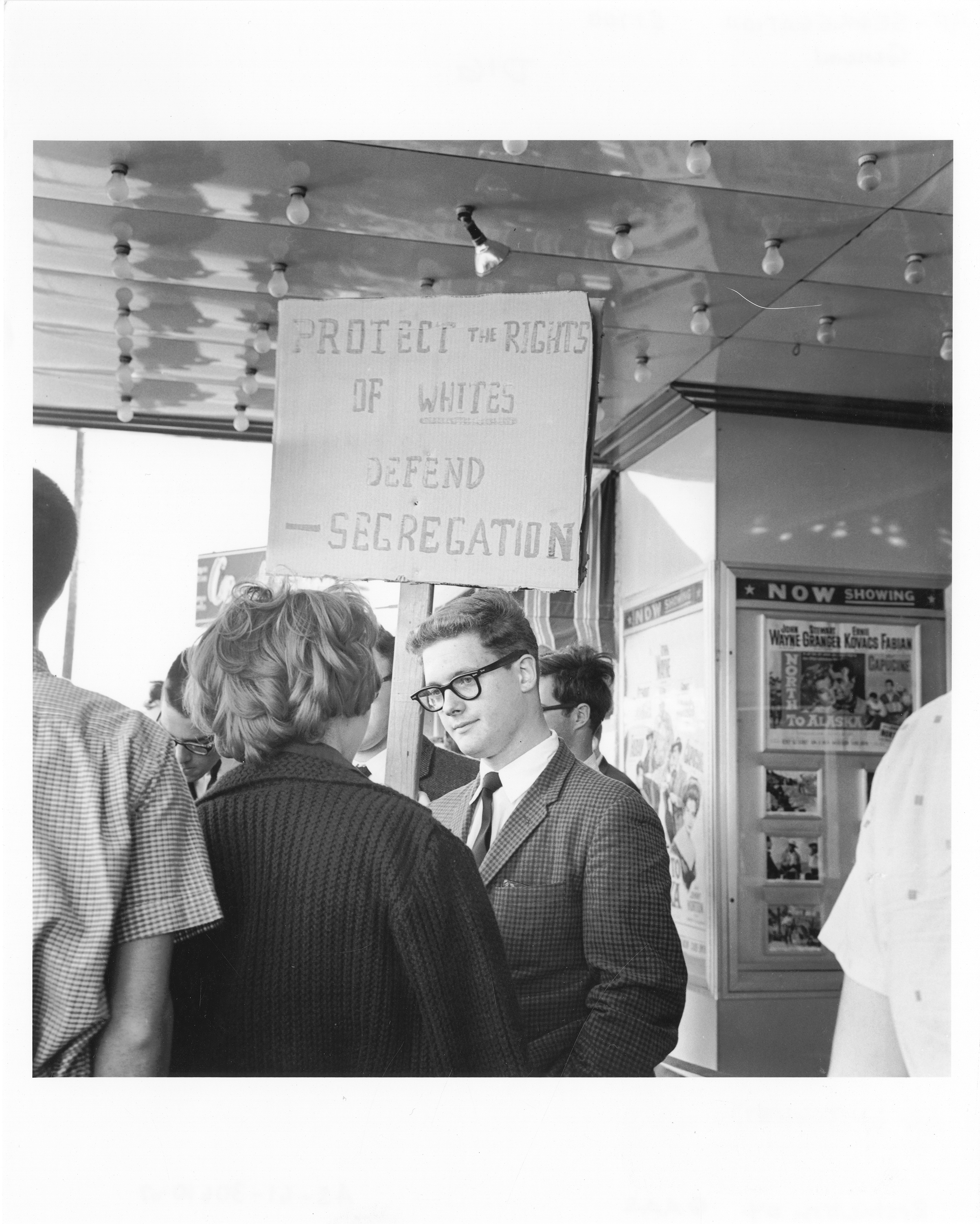 The theater stand-in protests were organized and performed by University students and gained a notable amount of attention during the 60s. Targeting theaters directly near to the University along Guadalupe St., otherwise referred to as The Drag, and started with a popular theater called the Varsity.   The process was simple, quick, but effective, and drew quite a show for both those participating and looking on. Students of multiple races, although majority white, would line up to get tickets from the ticket booth of the theater. As each one individually reached the front, they would say to the sales clerk “I would like to buy a ticket if everybody is being admitted.”  Once the ‘customer’ was told that it was against the theaters policy to “admit Negroes,”  they would leave the line, walk all the way to the back, and get back into the line once again to repeat the process all over. The demonstration was performed with an average of 100 to 150 people every night for several weeks, with the lowest being 40 people and the highest, at the time, being 200.  The long line of protesters would stretch down the street, endlessly restructuring itself as each person came to the front, was told the theater would not break its segregation policy, and then moved to the back of the line. After a week of this at the Varsity theater, students expanded to also protest at the Texas Drag theater, located only a short distance away on the same street.

The organization of the event came under some contention, as students who participated denied that any proper organization committee played a part in orchestrating or sponsoring the events.  Despite this, it is obvious through multiple sources and other evidences that the Student Direction Action Committee, often called SDA, played a big part in both choosing the tactic of the stand-in and with bringing media attention.  That being said, many people joined in on the protests without the help of the SDA, sometimes through different communities across Texas with the same interest of anti-segregation.

The support for the student protests was overwhelmingly positive by the academic community within the University of Texas. By December 9th, only seven days after the first protest on December 2nd, twelve members of the classical languages faculty sent in letters to the Daily Texan to support the protests.  Then, only weeks later, a hundred more letters appeared, many signed by prominent members of faculty.  Even outside of the university, the stand-in protests had fans. In one interview quip by the Texas Observer, a member of the Texas House of Representatives who attended the first demonstration claimed the protest was “… the best thing since the San Francisco riots.”  Eleanor Roosevelt herself wrote in to the Texas Observer, saying that she was “… personally grateful to the Texas students for making the effort to bring about the end of this kind of segregation in their state.”

The climax of these theater protests arrived on January 14th, 1961, when over four hundred protesters organized to stand in front of four Austin theaters, two of which were the theaters already being protested along the Drag.  Afterward, the protests began to slowly dwindle, although they lasted throughout the spring 1961 semester.  The demonstrations did not result in the immediate desegregation of the theaters, but they were successful in bringing attention to the issue on both a local and national scale. Additionally, the stand-ins remained a beacon of civil disobedience, with violence only occurring once when “two Austin youths assaulted some of the demonstrators and were arrested.”  The memory otherwise remains untarnished and stands as a personal success of the 1960s for both students and faculty of the University of Texas at Austin.