This was the location of the University of Texas ROTC Building from 1950 to 2010. The location is now home to the College of Liberal Arts Building. The building was named after one of its own: Russell A. Steindam from the class of 1969. The Army ROTC program continues to operate from this location, with offices and classrooms on the fifth floor of the new Liberal Arts Building. The state and university has produced some of the most decorated servicemen including Medal of Honor recipient Audie L. Murphy, Admiral Chester Nimitz, Navy SEAL Chris Kyle and General Dwight D. Eisenhower. From the mid-1960s to the early 1970’s the UT Army ROTC program molded General Officers, had record number cadets, and a Medal of Honor recipient. The Army ROTC program at the University of Texas at Austin operated out of this building prior to the construction of the current liberal arts building.

Colonel Lawson Magruder Jr. provides advice on the importance of attitude during his last day of class for soon to be Lieutenants. Today, his son, Lieutenant General (Ret) Lawson Magruder III provides the same advice when he visits the program. 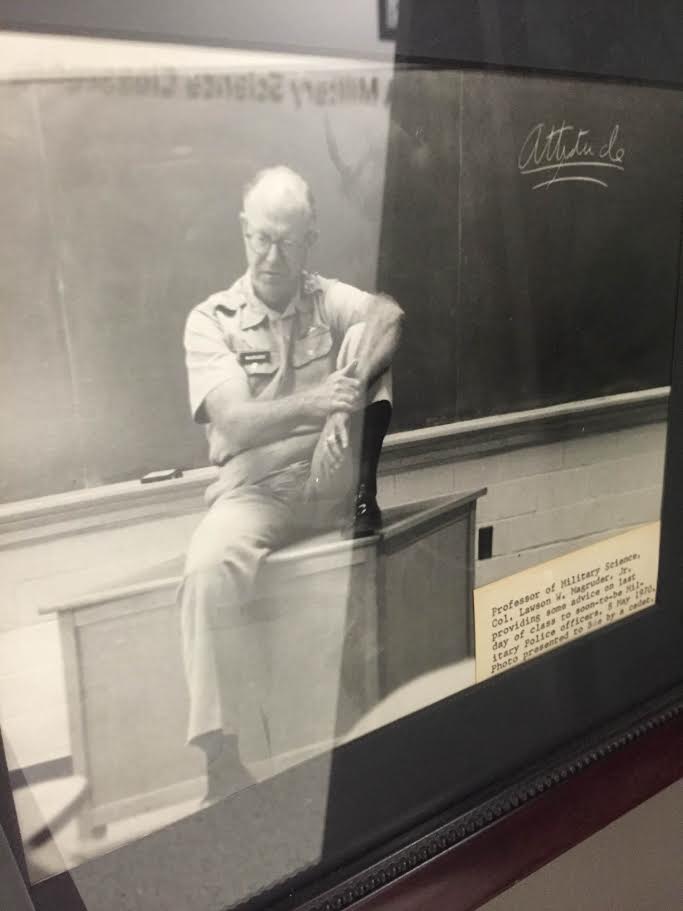 The ROTC program at the university was led by Colonel Lawson Magruder Jr. during the 1960s. Current Military Science Department Chair Lieutenant Colonel David R. Zinnante, who is a product of the UT Army ROTC program, argues that Magruder is the finest professor of military to serve at UT because his appreciation for leadership development.[1] Surprisingly, Colonel Magruder significantly increased the program’s numbers from 337 to 403 cadets upon arriving in 1967, at a time when apprehensions and disapproval towards the war in Vietnam were rising.[2]

Allied victory in World War II and the growth of the military helped Colonel Magruder. The cadets in the 1960s had fathers and brothers who had served in World War II and the Korean War. Retired Lieutenant General Lawson Magruder III, who was in the program from 1966 to 1970, states that he and his peers felt they had to uphold an obligation to their nation with the war in Vietnam escalating as theirs fathers had done twenty years prior. Magruder III later added that the tensions in Vietnam demanded a higher sense of urgency for training since the cadets and the experienced, World War II veteran instructors were certain all the graduates of the program would soon go into combat. [3] Besides Colonel Magruder’s attention to molding young leaders and the awareness of what would occur upon graduation, the ROTC program prospered due to its record number of participation.

In 1967 the Army ROTC program had over 400 cadets enrolled which is still the largest class size to date. The large class size not only provided more cadets to interact with and grow upon but forced the program to alter its command structure. The program was broken into a Brigade consisting of five battalions, allowing for more leadership positions for cadets as they progressed through the program.[4] Furthermore, the vast number of cadets led to each battalion to be a branch within the Army. For example, there were infantry, engineer, and military police battalions. While in today’s ROTC structure all cadets receive the same classroom and field training regardless of what branch of the Army they go on to serve in. The command structure allowed for more in depth training on what they would be doing, which was vital since most ROTC graduates were fighting in Vietnam less than a year upon graduation. The branches within Army ROTC fostered a sense of belonging, creating a positive and competitive environment between both the instructors and cadets.[5]  Upon the US Government’s decision to move to a volunteer Army in 1973, participation in all branches of ROTC declined adversely affecting the productivity and morale of the programs.[6]

The university's ROTC program continues and the College of Liberal Arts has recognized the value of the program that was located here by naming a lecture hall after Medal of Honor recipient Lieutenant Russell Steindam. In addition, the Department Chair’s office is named after Colonel Lawson Magruder Jr.

David Zinnante, interview with author, March 2016. John Boswell, Texas Fight: The History of Army ROTC at the University of Texas at Austin. 2011 (75).

“Time Line A History of UT Student, Staff, and Faculty Struggle.” Retrieved on April 20, 2016 from http://utwatch.org/timeline.html.