Richard Nixon's decision to invade Cambodia in April 1970 became the catalyst for a new series of anti-war protests in Austin and across the nation. After the Ohio National Guard killed four protesters at Kent State University, national protests took on a more emotional and angry tenor, leading to sometimes violent responses from police. [1] Austin was not immune to this national unrest, leading to a week of emotional and sometimes contentious popular protests.

Photo is in the public domain. Source: wikipedia, it was provided by Reid Sullivan. retreived via https://en.wikipedia.org/wiki/Littlefield_Fountain#/media/File:The_University_of_Texas_at_Austin_-_Littlefield_Fountain_and_Main_Building.jpg 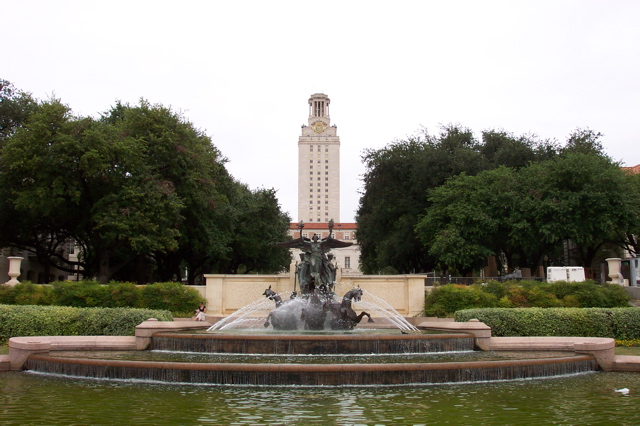 On Thursday, April 30, 1970, it was announced nationwide on radio and television that President Nixon had ordered the invasion of Cambodia.[2] The following day spontaneous nationwide protests began taking place. On Monday May 4, the Ohio National Guard opened fire on peaceful student demonstrators at Kent State University, killing four. Many Austin youth who heard of the Kent State killings were horrified, and they took out their anger through furious public protests. On Tuesday May 5, a mob of 2-3,000  angry student [3] demonstrators “stormed the state capitol.” [4] They threw rocks, breaking several windows.[5] Two cars were lit on fire.[6] At the east mall, cops restored order by throwing tear gas into the crowd, and some students had to wash the residual chemicals out of their eyes and off their skin in the east mall fountain. The confrontation created tensions between police and protesters that lasted throughout the week.

On Wednesday May 6, the flag at the main mall was lowered to half-mast for an extended vigil.[7] An undercover police officer going under the name Karl O. Potts joined the mob and spent the night at the main mall with what he called “the hardcore hippie types.” They passed around marijuana joints, used obscene language, and engaged in intercourse.[8] On Friday May 8, the week ended on a peaceful note when 15,000 anti-war protesters strolled through the back of the University and through the business district of Austin. [9] The parade had been planned to encompass 32 blocks of Austin, but when news reached the students that the city had not sanctioned the parade due to fears of a repeat of Tuesday’s events, they marched two by two on the sidewalks for a few hours. Hundreds of them cooled off by jumping into the East Fountain.[10] But then, good news came from some Austin attorneys: they had received special permission from federal District Judge Jack Roberts to march on the streets. Even though the city had issued an ordinance against the anti-war parade, Judge Roberts had written an indictment that deemed the ordinance unconstitutional, giving them permission to move into the streets on the basis of freedom of speech.[11]

Thus, the first week of May in 1970 that had started with violence ended with a peaceful demonstration. The violence of the national protests reinforced a growing sense of distrust toward government and authority. Events cast doubt on Nixon's promises to end the war and fueled tensions with local authorities. Scholars Jerry Lewis and Thomas R. Hensley claim that the events of the week of May 1-7, 1970 “began the slide into Watergate, eventually destroying the Nixon administration.”[12] In Austin, it represented one of the worst clashes between protesters and police in an era marked by demonstrations.

[5] See pictures from The Austin American Statesman, May 6, 1970, retrieved from the University Briscoe center in Austin on April 19, 2016.