Maxwell Hall used to be called the "old observatory" and is named after Frederick R.Maxwell. The building is one of the oldest observatory buildings in the United States and survived the 1865 fire that destroyed much of the early campus at the end of the Civil War. It now the home of Creative Campus, an organization that works to support and connect students and their creative projects.

The "Old Observatory" in 1891 Photographed by Eugene Allen Smith 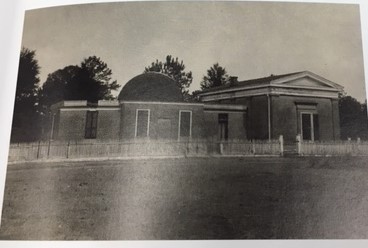 The building was renamed Maxwell hall in 1986 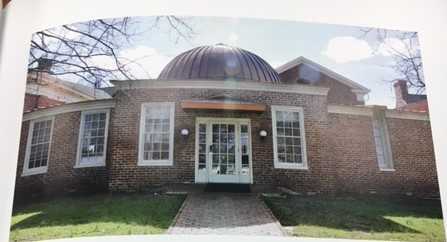 The marker in front of Maxwell Hall building 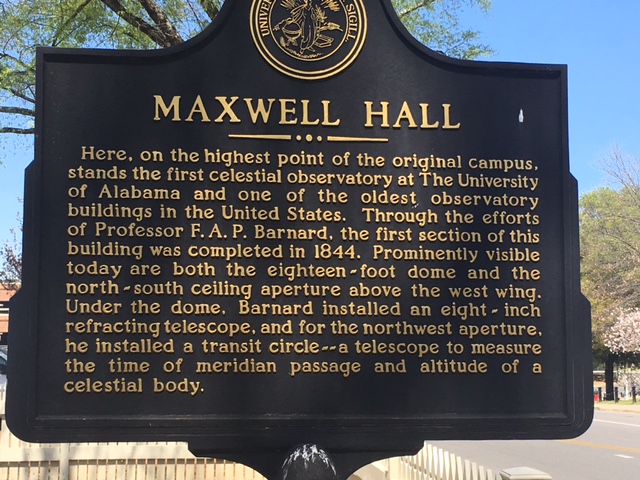 The Old observatory was built on what used to be the highest point on campus. This building was one of the first buildings of its type to be built, and that is thanks to Frederick A. P. Barnard.  Around 1838, he presented business plans to the board of trustees and the original part of the building was completed in 1844. The original portion of the building consisted of a large room capped by a dome and  a small office with a fireplace. This building held the most equipped and latest astronomical instruments of its time. The classroom was not added until 1858.

The Observatory was raided and destroyed in February 1849.  The results of this raid left all the instruments rendered and useless and some were stolen. Some of the furniture was stolen and clocks were set ahead.  No one was held responsible for the ransacking of the building.

This building escaped wreckage from the burning of the university in April 1865. Some sources claim it was not burned down due to the distance it was from campus, but Jerry Oldshue did an interview with Fred Maxwell on April 14, 1978, and Maxwell claims that Mrs. Rufus Chapman saved the observatory. Mrs Chapman was the wife of ex-governor Chapman. She told them that the observatory had no part of the military so they spared the building.

The Observatory was renamed Maxwell Hall in 1986 in honor of the retired consulting engineer Fred R. Maxwell Jr.  He was responsible for protecting and preserving the remains of the nineteenth century campus. This building now serves as the classroom for creativity for the students at the university.