Student Protest of Segregation at the College Inn, 1963-1964

Now home to a popular sports bar, this location was home to the College Inn during the 1950s and 1960s. This popular cafeteria maintained a policy of racial segregation after the University of Florida admitted its first African American students in 1962. In the summer of 1963, the NAACP Youth Council, together with Black and white UF students, began picketing the College Inn and other restaurants and movie theaters that still maintained racial segregation. The pickets continued throughout the summer until a committee was formed to end segregation at this establishment and others. However, white city leaders refused to participate in the negotiations and integration of the College Inn, Florida Theater, and other Gainesville establishments did not occur until the passage of the 1964 Civil Rights Act.

High school and college students, together with community members, lead a protest against segregation at the College Inn. 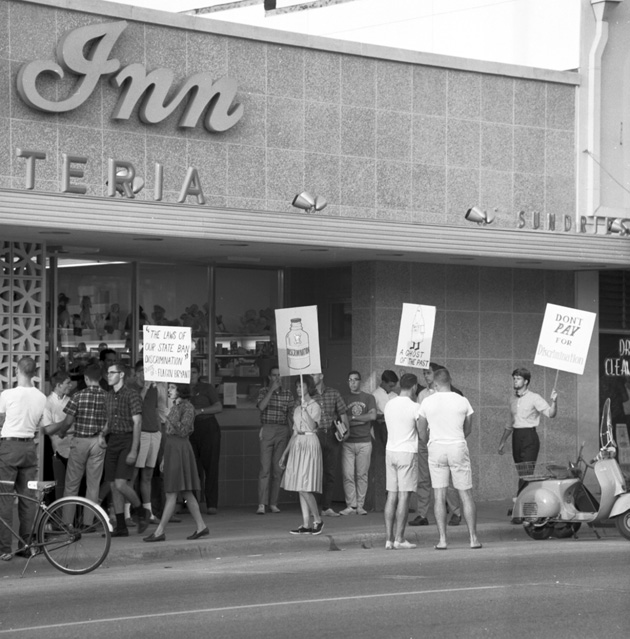 The College Inn was one of many Florida institutions that maintained segregation. The wave of sit-ins that began in Greensboro in February 1960 led to the desegregation of many Southern department store chain restaurants and lunch counters. Throughout Florida and many other Southern states, however, formal segregation continued at many local establishments. The College Inn was one of the last holdouts in Gainesville, and the relatively progressive nature of college students led to this policy being challenged in both formal and informal ways.

For example, oral histories recall that some students celebrated the news of a fire that temporarily closed the College Inn in 1962. The Alligator, the student newspaper at the University of Florida, reported that some of the students who watched the blaze were cheering so loudly that one of the firefighters retaliated by directing his hose stream away from the building and spraying some of the bemused students before returning to the task of saving the building.

The College Inn closed for some time as a result of the fire, and there is no indication that it refused service to African Americans when it reopened, likely due to the growing disapproval of segregation among both white and Black students. Regardless of the perception of students or any decision by the cafeteria's managers, the passage of the 1964 Civil Rights Act settled the issue by requiring equal accommodation at all places that served the public.

Interview of Daniel E. Harmeling, Edited by Pierce Butler, September 5, 2011. Samuel Proctor Oral History Program at the University of Florida. Living With the Past, William D. Kenneth, May 11, 2009. http://williamdkenneth.blogspot.com. Accessed 4/23/16.