The Woburn Public Library was established in 1856, but was consecrated on Pleasant Street in Woburn, Massachusetts in 1879. This building is of particular interest because of its architect, Henry Hobson Richardson, who designed many other prominent features across the United States of America. The Woburn Public Library is a communal landmark that still stands strong today and unites the Woburn community under education and recreation. It's a focal point of the town, situated along with the city's major courthouse, bank and post office. The Woburn Public Library attracts many members of the community that are not only interested in educational resources but, also, fantastic architecture.

This photo is featured on the "Library History" page at http://woburnpubliclibrary.org/about/library-history/. This photo shows the front entry to the library as well as the tower extending out from the front of the building. 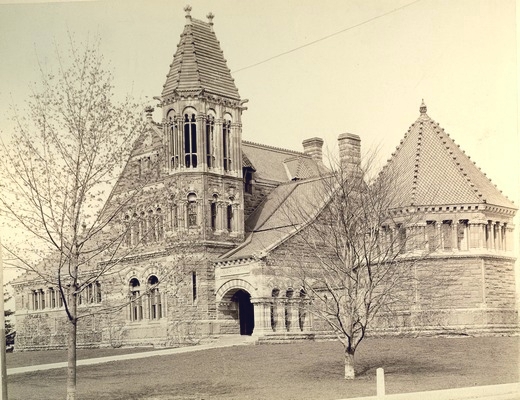 This photo can be found in the "Library History" page at http://woburnpubliclibrary.org/about/library-history/. This photo shows the Romanesque arches inside the main reading room that H.H. Richardson designed. 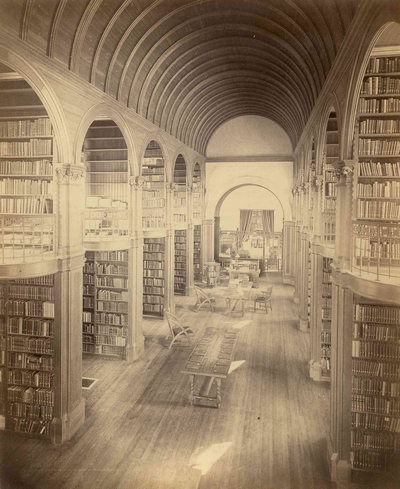 The Woburn Public Library is a definitive feature of this Boston suburb that was constructed in 1879. Its architecture is the stunning work of Henry Hobson Richardson. Richardson's other notable work include the Trinity Church in Boston, Massachusetts, the State Asylum for the Insane in Buffalo, Sever and Austin halls at Harvard University, and many small town libraries outside of Boston.1 Richardson studied in Paris and brought his Romanesque style back to the United States in 1865.2
Henry Hobson Richardson's plans for the Woburn Public were accepted in 1877, just years after he moved to Boston. 3 The library features a strong foundation and a 78 foot tall tower at the front.4  Consistent with the Romanesque style of architecture, there is an entry-way arch at the front of the library and series of arches within the main reading room.5 The building's decorations feature geometric shapes like squares and chevrons, similarly consistent with Romanesque architecture.6 This building is unlike any other in the town; it's very unique and is significantly older than most other buildings in the town. The library is situated in the town center, and is a focal point of the city.
The Woburn Public Library has plans to expand with help of a "$9.9 million construction grant from the Massachusetts Board of Library Commissioners."7 Although the designers are still in the development process, plan to add on a large expansion to the back of the library while also renovation the original structure.8 The initial announcement of the expansion plan wasn't received well by the entire community. Many feared that the authenticity of the building would be jeopardized by the expansion. However, since the announcement community members in favor of the expansion have donated almost $4 million dollars in hopes of having a new center for educational and recreational community usage.9
This library is a landmark in this Greater Boston Suburb. Being one of the oldest standing buildings in the town, it is a significant piece of the town's history. Woburn has been significantly industrializing for many years, and not much is left of the town's original infrastructure. This beautiful piece of architecture transports Woburn's citizens back to the town's beginnings as an old-time tannery town.