Like many American cities during the 1960s, Omaha experienced a series of racial disturbances that led to protest and occasional violence against property. These periodic racial eruptions were rooted in the historical inequalities black people faced in Omaha, and a new spirit of rebellion that reflected both the progress and failures of the civil rights movement. What makes Omaha notable is that there were at least four significant race "riots" during the mid- and late-sixties, perhaps more than any other American city. The riots were centered around North 24th Streets from Clark to Lake Street. The 1969 riot in response to the police killing of Vivian Strong at the Logan Fontenelle Housing Project exposed living conditions. In 1991, African American litigants won a series of court cases that led the U.S. Department of Housing and Urban Development to replace this project with better housing for residents. The Logan Fontenelle project was built as a public works project in the Great Depression and had grown to house thousands in a relatively small part of the city around Paul Street stretching from 20th Street to 24th Street.

During 1960s race riots, many vacant buildings in the Near North Omaha neighborhood were burned to the ground in protest using a variety of firebombs. 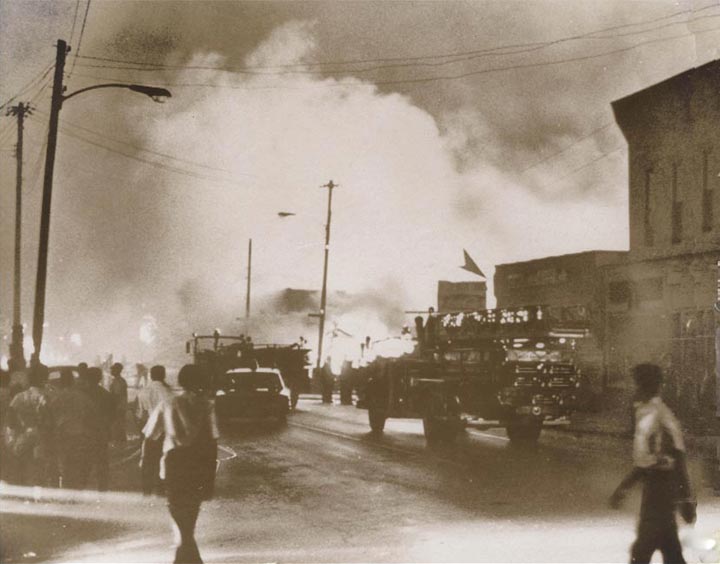 Riot Police were sent in to respond to the riot that ensued following the murder of Vivian Strong and the acquittal of her killer, Officer James Loder. 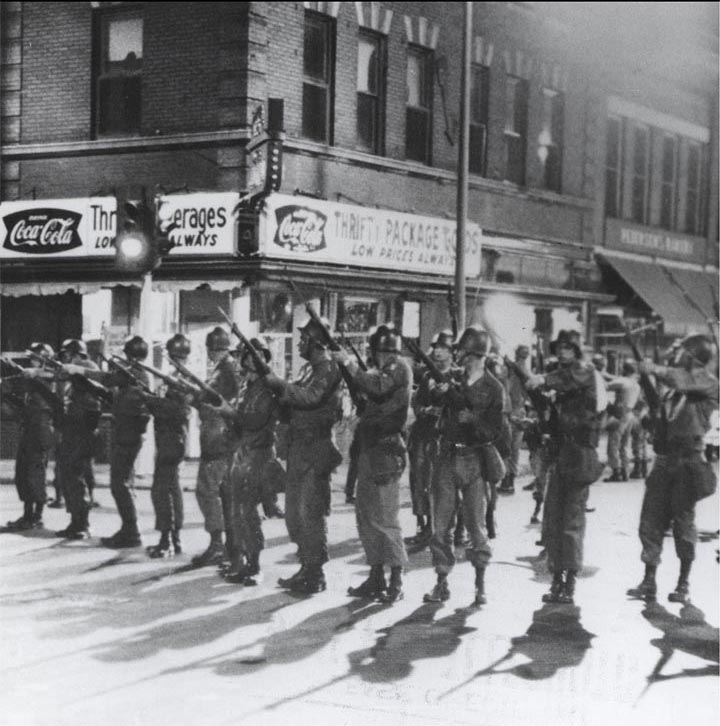 In this photo, black youth who were involved in the the 1 August, 1966 riot are being arrested and taken into custody. 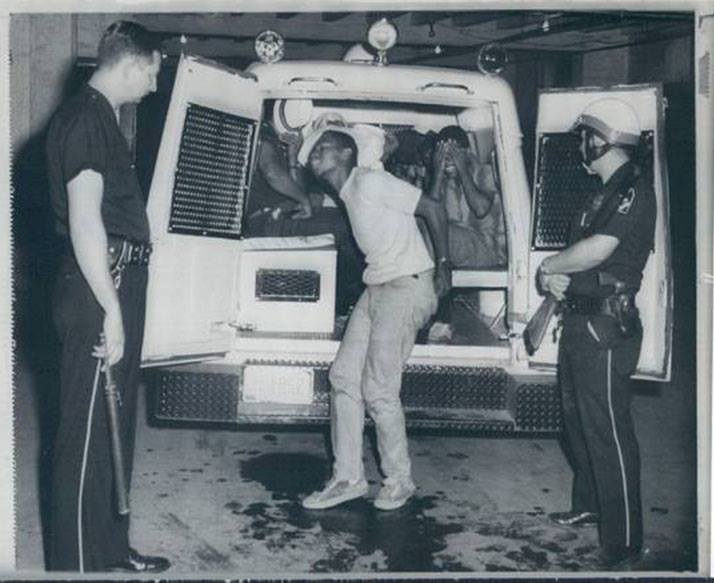 Vivian Strong was the 14 year old girl who was shot and killed by Officer Loder whilst running from the police presence. 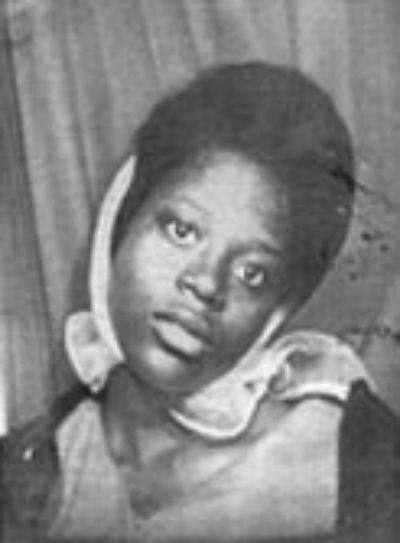 The Omaha Star was one of the buildings in the vicinity that was under the guard and protection of the Black Panthers during the 1 August, 1966 riot. 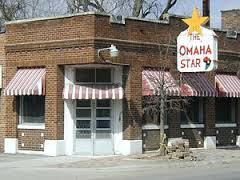 James Loder was the white police officer who shot and killed Vivian Strong without announcing his presence on the scene. The acquittal of Officer Loder sparked the three-day riot on 24 June, 1969. 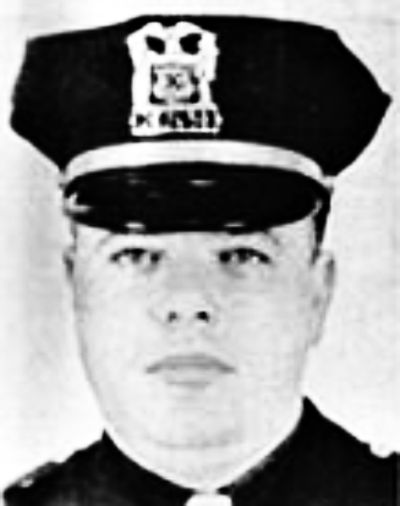 Peaceful protests were often overshadowed by the 'riots' that ensued due to the amount of attention that the violence attracted. 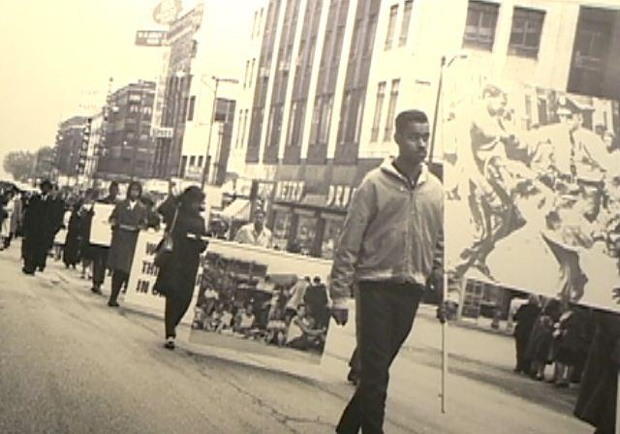 There have always been racial tensions in Omaha, Nebraska ever since the Great Migration, when African Americans moved out of the south and into the northern cities. Having always wanted full equality and freedom without any discrimination, Black people have fought in many ways since slavery. The 1960s is the decade in which the Black Power movement emerged from the popularly named Civil Rights Movement. One of the ways they have been and still are fighting back is in the form of peaceful protests, rebellions, and what many like to call riots. Omaha is one of the most hyper-segregated cities in the country with neighborhoods cut specifically for the different racial and ethnic groups. North Omaha is the neighborhood where the majority of Black minorities reside. In Omaha’s Near North neighborhood, specifically along North 24th Street, four riots took place during the 1960s in response to police brutality.

On 4 July, 1966, along North 24th and Lake Streets, residents from the neighborhood were outside celebrating the holiday in the blazing heat. Come evening, a couple of police cruisers pulled up with officers yielding batons, threatening the Black community with incarceration and violence. The crowd, in response to the officers’ threats, vandalized the police cruisers. With rages running rampant, Molotov cocktails were thrown into vacant buildings and storefronts were left broken and destroyed. This riot lasted a total of three days until the local civil rights organizations finalized negotiations with the mayor to provide more funding for their community youth programs.

The second riot of the sixties ensued on 1 August, 1966 along North 24th and Ohio Streets. After partaking in a burglary on 25 June, Eugene Nesbitt was shot and killed by an off-duty white police officer. The day after his burial (31 June), the Near North Omaha neighborhood ran rampant setting firebombs off in buildings throughout the vicinity. Mayor Al Sorensen, along with many news sources, claimed that the Black Panthers were responsible for instigating the riot. When in reality, the Black Panthers did what they could to protect the neighborhood, standing guard at the Omaha Star and many of the local historic churches in an effort to halt any vandalism.

On 4 March, 1968, many high school and collegiate students from Omaha’s Black community were out protesting the presidential campaign of George Wallace- a southern white segregationist from Alabama. Shortly after the protest commenced, counter-protesters began rebutting using violence. When police officers intervened, the violence only increased, allowing for dozens to be injured on both sides. Many made an effort to flee the scene, including one young Black person who was shot and killed. In response to the whole incident, many rioters continued on in the surrounding neighborhoods causing thousands of dollars’ worth of damage to cars and businesses. Local barber and known leader Ernie Chambers stepped in to rally the youth and calm them before the riot ensued any further.

What is said to be the most notable riot of the sixties began on 24 June, 1969. Vivian Strong had been with friends in an unoccupied building in the Logan Fontenelle Housing Projects. When police officers James Loder (white) and Jimmy Smith (Black) responded to the call of a break-in, many of the youth fled. Without announcing his presence to any of the youth fleeing out the back, Officer Loder shot Vivian at the base of her skull, killing her instantly.

By midnight on the evening of Loder’s acquittal, a riot ensued along North 24th Street starting with the vandalism of two Jewish-owned businesses. By the following evening, an entire ten-block radius was engulfed in flames while more than two dozen bystanders were hospitalized due to crowd attacks. The riot lasted a total of three days resulting in 21 arrests, 88 hospitalized and close to a million dollars’ worth of damage in a 55 by 24 block radius. In response to what had occurred, the city bulldozed the remnants of the riot and left them empty.

Part of the Near North Omaha neighborhood remains in shambles today as parts of the neighborhood were never rebuilt. The white community blamed many civil rights organizations for the ‘riots,’ and did not want to finance the replacement of buildings that the Black community so easily and ‘carelessly’ burned to the ground in the sixties. Although many in the Black community took part in these 'riots,' there were also often peaceful protests as well. While some people hoped to remain nonviolent as some civil rights groups had done, the violence drew more media attention to what had happened.