Constructed in the midst of the Great Depression of the 1930s, this campus building is home to the oldest college at the University of Nebraska at Omaha, the College of Arts and Sciences. This college and building houses the departments of History, Geography, Anthropology, Chemistry, Biotechnology, Latino/Latin American Studies, Native American Studies, Physics, Philosophy, Religious Studies, Women's Studies, and more.

Arts and Science Hall is the oldest campus building at UNO. 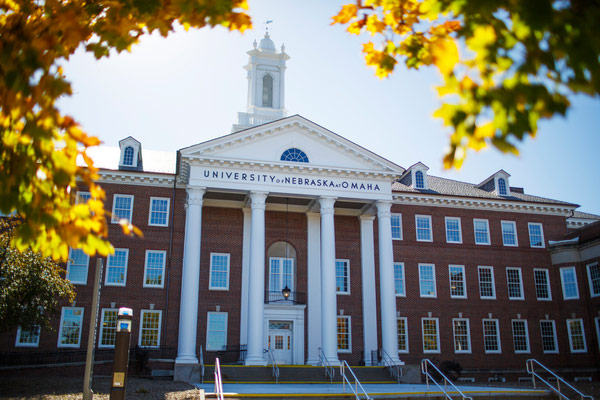 The University dates back to 1908, when the University of Omaha was established as a private college by the Presbyterian Theological Seminary of Omaha. The school became a municipal college in 1930, the same year that this building was erected.

Arts and Science Hall is home to one of the first African American Studies departments in the United States. The Black Studies Department at the University of Nebraska was founded in 1969 out of the crucible of protest and politics during the Black Power era.

The founding of the University of Nebraska Black studies department all started when, on November 10th, 1969 50 years after the infamous race riot of 1919 in Omaha, and 1 year after the assassination of Dr. King, 54 Black students had a sit-in in the office of the then president Kirk Naylor. This was after a joint press conference between the BLAC (Black Liberators for Action on Campus) and Naylor where he responded to the BLAC’s demands. Some of the demands that were made included the firing of two student center faculty members, student control of the student center, and a Black studies program. After Naylor dodge the questions the BLAC asked the press to leave and the sit-in began. The sit-in was meant to address how Black people had little to no voice at the University and hoped to induce change. Other students weren’t happy with how Naylor handled the sit in by calling the police and having all 54 of the students arrested and a seventh demand that they all be released was added to the list the next day. The sit-in seemed to be a failure until the media began to cover the issue, the media dubbed the sit-in participants the “Omaha 54” and once the media began covering the issue the group began to gain community support.

Following the sit-in progressive action was taking place in the form of student-faculty committees, studies, and proposals for the Black studies department. The student and faculty senates came out in favor of the idea of a Black studies department, support on the campus was also widespread. A key supporter, the dean of the College of Arts and Sciences, Vic Blackwell, came forward and initiated the Black Studies Action Committee which would ultimately approve the creation of the department.

While the department was mainly a paper creation at first, in 1970 Melvin and Margaret Wade were recruited from the University of California from Saint Barbara’s Black Studies Department to help transition the department into reality. Melvin said that he and his wife interviewed around 200 students faculty and staff to gauge where the interest for what the department should look like was. The Black Studies Program at UNO was one of the first of its kind and is still going today with options of both a major and a minor. The department has seen it’s challenges since it was created in the form of potential budget cuts but it has overcome them each time and has been operating continuously for over 45 years.

One of its premier annual events, the Black Studies Department at UNO also hosts a Malcolm X Festival that includes plays, music, academic presentations, and informational discussions about African American experience in the U.S. and across the diaspora. “This is opportunity to share our history of culture, and our experience with those not of the African diaspora,” said Dr. Sharif Liwaru president of the Malcolm X Foundation in Omaha. Many of the presentations done at the festival are done by instructors in the department. Most of the presentations are focused towards Black lives matter movements but there are open dialogues about what it is like to be a minority in america. “The attendees must come in with an intention to learn, and they must also have a goal mindset,” Liwaru said. This is a very unique event where anyone can go and expand their understanding of race and race relations in america.