Omaha's DePorres Club, one of the leading civil rights organization in Omaha, maintained an office and headquarters at this location from 1948 to 1950. The organization had two other headquarters and served the community from the late-1940s through to the early-1960s. This Catholic-centered, integrationist organization was created by a group of young people from Creighton University and the nearby North Omaha community as a vehicle to challenge racial discrimination in the city. Over the years, the DePorre's Club led a series of non-violent campaigns and protests against employment and housing discrimination, as well as educational inequality. Notably, the group led a successful protest campaign against the local bus company in the early 1950s, before the more famous Montgomery Bus Boycott. Fr. John Markoe and Denny Holland were key leaders in the group.

Here is a photo of members outside the DePorres center on 24th and Grace Street. This was the second location the DePorres club met at, they left later due to inability to pay rent and moved to another location. 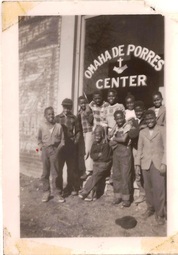 This picture taken in 1951 shows the current members of the Deporres club at the time. This photo was brought to you courtesy of Creighton University Library. 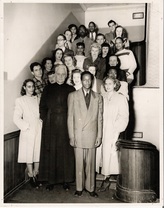 This photo is from The Great Plains Black History Museum collection. The museum's founder, Bertha Calloway, is a former member of the Deporres club. This is an announcement from the club asking for support of their campaign to allow black drivers. 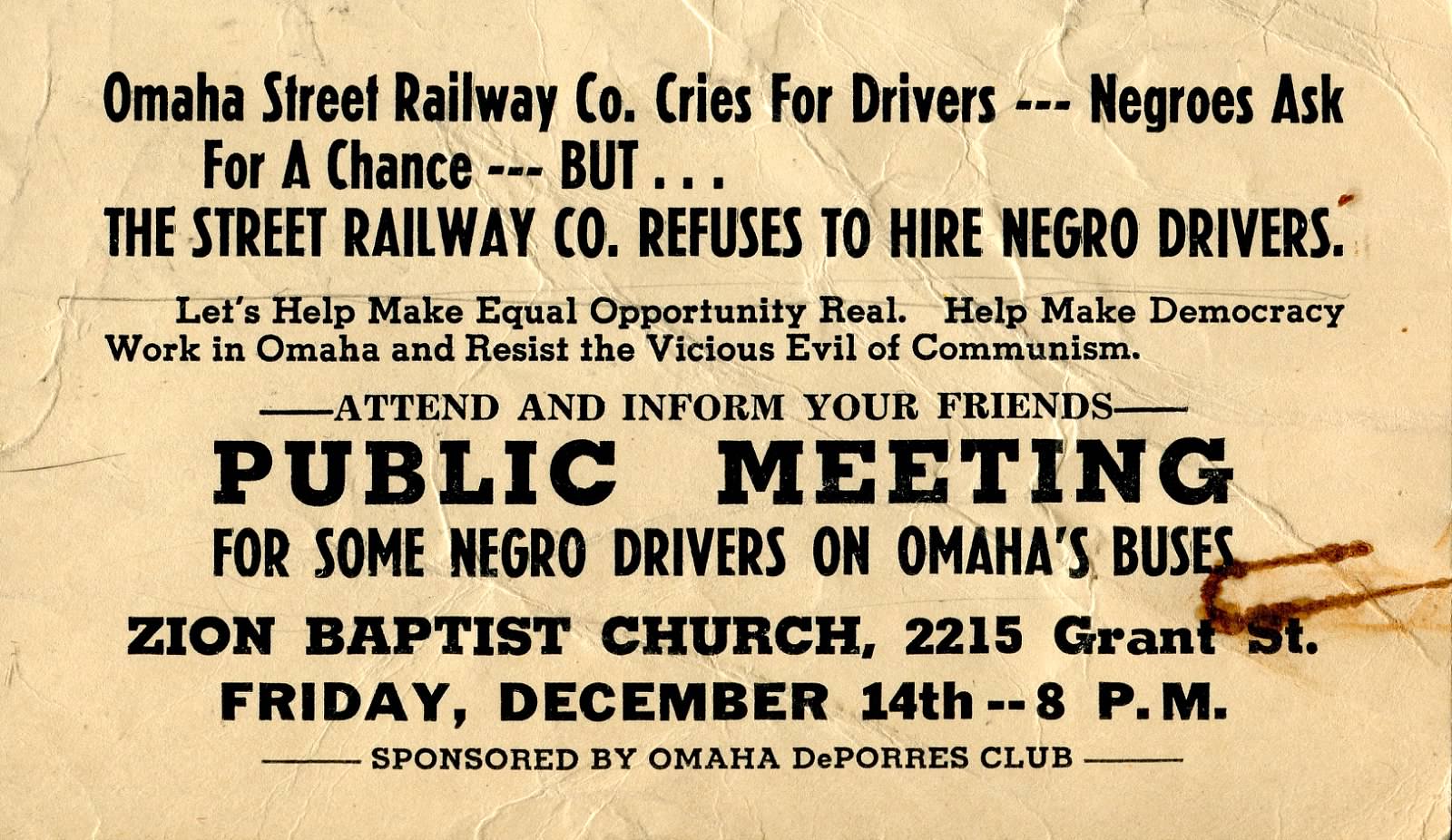 Another photo from The Great Plains Black History Museum collection. This is the pledge all members take before becoming members of the Deporres club. 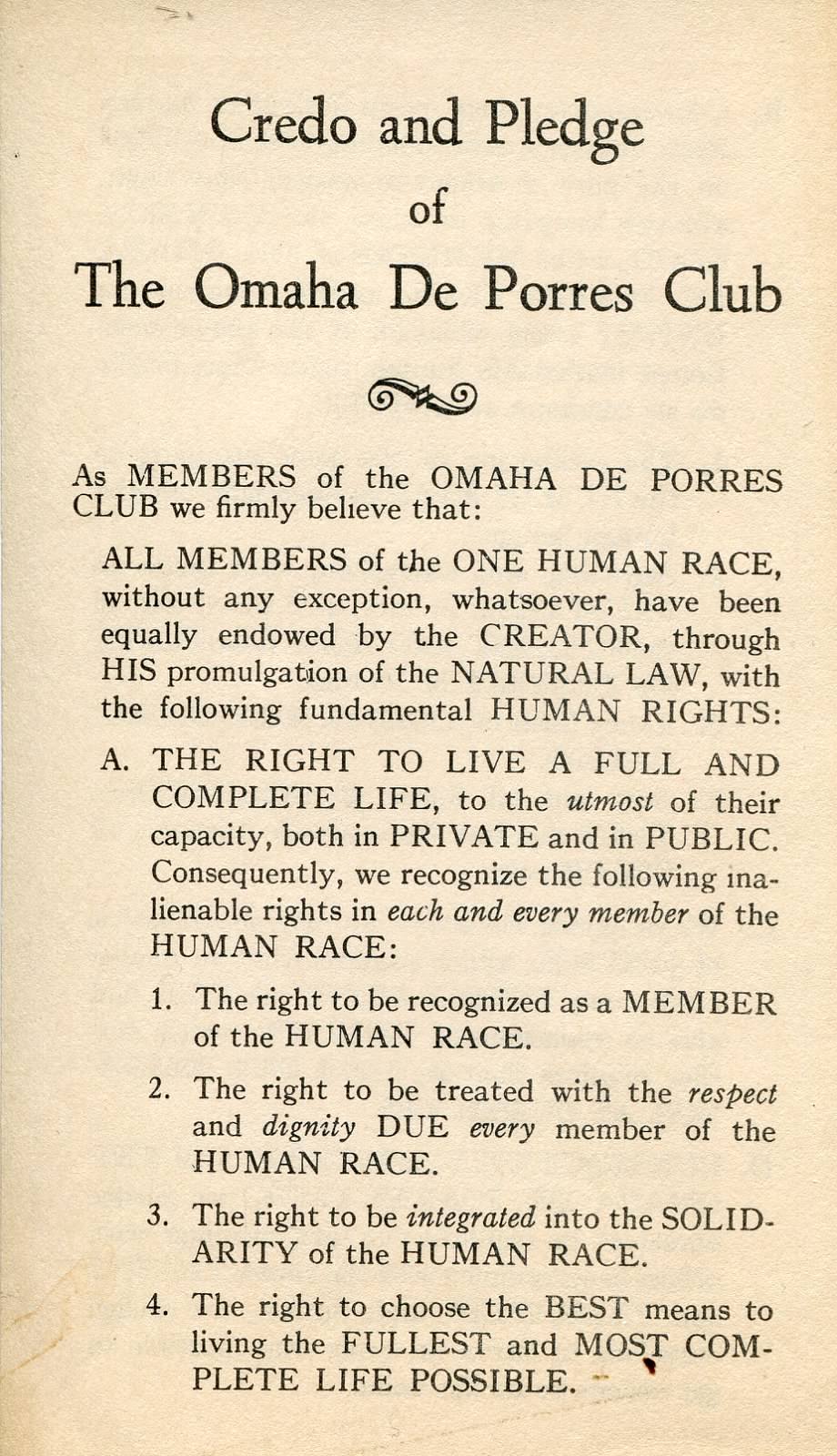 The Omaha DePorres Club was founded in November of 1947 and had carried out their first year of meetings on the Creighton University campus. Founding participants of the club mainly consisted of Creighton students and black Catholics of Saint Benedict’s Church. Beginning actions of the Omaha DePorres Club included going to churches nearby to question why blacks were not welcome to attend school there. This resulted in many allowing black students, however, it also caused Fr. William McCabe, the president of Creighton, to ask the club to find a new meeting place.

From October 1948 to September of 1950 meetings were held at the new “Omaha DePorres Center” which was built out of a storefront for sale on 24th and Grace. Here, the club held weekly forums about racism, held dances, and created youth groups for Omaha children. The Omaha DePorre’s members also took a stand here against local businesses who refused to hire black employees. They took a particular interest in the Omaha and Council Bluffs Street Railway Company. In the summer of 1949 they gathered a whopping 2432 signatures on a petition this marks the beginning of a five year campaign for the Omaha DePorres Club. Along with the railway company the club worked specifically in July of 1950 to boycott Edholm-Sherman Laundry until it would hire blacks who were barred from working the front office or drive delivery trucks. This boycott was an overall success resulting in blacks being hired to work for the laundry company. Due to the club's inability to keep up with the $40 monthly rent in September of 1950 the Omaha DePorres Club would once again have to find a new place to meet.

In October of 1950 the club got word that Mildred Brown, publisher of Omaha’s black newspaper the Omaha Star, offered to let the club meet in her offices for free. This would remain the club’s home for the next four years while they continued their campaigns against both the Omaha and Council Bluffs  Street Railway Company and Edholm-Sherman Laundry. Along with these ongoing campaigns they also worked to boycott Omaha’s Coca-Cola Bottling Company and Reed’s Ice Cream for their hiring practices which ended up being successful boycotts. These campaigns and movements were very important especially during a time when racially motivated crimes and injustices were frequently, if not nearly always, gotten away with. This marks a period where African Americans realize they have power economically through staging protests and boycotts in order to force the city to negotiate towards their demands.

In 1954 due to pressure from the Omaha DePorres Club, the Omaha NAACP, and the Omaha Urban League, the Omaha and Council Bluffs Street Railway Company finally caved to the pressure and began allowing black drivers for the Omaha bus system. This win marked the beginning of a five year break of the Omaha DePorres Club. In 1959 Wilbur Phillips, a club member since the 1950s, brought the club back in order to fight the racially discriminatory hiring practices of Omaha Public Schools. During this year long campaign Phillips led the club to protest and take action against the system. After a year without progress the club decided to disband once again and has now become a part of history.