The Green Bank Observatory, nestled within the community of Green Bank in Pocahontas County, West Virginia, is home to the Green Bank Telescope, the largest fully steerable telescope in the world. Green Bank Observatory houses a significantly distinct center of science that offers a fun, yet educational experience. This museum is dedicated to sharing the history of the observatory, the science behind its mission, and the wonders of the cosmos. Visitors to the museum can also learn about the history of the region from local residents who provide tours and information.

The Robert C. Byrd Green Bank Telescope is nestled in the mountains of West Virginia 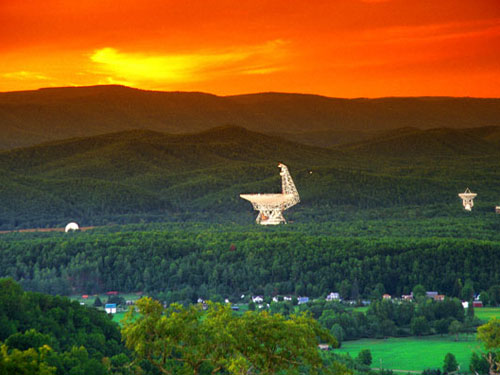 The museum offers exhibits, science demonstrations, and a short film about the history of the Green Bank Observatory.

The National Radio Astronomy Observatory was founded in Green Bank in 1956 as the United States’ first national science facility. The location of Green Bank was chosen due to its natural boundary of mountains and its isolation from highly populated towns and cities. It is located near the center of the National Radio Quiet Zone, a 13,000 square mile area in which radio frequencies are limited to facilitate scientific research. The headquarters of the National Radio Astronomy Observatory moved from Green Bank to the University of Virginia in the mid-1960’s, but the Green Bank Observatory remained a crucial center for scientific research, education and public outreach programs, and as a facility to train future scientists and educators.

The Robert C. Byrd Green Bank Telescope (GBT), is a replacement for a previous 300 ft. radio telescope at the observatory that collapsed in 1988. Senator Byrd campaigned for funding for the replacement in Congress and, thanks to his work, the Green Bank Telescope was dedicated in 2000. The telescope is taller than the Statue of Liberty and its diameter is equal to almost three U.S. football fields. Because of its sheer size, locals of Green Bank commonly refer to the telescope as the Great Big Thing. Due to its sensitivity to radio frequencies, the town of Green Bank is strictly enforced to ensure limited interferences occur. Cell phones, Wi-Fi, and even microwaves are regulated throughout the town.

In August of 2012 the National Science Foundation (NSF), the premier source of funding for the GBT, released a report suggesting to defund the Green Bank Telescope over the course of five years in order to build three new telescopes in Chile. Protests to the report rang out throughout Green Bank, Pocahontas County, and West Virginia. The observatory in Green Bank is one of the largest employers in the county, and the telescope has provided many scientific breakthroughs over the years. Thanks to support from the community and work from state politicians, the Green Bank Observatory continues to operate with federal support.

In July 2019, the National Science Foundation announced its most recent Record of Decision, stating, in regards to the Green Bank Observatory, "After careful consideration of a variety of important factors (...) NSF now issues this Record of Decision (ROD) selecting Alternative A: Collaboration with interested parties for continued science- and education-focused operations with reduced NSF funding (Agency-Preferred Alternative) for implementation ... " According to U.S. Sen. Joe Manchin, D-W.Va., the Green Bank Observatory will remain open for the foreseeable future as a result of provisions he helped to include in the National Science Foundation's 2018 spending bill.