Statesville Correctional Center dates back to 1925, when the state of Illinois constructed the prison with the support of prison reformer Jeremy Bentham. Today, it is a maximum security state prison for men in Crest Hill, IL and is operated by the Illinois Department of Corrections. 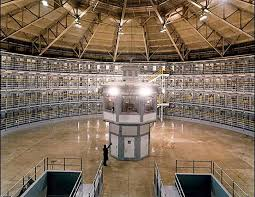 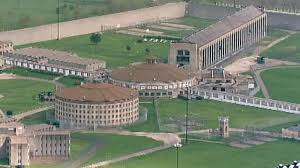 Statesville Prison opened in March of 1925 and was built to accommodate 1,506 inmates.  The prison's design was influenced by the work of British philosopher and prison reformer Jeremy Bentham, the originator of the panopticon concept of prison design. Statesville's F- house cells follow a roundhouse design that features the panopticon layout with an armed tower in the center. This design offers a mixture of sunlight as well as outdoor spaces surrounded by a several tiers of cells. The original F- house remained in use until the 1990s.

Today, the prison holds male inmates and the design continues to serve part of the state's objectives of encouraging and promoting a climate of safe and secure conditions In which offenders and staff can help work towards rehabilitation and reintegration. The maximum security facility has a 32-bed infirmary and protective custody and temporary writ inmates.

The Statesville Correctional Center is one of three Illinois prisons that performed executions via electrocution. (The others were Menard Correctional Center and Cook County Jail in Chicago). Between 1928 & 1962, the electric chair was used 13 times at Statesville. The state ended the use of the death penalty in 2012 when governor Pat Quinn signed a new law.