The Will Rogers Theatre

Located just off the Charleston Square on Monroe Avenue, The Will Rogers Theater opened on February 8th, 1938 and operated until its closure in 2010. During its years of operation, this historic Art Deco theater included seating for a thousand patrons within its single auditorium. As the theater attempted to complete with newer multi-plex movie theaters, the owners decided to divided the building into two auditoriums in the 1980’s. Owing to changing consumer tastes and the growth of modern multiplex theaters, the Will Rogers closed in 2010. In 2011, the Will Rogers Theater was placed on the top ten most endangered historic places in Illinois. Since that time, there have been many interested parties that have looked at the feasibility of restoring and re-opening the historic theater. In 2012, for example, a new owner began but was unable to complete the restoration of the building with hopes of re-opening the historic landmark theater. In recent years, there have been numerous local events to raise awareness as well as a website and Facebook page that connect interested parties with the fundraising campaign to restore the historic Will Rogers Theater. 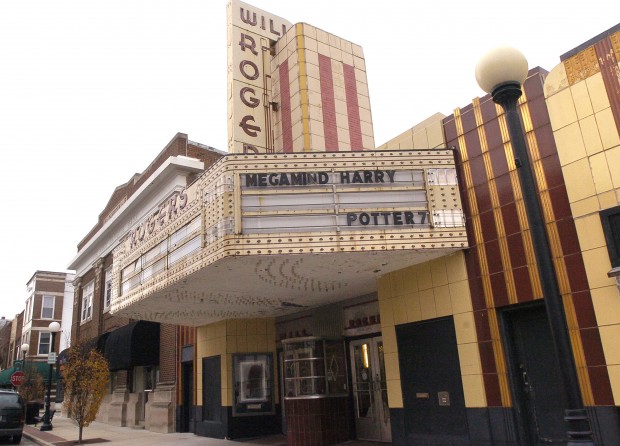 Located just off the Charleston Square on Monroe Avenue in Charleston, Illinois, The Will Rogers Theater was originally opened on February 8th, 1938.  The theater contained 1,000 seats in its single auditorium and was created in Art Deco style. The theater was divided into two auditoriums in the 1980’s, and was subsequently closed in 2010.  There have been many interested parties over the years that have looked at re-opening the theater, with a new owner taking over in 2012 looking to restore the building and re-open the historic landmark. As of 2016, numerous local events, an online website to donate, and a Facebook page have been created to help with the restoration funding.  In 2011, the Will Rogers Theater was placed on the top ten most endangered historic places in Illinois.