The Battle of Plymouth was the last major victory for the Confederacy during the Civil War. On April 17, 1864, 13,000 Confederate troops led by General Robert Hoke attacked four Union forts situated along the Roanoke River in Plymouth. They were garrison by 2,500 troops led by Colonel Henry W. Wessells. These troops were also supported by the Union navy, which had a port downstream in the Albemarle Sound. The Union forces managed to repel Confederate troops during the first couple of days thanks to their well-entrenched positions and bombardment from the Union ships. Then on the 19th, the ironclad CSS Albemarle arrived on the scene and proceeded to sink the USS Southfield and Miami and keep other Union vessels away. This allowed the Confederate troops to relatively easily to overrun the Union forts, forcing all of the troops to surrender.

Map of the battle lines 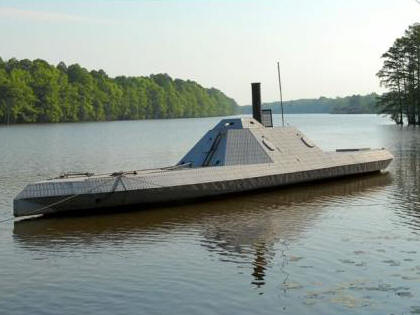 Plymouth was a strategically important location. It was not far upstream from the Albemarle Sound and the Atlantic Ocean and therefore easily accessed for shipping goods and troops. IT was also situated in the northern part of the state and in a sort of 'backdoor' to the Confederate capitol in Richmond, Virginia. After Union captured it in 1862, they were able to make inroads into the northern part of the state and threaten Richmond. It was also from here the that the Union tried to destroy the Wilmington/Weldon railroad line, which was vital to the Confederacy. For these reasons, recapturing Plymouth was vital for the South.