Peoples of the Coast Historic Marker

Prior to the arrival of Europeans in California, the land which is now occupied by San Francisco had been home to the Yelamu tribe since at least 500 CE. The Yelamu are one of about 50 politically independent tribes which make up the Ohlone (or Costanoan) culture and language group. The Muwekma Ohlone Tribe of the San Francisco Bay Area is an active part of the San Francisco community today.

Peoples of the Coast marker (image from Historic Marker Database) 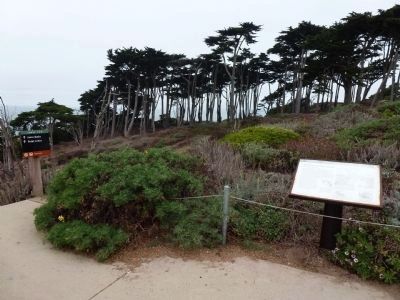 Peoples of the Coast marker (image from Historic Marker Database) 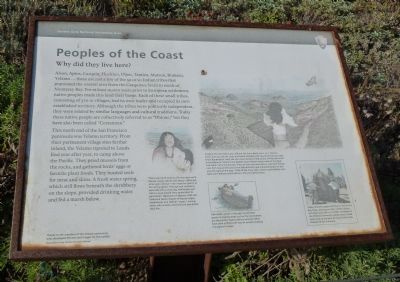 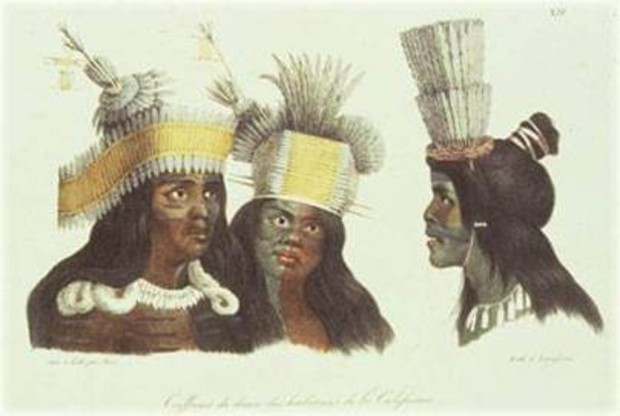 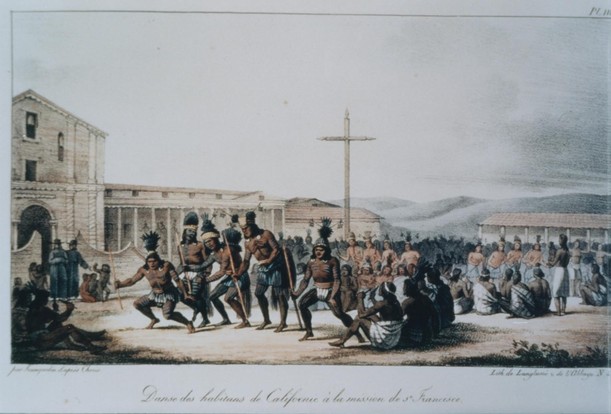 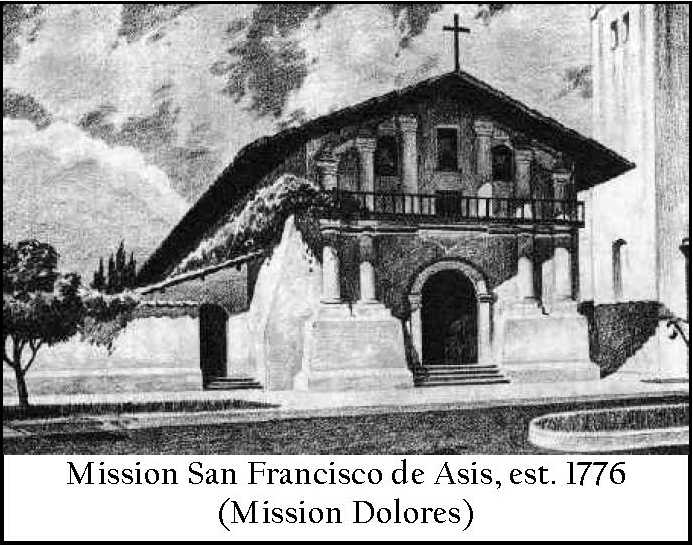 A tuupentak, or dance house/round house (image from the Muwekma Ohlone Tribe of the San Francisco Bay Area) 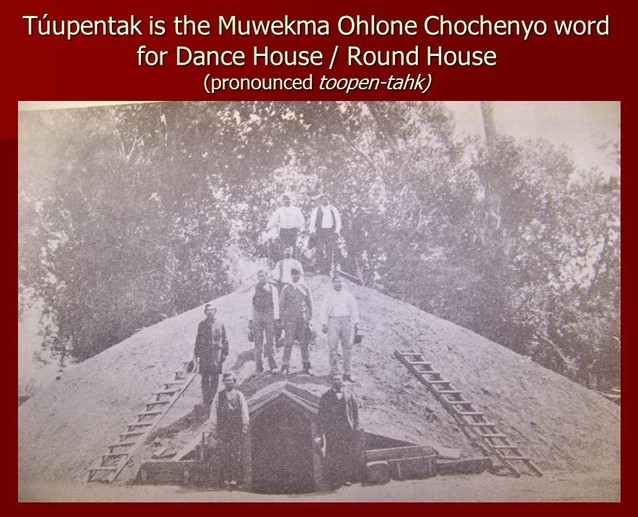 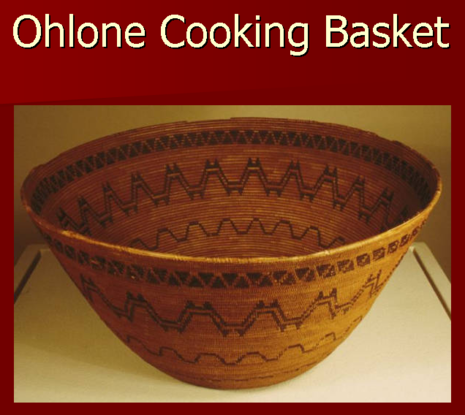 The Ohlone fished, hunted, and gathered, practiced game management, and used controlled burns to increase rather than deplete their resources. Because of this, they are sometimes referred to as quasi-agricultural. About 150 of the 300 native plant species in the Presidio area of San Francisco were utilized by the Ohlone: some for the construction of conical pole-and-reed huts and balsas (canoes), some for tool manufacture or medicine, and others as food sources, including seeds, berries, roots, and particularly Coast Live Oak acorns. The Ohlone diet also included fish, mussels, oysters, and seals from the Bay, as well as rabbits, antelope, reptiles, waterfowl, and insects.

Both men and women fished and participated in rabbit drives, but the majority of the hunting was done by men with chert or obsidian tipped arrows and darts or knives. Weaving was fundamental to the Ohlone, since rope was necessary for fishing nets and basketry traps, and twined basketry was utilized in food processing, cooking, fishing, storage, and the collection of mussels (including abalone). The Ohlone, along with other native Californians, are reputed as having the highest quality and most diverse basketry in the world. Sweat lodges and dance houses (tupenak) were constructed as semi-subterranean ceremonial structures. Ritual clothing included feathers and abalone and Olivella shell ornaments and beaded reed dance skirts and headdresses, as well as the pelts of rabbits, deer, elk, antelope, bears, wildcats, sea otters, and lions. Everyday summer clothing was mainly worn only by women, who wore plant fiber and deerskin skirts. The Ohlone considered their cemeteries sacred; some of these burial grounds included several thousand remains.

In the 1760s, Spain sought to establish colonies in California, fearing they would lose the opportunity to England, the Netherlands, or Russia. Visitor-General José de Gàlvez proposed an expedition to set up Christian missions as a means of implanting European political and economic systems within the region. Each mission contained a presidio (military unit) and functioned as a town. The 1769 expedition was led by Captain Gaspar de Portolá, along with religious leader and Franciscan priest Junípero Serra, and built a mission at Monterey Bay. Another expedition from the Alta (Upper) California mission brought Spanish settlers, led by Juan Augustín Bautista de Anza, to present-day San Francisco in 1775.

Five days before the Declaration of Independence was signed in Philadelphia, Mission San Francisco de Asis (commonly called Mission Dolores) was founded. The Presidio de San Francisco housed a garrison as well as administrative and training facilities, while the Castillo de San Joaquin was an armed fortification overlooking the Golden Gate. Ohlone religion and cultural practices, including their careful management of the land, were restricted or forbidden outright.

"Missionized" Native Americans were the labor force for the new agricultural/pastoral economy of the Spanish colony. Though some willingly joined the new system, many were held captive against their will. The combination of over-crowded (and sometimes abusive) mission conditions, unhealthy diet, and European diseases wreaked havoc on the Ohlone populations. At the same time, the end of native game and land management, the clearing of the land by the Spanish, and the introduction of agriculture and cattle altered the landscape and destroyed the resources and economy of the Ohlone.

Oak trees virtually disappeared and chaparral took over the Presidio. Desertions, conflicts between settlers and Native Americans, and conflicts within the Native American population ensued. In the early 1820s, Pomponio led a guerrilla army of runaway neophytes and neighboring indigenous villages in an attack on Mission Dolores. Spanish soldiers brought in new "converts" from outside the Bay Area.

After Mexico declared independence from Spain in 1821, mission lands were officially secularized and removed from the Catholic Church's control. The Secularization Act was passed in 1833, granting the secularized land to be divided amongst indigenous peoples; however, in reality, only three or four individual Ohlone were given any land, the vast majority working as serfs on the ranches of a new feudal aristocracy of "Californios". After the United States won territories including California in the Mexican-American War (1846-1848), the Spanish Castillo was demolished and tribal lands invaded.

Following the Gold Rush of 1848-1849, California Governor Peter Burnett advocated a policy of extermination of the Ohlone peoples, offering bounties for Indian scalps. In spite of this and subsequent policies aimed at either destruction or assimilation, the Ohlone people and their culture have survived, and the Muwekma Ohlone Tribe of the San Francisco Bay Area is an active part of the San Francisco community today.

Marker Inscription:
Peoples of the Coast - Why did they live here?

Alson, Aptos, Carquin, Huchiun, Oljon, Tamien, Matsun, Rumsen, Yelamu…these are just a few of the 50 or so Indian tribes that populated the coastal area from Carquinez Strait to the south of Monterey Bay. For at least 10,000 years prior to European settlement, native peoples made this land their home. Each of these small tribes, consisting of 3 to 10 villages, had its own leader and occupied its own established territory. Although the tribes were politically independent, they were related by similar languages and cultural traditions. Today these native people are collectively referred to as “Ohlone.” But they have also been called “Costanoan.”

This north end of the San Francisco peninsula was Yelamu territory. From their permanent village sites farther inland, the Yelamu traveled to Lands End year after year, to camp above the Pacific. They pried mussels from the rocks, and gathered birds’ eggs or favorite plant foods. They hunted seals for meat and skins. A fresh water spring, which still flows beneath the shrubbery on the slope, provided drinking water and fed a marsh below.

There was much more to life than just work. Games, songs, stories and dance – although some were serious – also made for plenty of fun and laughter. Through oral traditions, especially story and song, mythology, and history were passed from generation to generation. Necklaces of abalone shell and elaborate dance regalia of feather capes, headdresses, and feather “ropes,” among other adornments, enriched and beautified daily life.

Imagine the cove below you without the Sutro Baths ruins, as in Yelamu times. Can you see the rocks and beach crowded with sea lions? Can you hear those hundreds of noisy sea lion voices being carried up the cliff by the wind? In the distance, Yelamu men paddle canoe-shaped boats made of bundled tule reeds. From these boats, they can hunt sea mammals or cast their fishing nets. Rich natural resources from land and sea have attracted people to this area throughout the ages. Think of the many men, women, and children who have come before us and stood in this very special place.

Tule reeds, which in the past would have grown in marshy areas such as the cove below, are the perfect boat building material. Why? Each stem is filled with tiny air pockets, making it buoyant in water.

Thanks to the members of the Ohlone community who developed the text and images for this exhibit.Illustrations – Linda Yamane (Rumsien Ohlone)

Today, Ohlone people continue to live in the Bay Area, carrying on their native culture, and sharing it with us. In 2001, members of the Ohlone community constructed a small tule house in the park at Crissy Field in the Presidio of San Francisco.