Throughout the 1968-1969 academic year, African American students had protested conditions at Cornell University. Citing the university's failure to address years of complaints regarding racism on campus and a curriculum that excluded African and African American experiences and perspective, the student protesters moved from petitions to more disruptive demonstrations. Seeing their fellow students face punishment and possible expulsion for expressing their views, some students decided it was time to escalate their protests. Some of the black students disagreed with this approach, citing the university's recent action to fund the creation of an Afro-American Studies Center in April. On the morning of April 19, 1969, the appearance of burning crosses outside a building used by black students helped to compel many of the students to action. As Cornell's Parents Weekend celebration began, about eighty members of the campus's Afro-American society, some of them armed, ejected parents and university officials and occupied Willard Straight Hall on April 19, 1969. The situation looked dire when white students from Delta Upsilon fraternity attempted to seize control of the building by force. Images of armed black students expelling parents, clashes between white and black students, and the possibility of violence on a major college campus led to national news coverage and the resignation of the university's President. The protest was resolved peacefully within 36 hours, however, as other university administrators chose to listen to the student's demands and negotiated a settlement that led to better communication and the creation of new policies regarding respect for diversity and new academic courses and programs. 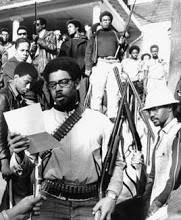 Within weeks of the protest at Cornell, similar protests and occupations of campus buildings occurred at several other leading colleges. 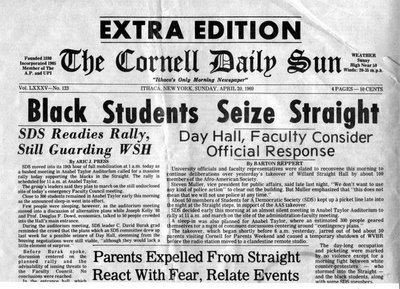 Donald Downs-Cornell '69: Liberalism and the Crisis of the American University. Click the link below for more information about this book. 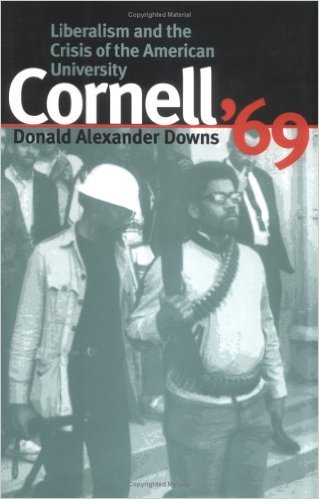 This photo of student Eric Evans and other protesters leaving the building won a Pulitzer Prize. 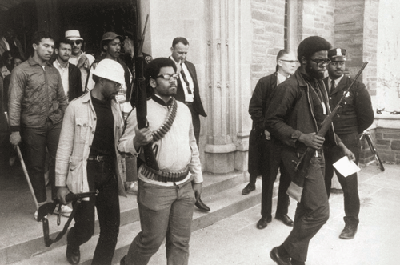 The choice of Straight Hall was both symbolic of the struggle being waged at Cornell and a tactical decision. At this time, some of the wealthiest white parents were staying at Straight Hall, a building whose appearance seemed to represent the proverbial Ivory Tower with its Gothic architecture. The images of black students being surrounded by mostly white administrators and police evoked the historic memory of the defenders of the Alamo, or Native Americans being surrounded at Wounded Knee. This was the first armed occupation of a campus building in American history, a narrative that offered many foreboding examples of similar standoffs leading to tragedy.

Within hours of the occupation, police forces from neighboring cities converged upon the campus and prepared to storm the building. Had this occurred, many today believe that the outcome would have been deadly. "It could have made Kent State and Jackson State look like the teddy bear's picnic," a Cornell police officer reflected years after the protest. "It would have been just absolutely terrible." Instead, university administrators opted for open communication between the students- a strategy that likely saved lives.

The peaceful resolution of the conflict alone did not erase or even reverse racial tensions on campus, but they did provide a lesson regarding the value of maintaining an open dialogue. For the student protesters who threatened but did not commit acts of violence against white faculty members, the protest's peaceful resolution is equally valuable. This entry includes many links to oral histories from participants-including Tom Jones-a student who nearly committed a violent crime in the heat of the protest and went on to become one of Cornell's trustees. As a student, Jones blamed many of the campus's problems on then-president James Perkins. As a leader of Cornell alumni, Jones came to understand many of the measures Perkins had taken throughout the 1960s to increase black enrollment and move the campus towards becoming a more inclusive place. In recognition of a man he once despised, Jones funded the Perkins Prize for Interracial Understanding.

Uris Library Staff. Crisis at Cornell; impressions of events relating to the occupation of the Straight by the Afro-American Society of April 19, 1969. Ithaca, N.Y.: Cornell University Library, 1969.