Completed in 1994, this park has become the highlight of Providence's downtown revival efforts. 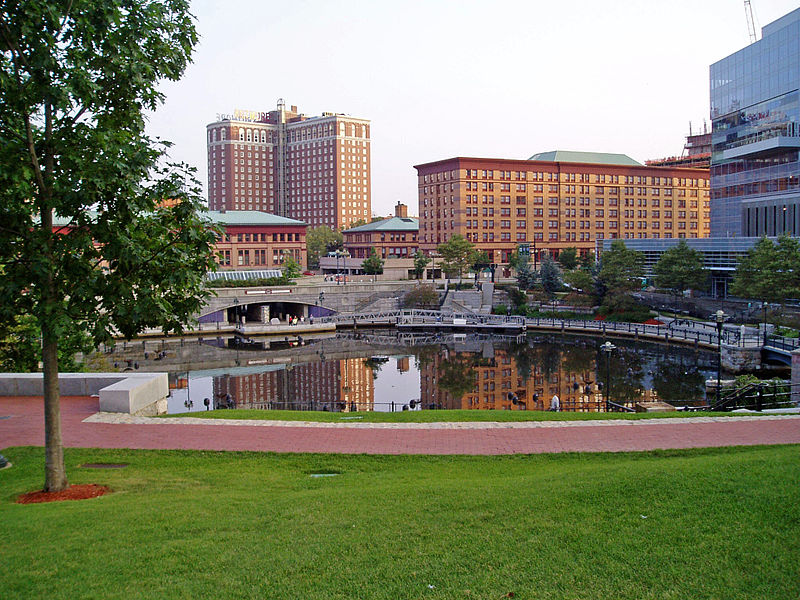 For the past decade, the city has sponsored a series of summer events known as Waterfire. These bonfires move to music and have inspired similar installations in other cities. 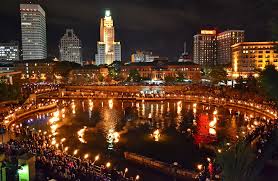 Waterfire in front of the Courthouse

In downtown Providence, Rhode Island, there is a four-acre park surrounding a small tidal basin.  The park features landscaped walkways around the water, historical markers, and foot bridges which connect the city’s neighborhoods to the park, an amphitheater, various art installations, and the popular “Waterfire” display.  Planning for Waterplace Park began as far back as the Carter administration (1977-1981) when city officials were trying to come up with a design to move the railroad tracks and make more commercial space.  The legislature created a special district and established the Capital Center Commission, a distinct governmental entity responsible for developing the area.  The commission worked with a consultant (Skidmore, Owings & Merrill) to decide what to do with the parcels then owned by the city, state, Amtrak, and P&W Railroad. Their vision included a total of 11 acres of urban riverfront parks and 1.5 miles of walkways for the residents’ enjoyment. The planning phase, redevelopment studies and environmental analysis were completed by 1984 and then it took another ten years to complete the project.

Waterfire was first lit in 1994. The art was commissioned for the celebration of the tenth anniversary of First Night Providence, a New Year’s Eve party in the city.  The first installation was aptly named, “First Fire.” The artist was a local sculptor and photographer named Barnaby Evans. Evans created “Second Fire” in June 1996 for the International Sculpture Conference. Waterfire was started by a group of art supporters after Second Fire, so that the art could become an ongoing installation. Many people see the piece as a symbol of the city’s revival, or renaissance. It features more than eighty bonfires in the basin which give off a fragrant smell and illuminate the arched overpasses. Music plays during the Waterfire lightings, adding drama to the atmosphere. The non-profit organization garnered additional support from hundreds of dedicated volunteers, staff, donations from visitors, and contributions from corporate entities, the City of Providence, and the State of Rhode Island. Now, Waterfire is a regular site illuminating downtown Providence.

The park is enhanced with gorgeous landscape architecture, including riverwalks and venetian-style footbridges. The walkways connect the downtown area to the nearby neighborhoods, such as College Hill and the East Side.  Visitors can also be treated to gondola rides and festivals in the park.  During the summer, concerts are performed at the park’s amphitheater.