Site of the second-oldest surviving structure in Harnett, County NC. This building once served as an important stagecoach stop on the only major road in the county.

A view of the Dushee Shaw Half-way House in Harnett County, NC 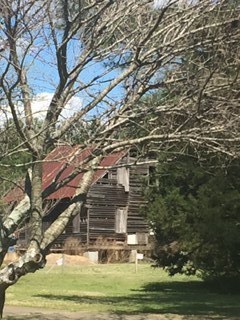 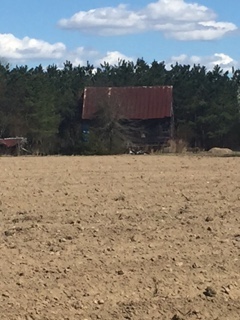 The Dushee Shaw Half-way House was built around 1830 and may be the second-oldest surviving structure in Harnett County, NC (1). Situated in a town called Coats, which was once Averasborough, the house also doubled as a tavern/inn serving stagecoaches on route from Raleigh to Fayetteville. According to tradition, the house was also used as the site of the first Scots Presbyterian services in Eastern Carolina (2). It is also rumored to have housed Marquis de Lafayette of American Revolution fame, although hard evidence of this is lacking.

The original inhabitant, Dushee Shaw, sold the house and 3,000 acre estate to Willis Turlington in 1839; however, Willis never took up residence in the house (3). The structure is located on present-day Route 55, which had been referred to as the Raleigh-Fayetteville Road. Harnett County had few towns before 1850, and this road was the only major transportation route through it. Thus, one may infer that the Dushee Shaw Half-way House played a central role in early Harnett County history. By 1860 the sparsely-settled county had yet to even have a railroad run through it (4). Later, the Durham and Southern Railway would run near the Dushee Shaw House (5). During the Civil War the Dushee Shaw House played a role in the Battle of Averasborough by housing wounded Confederate soldiers (6).

The building has recently become a focus of the Aversasboro Town Restoration Association. It is currently in disrepair and in need of significant restoration leading it to become the subject of local ghost stories. Inside one will find missing floor boards and wall panels leaving the structure exposed. It used to have a porch on its east side. In 2013 new foundational pillars have recently been installed to raise the building. With enough TLC, this building can be restored and used to showcase this little gem within Harnett County history.