The Ackland Art Museum became the first major museum of art in this section of the American South when it opened in 1958. The collection has grown to include over 17,000 works, and the museum offers over a dozen special exhibitions and programs throughout the year. The museum is part of the university's teaching mission, offering internships and paid positions for art students and future teachers, as well as a wealth of programs for community members and area schools. The museum's history is unique, and for many years, was a subject of intrigue given the rivalry between the University of North Carolina-Chapel Hill and neighboring Duke University. In his will, William Hayes Ackland left a bequest to establish a university art museum in the South because there were few museums of any kind below the Mason-Dixon Line. Ackland bequeathed Duke his entire collection and more than a million dollars on the condition that he be buried within the newly-built museum. However, after Ackland died in February 1940, Duke's Board of Trustees met in a secret session in September, 1941. The minutes of that meeting are sealed, but the news that the Trustees had declined the gift due to Ackland's request to be buried on their campus made news throughout the state. “When Duke University, which likes money, wouldn’t have it," remarked Governor Cameron Morris to a the Winston-Salem Journal, "that’s a queer thing." Duke's refusal to accept the gift led to nine years of litigation. Because UNC Chapel Hill had been one of the schools Ackland considered leaving the money to before settling on Duke, it was decided that Ackland's fortune would go to UNC. The Ackland Art Museum opened in 1958 on the campus of UNC-Chapel Hill. In 1980, the minutes of Duke's Board of Governors were released, allowing university historians to finally reveal the decision behind the refusal of Ackland's bequest.

The Ackland Museum of Art opened in Chapel Hill in 1958, 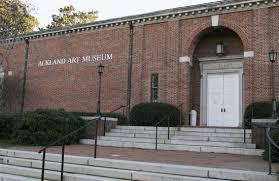 The museum is named after Hayes Ackland (1855-1940), who decided to bequest funds to Duke University to build an art museum. However, in 1941, Duke refused the money owing to Ackland's request to be buried within the museum. 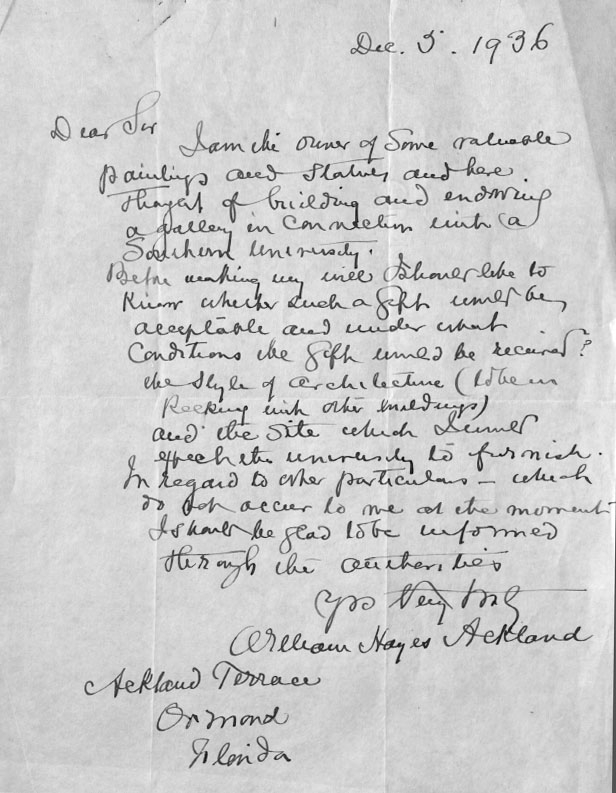 The museum was designed by Eggers and Higgins of New York in the Georgian style and built with red brick. It contains exhibition galleries, an art library, classrooms, studios, and offices. Originally, the museum predominately showcased Western art, dating from ancient times to the present. In the eighties, the collection began expanding to include large amounts of Indian, Chinese, and Japanese pieces.

During the 1930s, interest in the arts in North Carolina began growing exponentially. Due to the New Deal Federal Arts Project, nine arts centers opened in the state around this time. North Carolina passed a law that required all elementary school teachers to take art classes and the Department of Education began bringing visiting artists to UNC every summer. When Francis Speight, considered by many to be North Carolina's most famous artist, returned to teach classes in the summers of 1934 and 1935 he was met with an outpouring of enthusiasm. This response caught the attention of university administration They decided to make arts programs a more significant part of the university.

In 1936, Russell T. Smith began teaching at UNC. He was the university's first full-time art teacher. Smith left in 1940 to work as the head of the School of the Museum of Fine Arts in Boston. Before Smith left, he ensured that John Volney Allcott, who had previously been at Hunter College, would come to lead the department. Allcott held this position for 17 years. He formed an art appreciation group known as the Friends of the Person Hall that were influential enough to bring an impressive number of prestigious works to Chapel Hill. For example, "Victory Boogie Woogie" by Mondrian was exhibited at Person Hall in 1951.

Research now reveals that there were two reasons why Duke's Board of Trustees refused the bequest. The first was Ackland's insistence that the building be operated by his trustees rather than directly by the university. The second was the request for his remains to be placed in the museum. Ackland's bequest was quite specific how this should be handled:

“My trustees shall cause to be erected a memorial building in the form of a gallery or museum, to be known as the ‘William Hayes Ackland Memorial' and in which my trustees shall place and maintain on permanent exhibition all of my tangible personal property and effects reserved for that purpose in accordance with provisions hereinbefore contained, and such other objects of art as may be added thereto as hereinafter provided. As a part of or adjacent to such memorial building, I direct my trustees to have an apse erected, in which my remains shall be permanently interred in a marble sarcophagus beneath a recumbent statue…. I direct that said building or buildings be erected upon the campus of Duke University in Durham, North Carolina, or, if permission therefor cannot be obtained, then upon the campus of the University of North Carolina, Chapel Hill, North Carolina.”

This final request angered many Duke alumni, as the only individuals who had been given the honor of being buried on the campus at that time were members of the Duke family. Duke officially rejected the bequest in 1941, but for many decades, the details of Ackland's will and the reason for the university's refusal were kept secret. In 1958, the Ackland museum opened at UNC, complete with the marble sarcophagus bearing Ackland's remains.