This local military history museum was built from the donations of local collectors and contains a number of rare and one-of-a-kind items, such as training aides that allowed troops to understand how their weapons worked. The museum opened in its current location in 2003 and continues to expand. Given the nature of the museum which is funded and staffed by local volunteers and full of items donated by local veterans, many of the exhibits interpret the history of the United States military through the experience of Letcher County veterans and residents. As a result, the museum and its library contain a number of items of interest to local residents and helps to preserve and interpret the history of Whitesburg and Letcher County itself.

The museum includes a number of historic uniforms, as well as weapons and training devices, equipment, historic photos, and other artifacts. 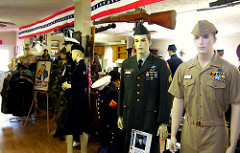 The museum was created thanks to the efforts of local veterans such as Ben "Buster" Taylor who passed away a few years after the museum's creation. Taylor served in the Green Berets and was among the men selected to escort President Kennedy's funeral caisson from the Capitol to Arlington Cemetery. After serving in Korea and Vietnam, Taylor returned to Whitesburg and served as sheriff of Letcher Clounty.

The museum is located near a number of small memorials to local veterans. Static displays include a military Jeep, a M60-A3 tank, and other military vehicles.