Built from 1836 to 1841, this large incline plane crosses over Crooked Creek and cuts through solid limestone. The incline provided rail service to Madison, allowing trains to deliver goods to the Ohio River. As the Ohio River lessened in importance, so did the incline. The incline is no longer used today, but visitors can see the railroad tracks and hike the trails that run parallel to the incline.

The stone arch culvert over Crooked Creek as it appears today. The railroad built this culvert in 1863 after the original culvert washed away in 1844. 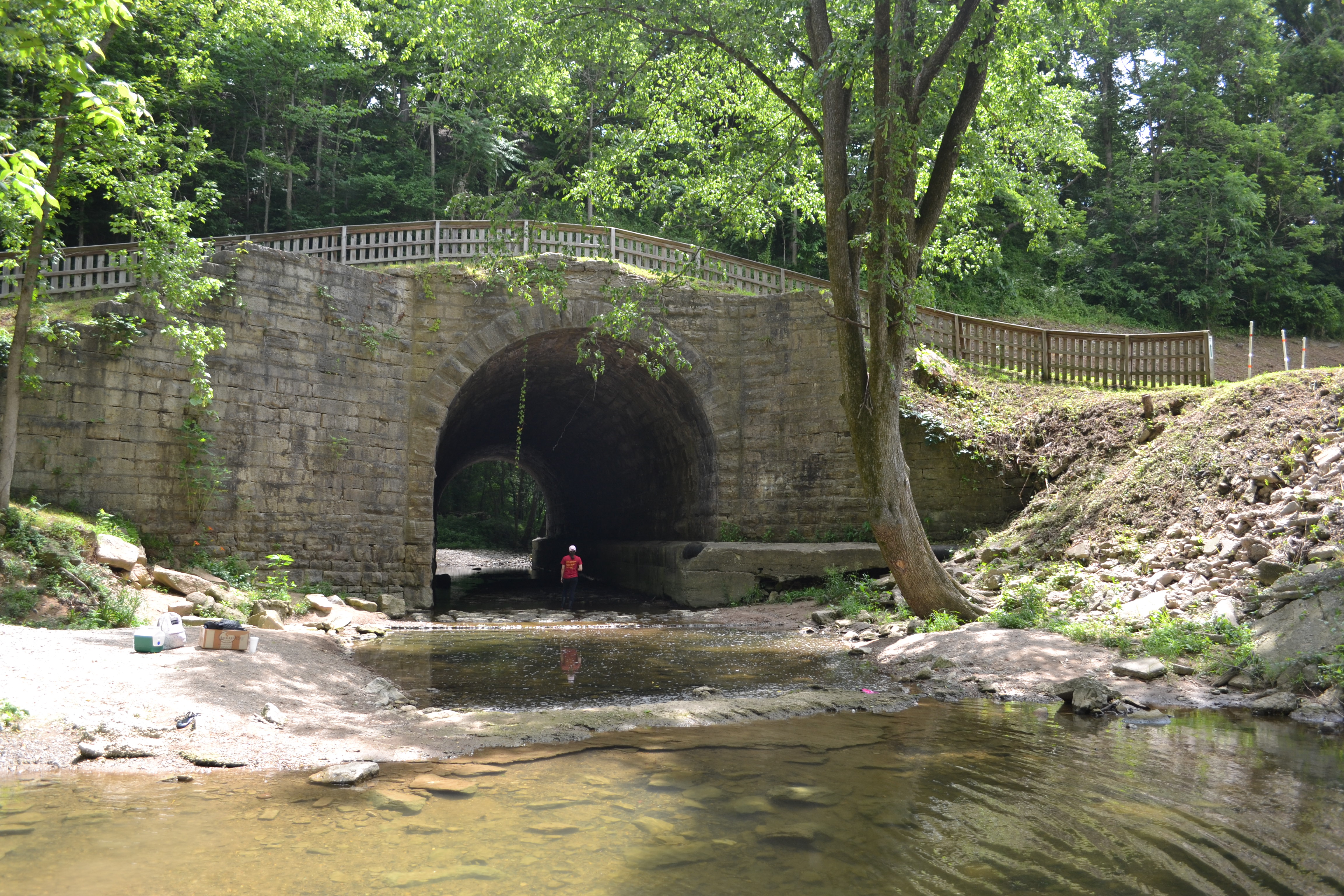 The Madison Incline Plane is the steepest non-cog standard gauge railroad in the United States and dates back to the founding of the Madison and Indianapolis Railroad in 1836.  Madison Indiana is surrounded by a large set of hills. To move freight from the interior of the state to the port at Madison, a large inclined plane was needed to overcome the hills. The plane was built in three sections, starting in 1836 and finishing in 1841.  It is 7,012 ft. long with an elevation of 413 feet, giving it an approximate grade of 5.89%.1

The Madison and Indianapolis Railroad was conceived during the period of internal improvements and chartered in 1832.2  Railroad promoters advertised the new line as the cheapest way to deliver products to the Ohio River.  Proponents saw the railroad as absolutely necessary for the development and growth of Indiana.3  During the early days of railroading in the United States, railroads were used as feeder lines, allowing more goods to reach rivers, which were the major highways of their time.  They were not seen as independent transportation networks. This view made Madison a natural choice for a railroad terminus, as it provided excellent access for the transfer of goods to the Ohio River.4  The promoters were correct, and in the mid 19th century the railroad grew the Madison economy.  Specifically the railroad’s transportation of pork from the interior farmlands to the Ohio River helped Madison become a “porkopolis”.5

Construction began on September 16th 18366 under the direction of Thomas Morris.7 The construction took in two sections.  The biggest cut required one hundred and seventeen feet of excavation through solid rock and has a length of 1,150 feet.8  The railroad awarded contractors William Stough and A. W. Flint the construction contract for the first section of the incline.9  During the excavation process, gunpowder would be used to loosen rock, which would then be carried away in handcarts.10

Labor on the incline consisted mostly of Irish immigrants. Though the number of laborers varied depending on the report, documentation suggests between 1000 and 1400 men were used to construct the first fifteen miles of track.  The majority of these laborers were employed on the incline.11  Between seventy and one hundred laborers built the “big cut”.12  These laborers would be paid fifteen dollars a month and would receive between “1 and 8 jiggers of whiskey a day” (roughly one to four ounces). The more whiskey a foreman gave out, the better workers he would get.13 The Irish lived near the site of the incline, and the area today is known as "Irish Hollow".

Motive power on the incline has had three key forms of power.  After its completion, teams of horses pulled individual train cars up the incline.  Train cars were allowed to travel down the incline by gravity.14 In 1847, the railroad installed a cog system on the incline, and a special geared steam locomotive pushed trains up the hill.  This system was not satisfactory, and the railroad moved to replace it.15  The result was the creation of the Reuben Wells, a locomotive heavy enough to not slip when pushing trains up the hill.  The locomotive was the basis for all future incline trains until they were replaced by diesel locomotives in 1953.16  Today, the Reuben Wells can be seen in the Indianapolis Children's Museum.

Currently the incline is not in use, but visitors are able to walk along trails installed by the Heritage Trail Conservancy and get a good view of the incline and the stone arch culvert that carries the incline over Crooked Creek.

Business and Economic Development
Railroads and Transportation
Science and Technology