Constructed in 1799, St. Mark's in-the-Bowery is the oldest continuously operating Christian church and the second-oldest public building in New York City. It is built on the site of Dutch Director-General Peter Stuyvesant's private chapel, which stood on the farmland (bouwerij, or Bowery) he purchased in 1651. The parish is now a progressive Episcopal Church which functions as a community space for the East Village, offering modern dance, ballet, and poetry. 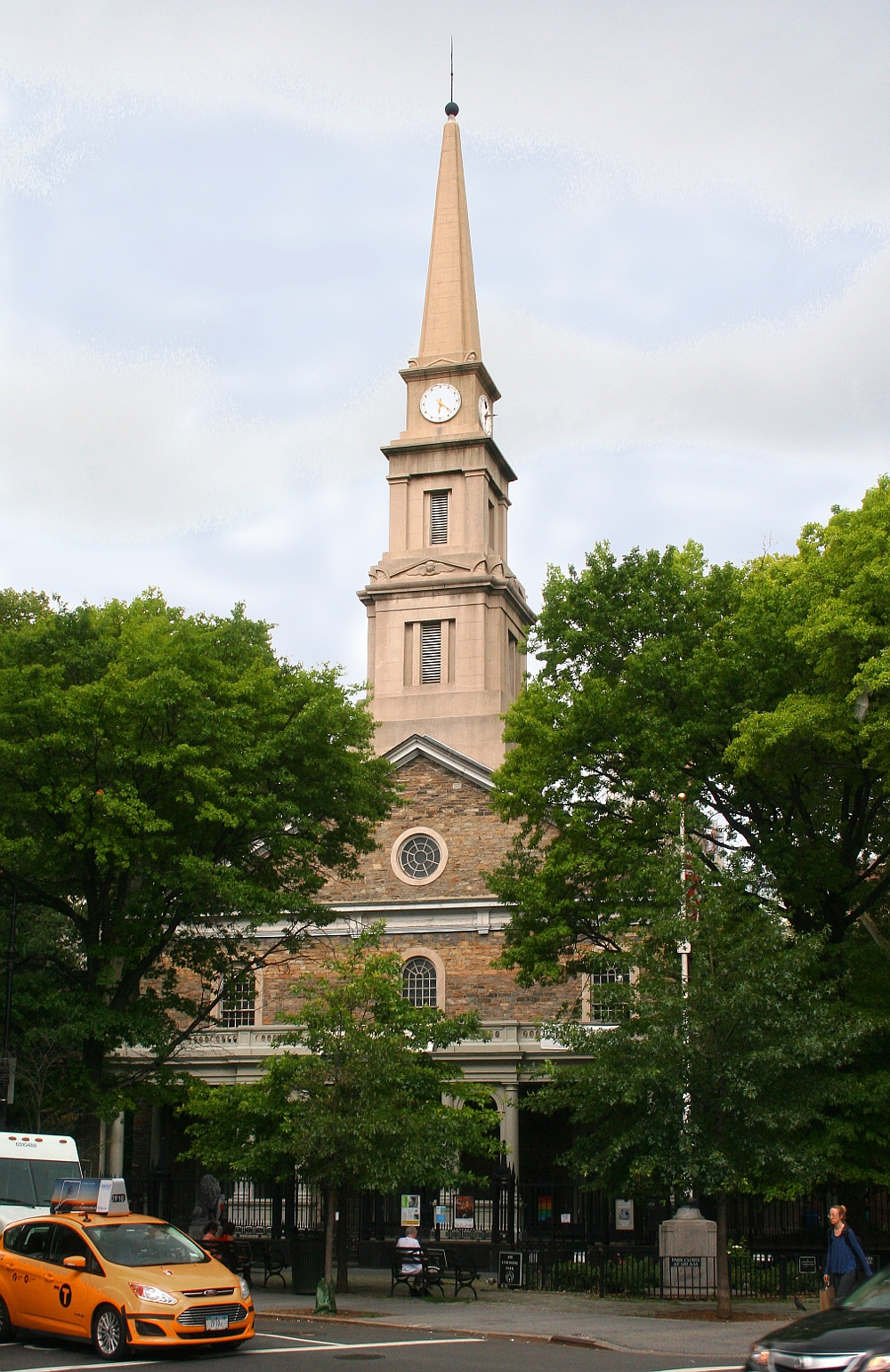 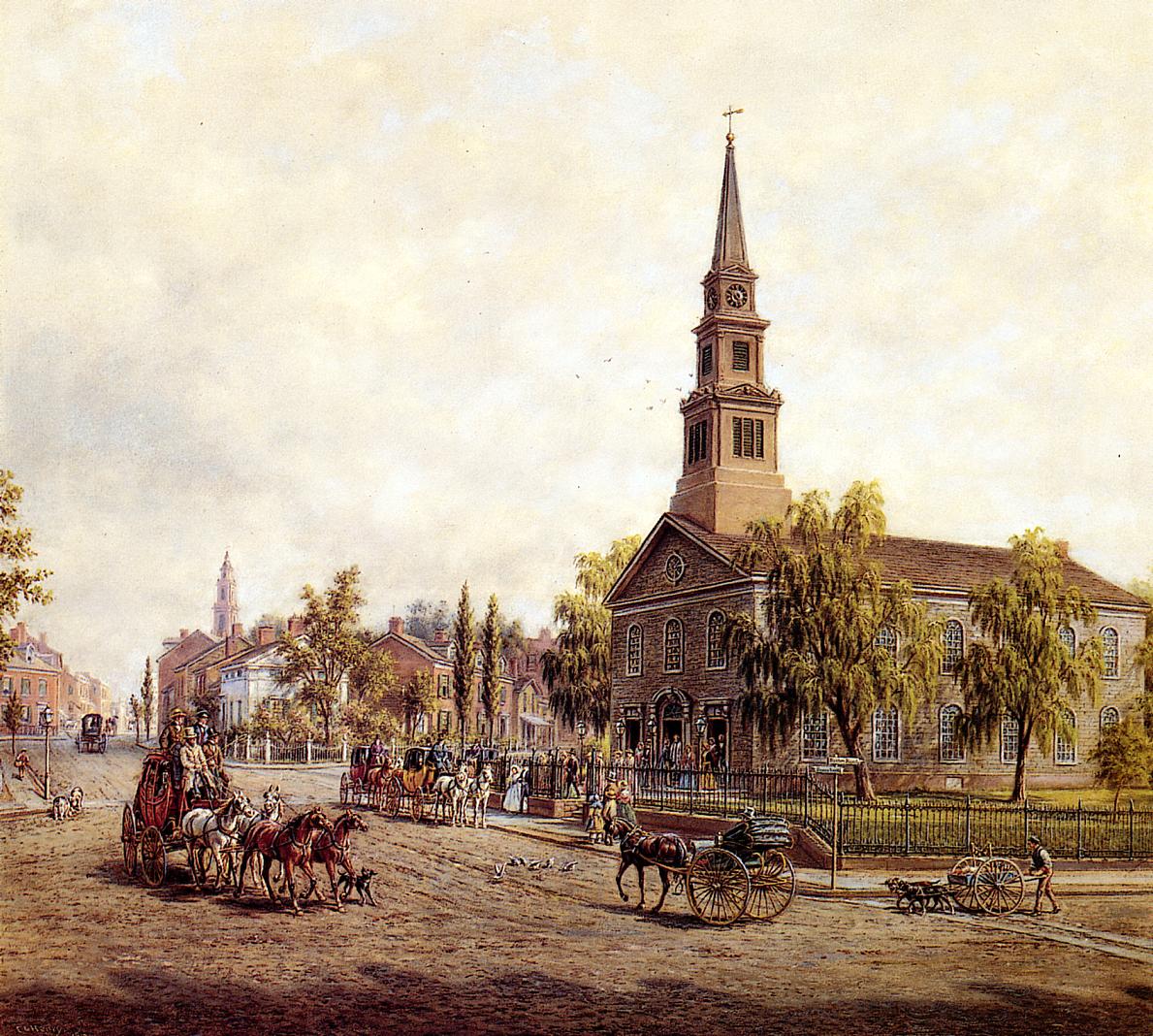 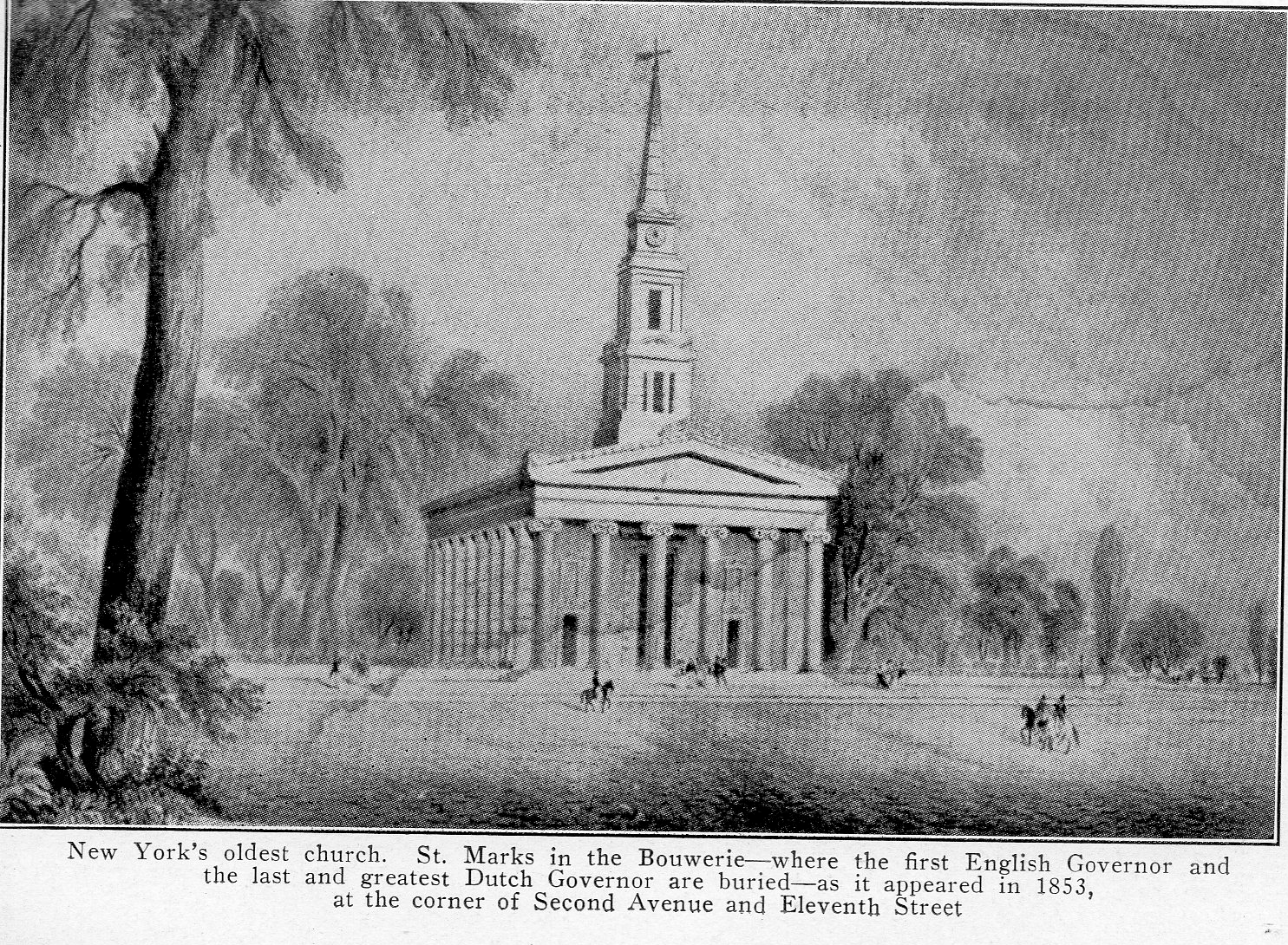 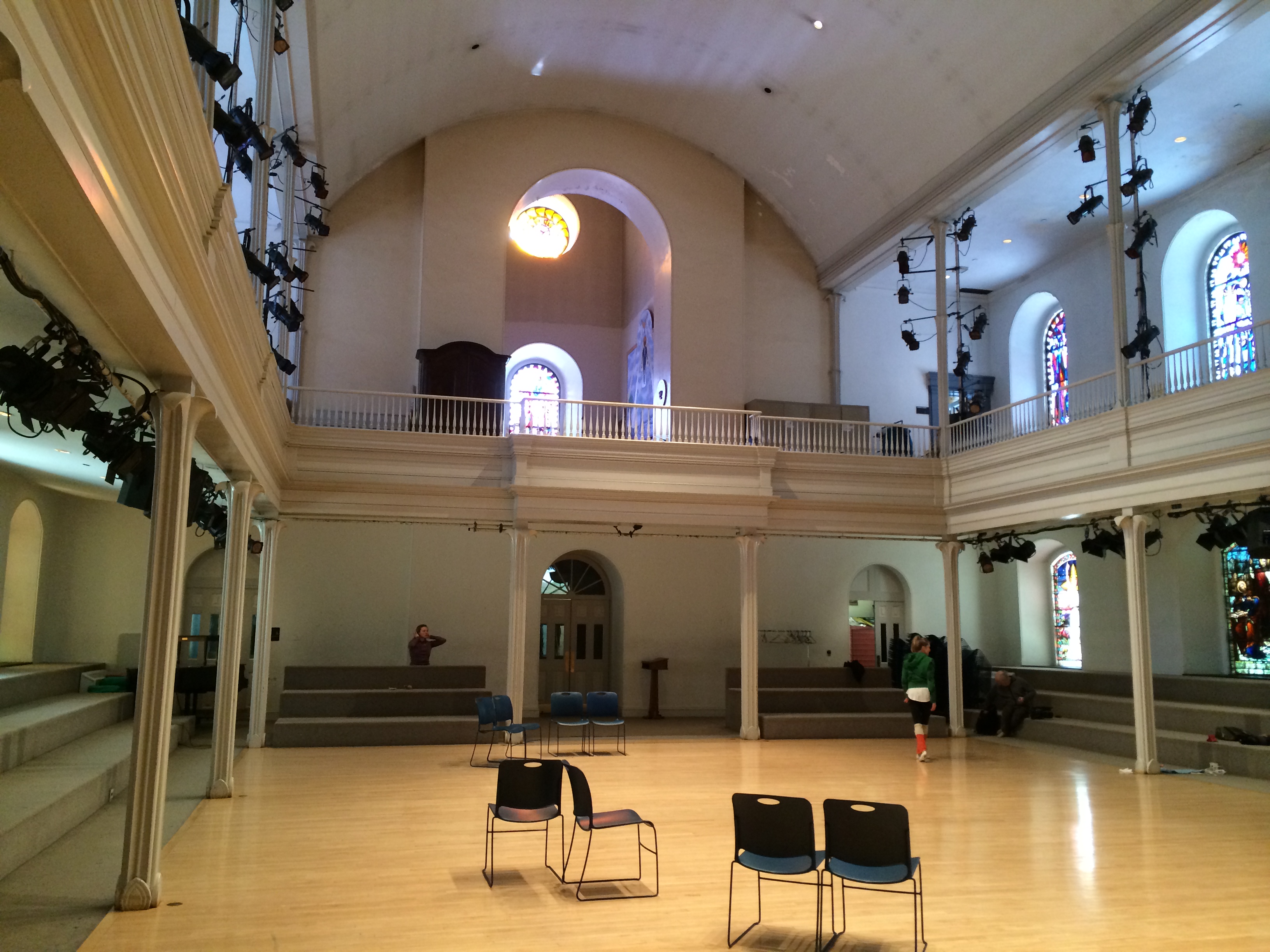 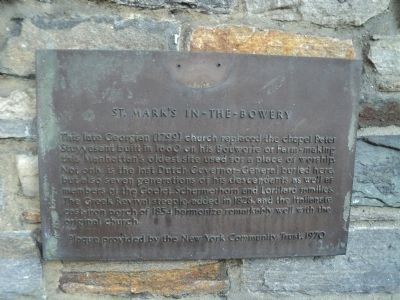 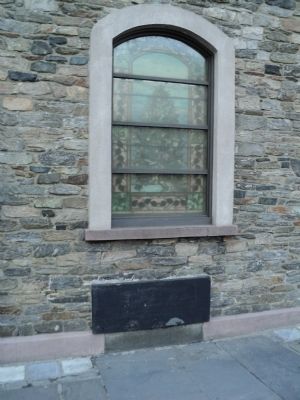 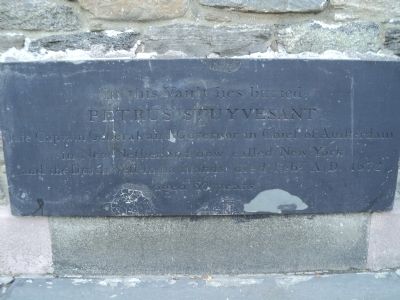 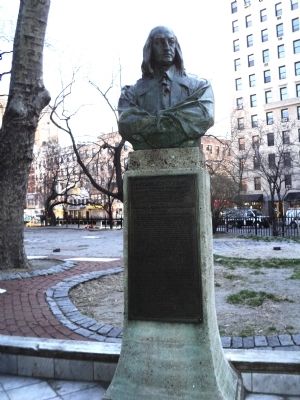 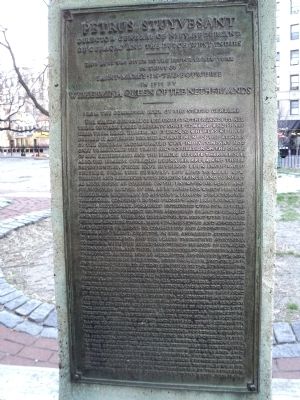 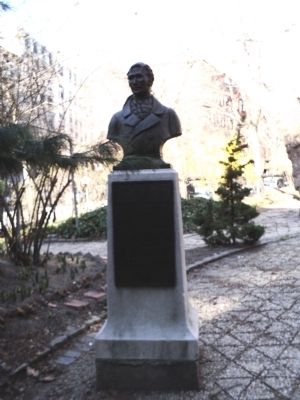 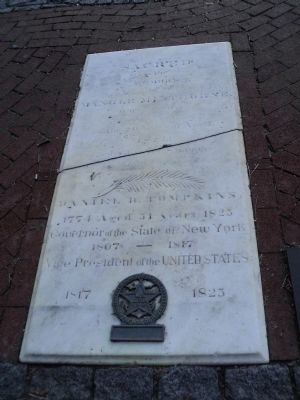 Constructed in 1799, St. Mark's in-the-Bowery is the oldest continuously operating Christian church and the second-oldest public building in New York City. It is built on the site of Dutch Director General Peter Stuyvesant's private chapel, which stood on the farmland (bouwerij, or Bowery) he purchased from the Dutch West India Company in 1651. Petrus [Peter] Stuyvesant (1592-1672) served first as governor of a West Indies island, during which time he lost a leg; in 1647, the Dutch West India Company appointed him Governor of the colony of New Amsterdam (now known as New York City). An outspoken reformer, Stuyvesant angered many settlers by regulating the sale of liquor and the fur trade, forbidding the sale of liquor to Native Americans, and demanding that citizens of New Amsterdam convert to the Dutch Reformed Church. Under his administration, New Amsterdam expanded, a protective wall was constructed at Wall Street, and a canal which became Broad Street (later, Broadway) was built. When English warships entered New York Harbor in 1664, however, New Amsterdam citizens refused to defend the city, and Stuyvesant was forced to cede the city to the English. With New Amsterdam renamed New York, Stuyvesant returned to Holland, where the Dutch West India Company blamed him for the loss of the colony. Stuyvesant returned to his farm in New York City, where he lived for the remainder of his life.

After the death of Peter Stuyvesant in 1672, he was buried in a vault beneath his Dutch Reform Chapel in the Bowery. His great-grandson, Peter Stuyvesant II, requested in 1793 that Trinity Church rebuild the family chapel on the site of the vault. St. Mark's in-the-Bowery was established as the first New World Episcopal Parish independent of Trinity Church, with the legal assistance of Trinity attorney and (later) United States President Alexander Hamilton. Construction began in 1795, under the direction of architect and stonemason John McComb, Jr. The sanctuary is a Georgian-style fieldstone structure, with later additions by the architectural firm of Ithiel Town and Martin E. Thompson (who designed the steeple, 1828; renovated the interior, 1836; and replaced the original square balcony pillars with Egyptian Revival columnns, 1839); by John C. Tucker (who designed the stone portion of Parish Hall, 1835); by James Renwick, Jr. (who designed the brick portion of Parish Hall, 1861), and by architect James Bogardus (who designed the cast-iron portico in the 1850s). St. Mark's in-the-Bowery was attended by prominent families of the early 1800s, many of whom were buried in the churchyards. Burials include two Mayors of New York City, Gideon Lee and Philip Hone, as well as Peter Stuyvesant himself and Daniel Tompkins (namesake of nearby Tompkins Square, Vice President of the United States under Monroe, and former Governor, responsible for abolishing slavery in New York State). The 1876 burial of one prominent parishioner, department store entrepreneur A. T. Stewart, was disturbed when grave robbers stole his body on November 6, 1878, holding it for ransom for three years before the widow finally recovered it in 1881.

St. Marks-in-the-Bowery
This late Georgian (1799) church replaced the chapel Peter Stuyvesant built in 1660 on his Bouwerie or Farm - making this Manhattan’s oldest site used for a place of worship. Not only is the last Dutch Governor-General buried here, but also seven generations of his descendants as well as members of the Goelet, Schermerhorn and Lorillard families. The Greek Revival steeple, added in 1828, and the Italianate cast-iron porch of 1854 harmonize remarkably well with the original church. / Erected 1970 by New York Community Trust.

Bust of Petrus Stuyvesant
Director General of Niev Nederland / of Curacao and the Dutch West Indies / This bust was given to the people of New York in trust of Saint Mark’s-in-the-Bowerie in 1915 by Wilhelmina Queen of the Netherlands / From the Commissie Boek of the States General / The States General of the United Netherlands to all those to whom these presents shall come or who shall hear them read, health. Be it known whereas we have deemed it advisable for the advancement of the affairs of the General Incorporated West India Company not only to maintain the trade and population on the coast of New Netherland and the places situate thereabout, also the islands Curacao, Buenaire, Aruba, and their dependencies, which have hitherto been encouraged thither from this country, but also to make new treaties and alliances with foreign princes and to inflict as much injury as possible on the enemy in his forts and strongholds as well by sea as by land for which purpose it becomes necessary to appoint a person director we therefore, confiding in the probity and experience of Petrus Stuyvesant formerly entrusted with our affairs in, and the government of, the aforesaid island of Curacao and the places thereon defending, we being well pleased with his services there, have commissioned and appointed, by these presents do commission and appoint the said Petrus Stuyvesant director in the aforesaid countries of New Netherland, and the places thereunto adjoining, together with the afore-mentioned islands of Curacao, Buenaire, Aruba, and their dependencies, to administer with the council as well now as hereafter appointed with him the said office of director both on water and on land and in said quality to attend carefully to the advancement, promotion, and preservation of friendship alliances, trade and commerce; to direct all matters appertaining to traffic and war, and to maintain, in all things there, good order for the service of the United Netherlands and the General West India Company to establish regularity for the safeguard of the places and forts wherein, to administer law and justice as well, civil and criminal, and moreover to perform all that concerns his office and duties in accordance with the charter and the general and particular instructions herewith given, and to be hereafter given him, as a good and faithful director is bound and obliged by his oath in our hands to do which done we therefore order and command all other officers, common soldiers, together with the inhabitants and natives residing in the aforesaid places as subjects and all whom it may concern, to acknowledge and obey the said Petrus Stuyvesant as our director in the countries and places of New Netherland and in the islands of Curacao, Buenaire, Aruba and their dependencies, and to afford all help, countenance and assistance in the performance of these things as we have found the same to be for the advantage of the Company done in our assembly at the Hague, on the XXVIII July 1646 / Erected 1915 by Wilhelmina Queen of the Netherlands

Daniel D. Tompkins Marker
A Great American / Son of a Revolutionary patriot / Born in Fox Meadows (Now Scarsdale) N.Y. June 21, 1774 / Died in Tompkinsville, Staten Island N.Y. June 11, 1825 / Governor of New York State 1807-1817 — Vice President of the United States 1817-1825 / Military Commander of the Third Military District October 14, 1814 / Governor Tompkins sustained the credit of the United States Government, with his personal funds, at a time when the banks of New York refused to loan to the government on its notes, without his endorsement. A graduate of Columbia College 1795. A member of the state constitutional convention 1821. / President Madison handed him the portfolio of Secretary of State, which he refused. Founder of the New York State Historical Society and Chancellor of the University of New York. / Daniel D. Tompkins held not only the office of governor of the state but was paymaster quartermaster, commissary, and general distributing agent of the State of New York and the United States. / Erected by The United States Daughters of 1812 of the State of New York / November 2, 1939