The neo-Italian Renaissance building at 538 East 11th Street was originally constructed in 1904-1905 as a public bath house for poor immigrants living in the East Village. In the 1990s and early 2000s, it was home to photographer Eddie Adams' Bathhouse Studios [1; 2]. 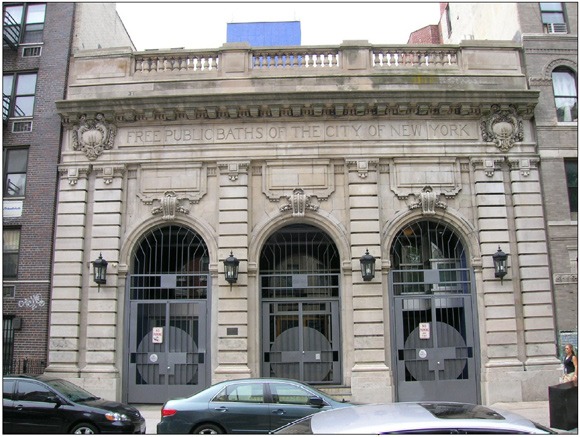 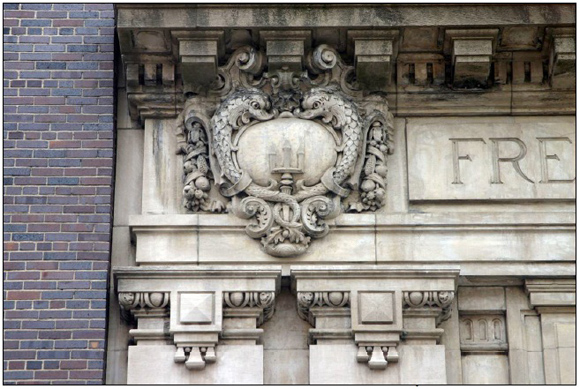 The neo-Italian Renaissance building at 538 East 11th Street was originally constructed in 1904-1905 as a public bath house for poor immigrants living in the East Village. In the 1990s and early 2000s, it was home to photographer Eddie Adams' Bathhouse Studios [1; 2].

Thirteen free public baths were constructed by the City as part of a social reform movement to help the poor, particularly immigrants, at the turn of the 20th century. Intended to promote health, the baths were used as much for keeping cool in the summer as actually bathing [2]. The public bath movement, begun in the 1840s by Dr. Simon Baruch, finally reached New York's crowded tenements (where no bathing facilities existed) thanks to the efforts of charitable organizations and Dr. Baruch [1; 2]. At that time, the East Village was a German immigrant neighborhood [1]. The 11th Street Public Bathhouse was designed by prominent New York architect Arnold W. Brunner, who was commissioned by the City. Decorated with nautical themed friezes, its façade is Indiana limestone. The building featured separate entrances and changing and bathing areas for men and women, with seven bathtubs and 94 "rain baths" (showers) [1; 2]. The shower rooms were lit by skylights on both the first and second floors. On December 18, 1905, it opened to the public. Bathers were allowed twenty minutes and had to provide their own soap and towels. During heat waves, particularly that of 1906, when more heat-related deaths occurred than at any other time in the city's history, the baths were swarmed, but the rest of the time attendance was low. In response, pamphlets were written and classes offered in tenement neighborhoods to educate the public about the importance of hygiene, but attendance declined nonetheless. Partly, this was due to the introduction of the Tenement House Law of 1901, which required new buildings to include toilets; many owners included bathing facilities as well [1]. The 11th Street Baths were among the most used of the facilities in the city, and remained open until 1958 [1; 2].

In 1961, the building was converted into a parking garage and, later, as the neighborhood declined in the 1970s and 1980s, the bathhouse was used as a warehouse, wholesale grocery, and art restoration space. Unfortunately, the building was also the site of drug deals and earned a reputation as such [1]. In 1980, the block on which the 11th Street Baths are located was the setting for the film Ragtime (James Cagney's last role). The bathhouse became the production crew's workspace during the filming, and the block was restored. Eddie Adams, a Pulitzer Prize-winning photojournalist, purchased the building in 1995 and converted it into a studio [1; 2].