The Aon Center was completed in 1974 as the Standard Oil Building. It is 1,136 feet in height and has 83 floors. This makes it the third tallest building in Chicago. Only the Willis, formerly the Sears, Tower and the Trump International Hotel and Tower surpass it in height. The US operations of the company Aon are housed here. Aon is a British company whose main headquarters are in London. The services the company provides include risk management, insurance and reinsurance brokerage, investment banking, human resource solutions, and outsourcing. 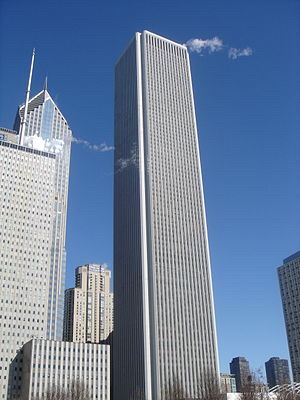 The Aon Center within the Chicago skyline

Another view of the center 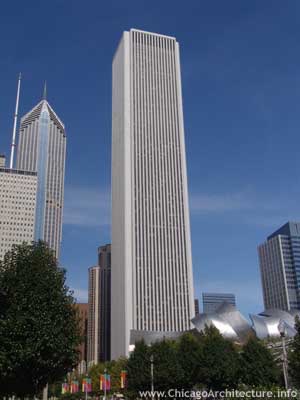 Originally known as the Standard Oil Company of Indiana building, or "Big Stan," it later changed to the Amoco building and, finally (as it is known today), the Aon Center. Upon construction in 1973, it was the tallest building in the city and fourth tallest in the world, but the completion of the Sears Tower (now known as the Willis Tower) quickly surpassed that mark by the following year. The building reminds one of the U.S. transition to oil from coal as its principal fuel, its economic importance, as well as the legacy of famous entrepreneurs arising out of the Gilded Age such as John Rockefeller, founder of Standard Oil.

John Rockefeller, who exists as one of the country's wealthiest people, founded the Standard Oil Company in 1863 by investing in a struggling Cleveland, Ohio, refinery. By 1870, he established the name "Standard Oil," and by the early 1880s , controlled nearly 90 percent of all U.S. refineries and pipelines. Critics accused Rockefeller of engaging in unethical business practices and colluding with railroads. By 1911, the U.S. Supreme Court found Standard Oil in violation of anti-trust laws and ordered it to dissolve.1

Its tie to Chicago can be found in the 1889 formation of a Whiting, Indiana refinery by Standard Oil.

By the mid-1890s, the Whiting plant had become the largest refinery the United States, handling 36,000 barrels of oil per day and accounting for nearly 20 percent of the total U.S. refining capacity. During these years, the company's main product was kerosene, which was used in lamps. By 1910, when it was connected by pipeline to oil fields in Kansas and Oklahoma, as well as Ohio and Indiana, the Whiting facility had about 2,400 workers.

In 1911, when the U.S. government forced Rockefeller to break up his oil giant, Standard of Indiana—which had its main offices in downtown Chicago—emerged as an independent company; it soon began to purchase oil wells of its own. During the 1910s, the company pioneered a new thermal “cracking” process, in which crude oil was processed under pressure in order to produce higher yields of gasoline. By this time, the beginning of the automobile age, gasoline had become the leading product of oil refineries.

In the early 1970s, when the company moved into new offices [to what is now the Aon Building], Standard Indiana still employed about 8,000 people in the area. In 1985, as annual sales neared $30 billion, the company changed its name to Amoco, which then ranked as the nation's sixth-largest oil company. By that time, Amoco and other leading oil companies were huge global corporations that not only refined oil but also explored and drilled for it; Amoco also had a large chemicals division. At the end of the 1990s, when Amoco employed about 4,000 people in the Chicago area, it merged with British Petroleum (BP). While most of the company's jobs still remained in Chicago by the early 2000s, Amoco's old operations had become known by the BP name, and management of the company was directed from London.2

The building's construction inspired those designing the World Trade towers of New York City (which were destroyed in the attacks of September 11, 2001).  Although largely successful, one aspect of failure involved its use of  43,000 slabs of Carrara marble to cover its facade, making it --- at the time -- the worlds largest marble-clad building. However, a 350-pound slab of the rock fell through the roof of nearby Prudential Center in 1975, which eventually led to the marble being removed and replaced with Mount Airy white granite between the years 1990 and 1992.3

Like many skyscrapers, the building has undergone several sales and involved many different major tenants, notably in the changing type of economy in the 21st century. The 601W Companies, a New York private real-estate investment company, purchased the Aon Center for more than 700 million dollars, or $260 per square foot. The idea of creating Chicago's third observation deck (along with Willis Tower and the John Hancock Center) has been discussed, noting that it could generate tens of millions of dollars.4

From Rockefeller and the Gilded Age idea of industry to the 21st Century economy largely based on technology, service industry, and technology,5 the Aon Center is more than a majestic  architectural piece, it's a monument to the broader idea of Chicago and American history.

1 This general summary, along with more extensive information regarding the the history of Standard Oil can be found here: Elizabeth Granitz and Benjamin Klein, "Monopolization by" Raising Rivals' Costs: The Standard Oil Case," The Journal of Law and Economics 39, 1 (1996): 1-47.