Bluestone State Park encompasses 2,100 acres of land in southern West Virginia near Hinton. The park lies adjacent to Bluestone Dam and Lake, which was built to control flooding along the New River. The resulting reservoir created a 36 mile lake which is now a popular recreation destination in the area. The state park and lake are open to the public. 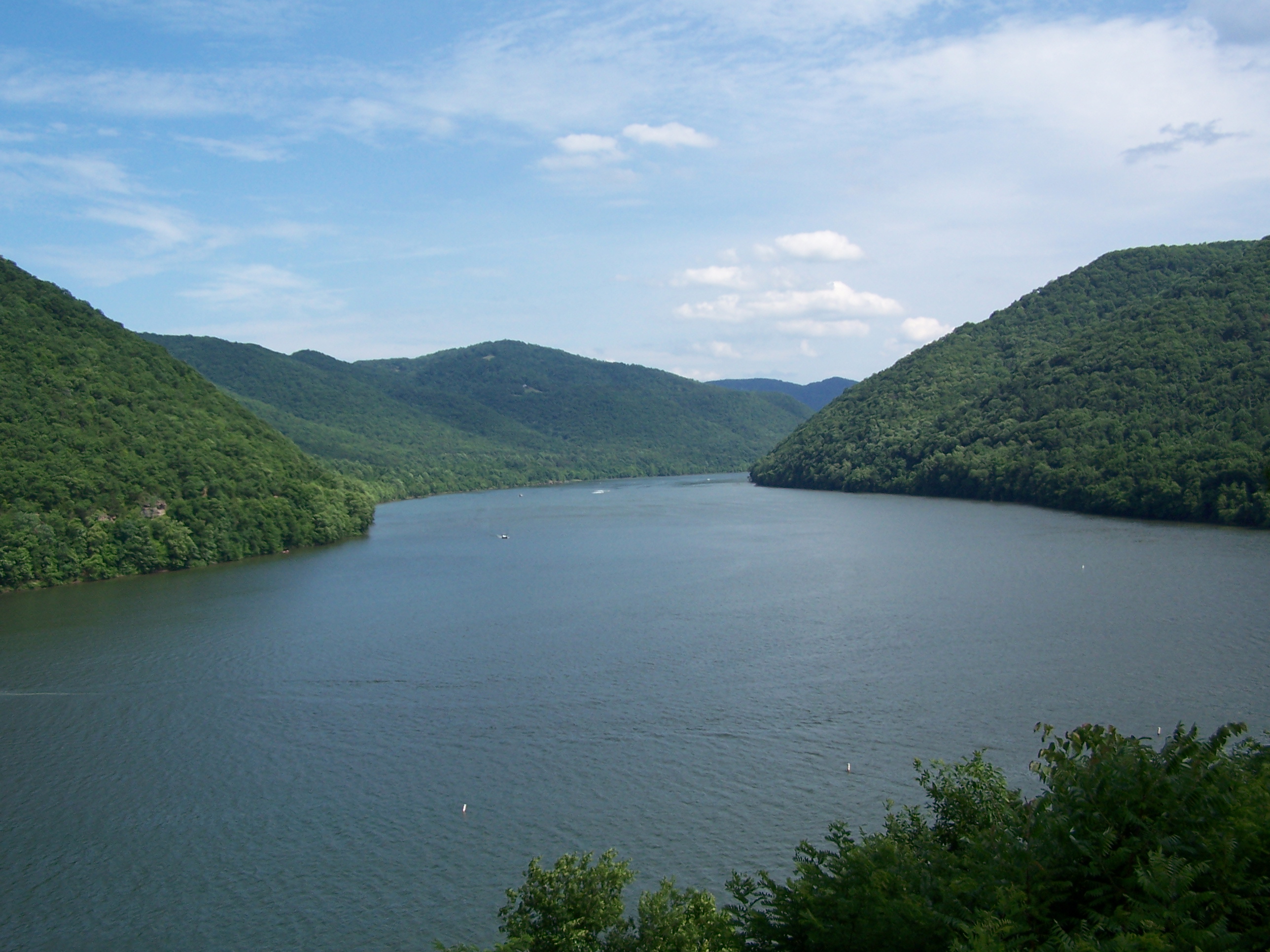 Construction of the dam 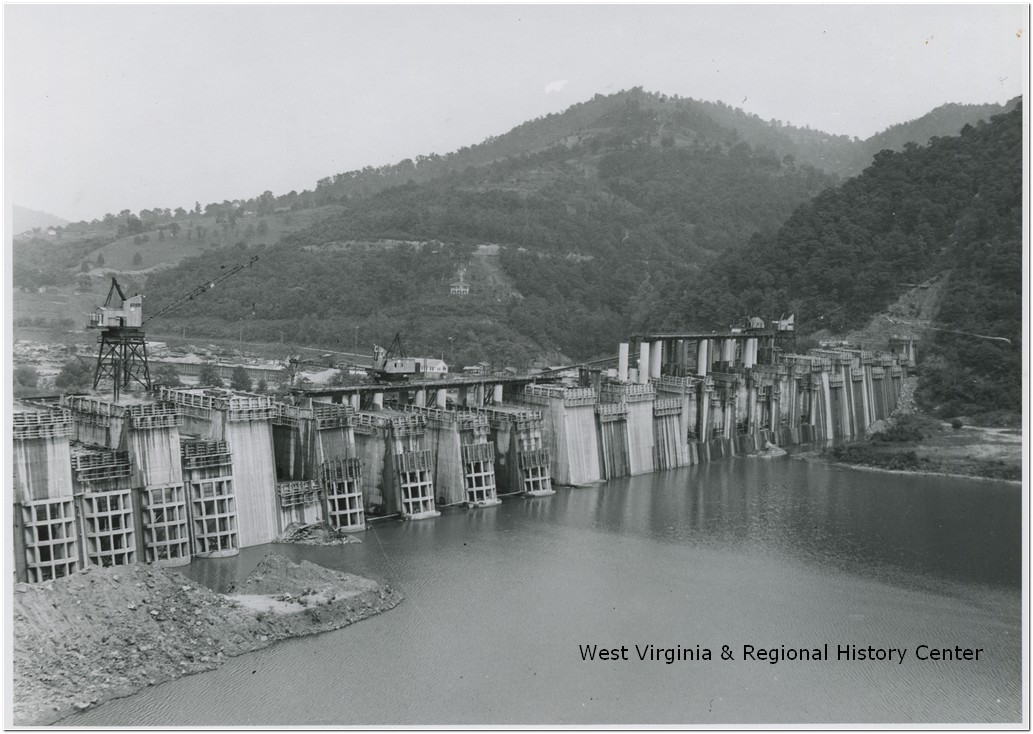 Postcard of the Bluestone Dam 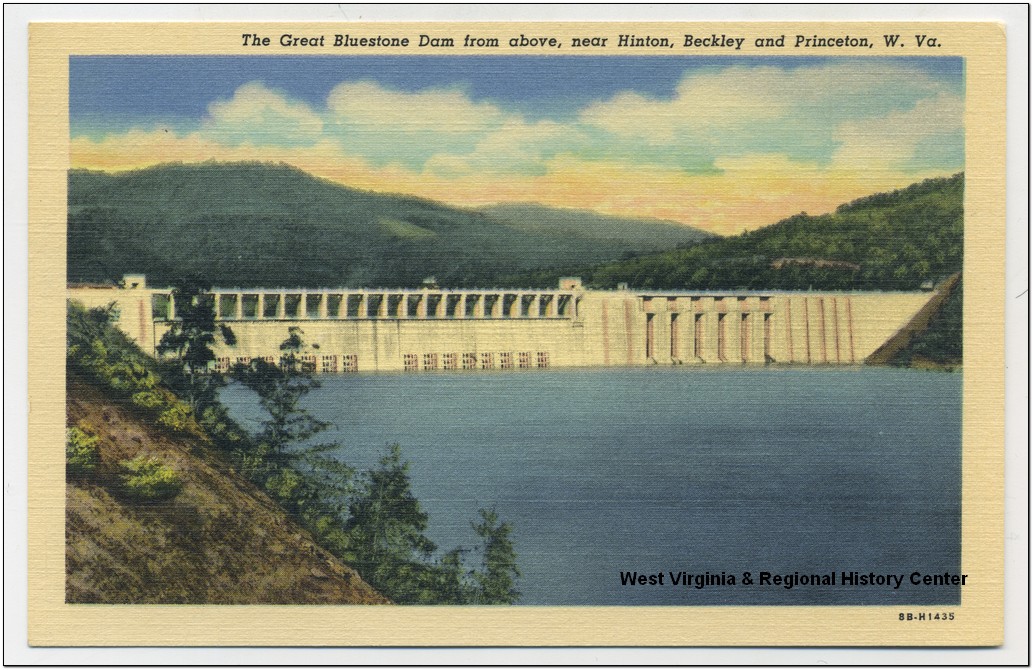 Bluestone State Park entered the West Virginia State Park system in 1955. It was named after the Bluestone River that forms in Tazewell County, Virginia. The river takes its name from the blue-grey color of limestone that was found along the banks of the river. The total length of the river is 86.7 miles, about 55 miles of which are located in West Virginia. It is believed that in her famous escape from Indian captivity Mary Draper Ingles crossed the Bluestone River (1).

One of the most popular attributes of the park is the Bluestone Lake, formed by the Bluestone Dam. The U.S Army Corps of Engineers built the dam on the New River for flood control and it is now one of tee major flood control dams in the State. Construction of the dam was authorized by an executive order of President Franklin Roosevelt in 1935. Construction on the dam started in 1942, but was halted in 1943 because of World War II. Work resumed in 1946, and the dam was finally in operating order by January of 1942. The dam, totaling 165 feet high and 2,048 feet long, was totally finished in 1952. The total cost of the dam construction was estimated to be $30 million. The resulting lake is the third largest body of water in West Virginia (2). In 1997, the lake became a supplier of public water to the towns of Hinton, Princeton, and their surrounding communities. The lake and dam continue to be maintained by the Army Corps of Engineers today.

Due to the Federal Dam Safety Assurance program, Bluestone Dam underwent construction in the early 2000s in order to anchor it to the bedrock. Before completion of the dam, flooding was a major problem around the New River and Bluestone River. In 1999, the Army Corps of Engineers estimated that the dam had prevented more than $1.6 billion in possible flood damages. Along with that estimate, they announced a 20-year project to upgrade the dam to modern safety standards. The populous Kanawha Valley is located downstream from the dam and relies on the structure for flood safety. The estimated total cost for the restoration project is $300 million and is underway today (3).

Thanks in part to the lake formed by the dam, Bluestone State Park is a popular destination for outdoor activities. The park offers hiking trails, boating, fishing, and more. The heavily forested park also offers many cabins for rent throughout the year. The Bluestone State Park's history is closely connected to one of the most important infrastructure advancements in West Virginia, the Bluestone Dam. Thanks to the dam and its current restoration, the surrounding area of Hinton and the Kanawha Valley downstream are protected from the threat of major flooding.