Robertson Millpond Preserve is the site of a 200 year old gristmill dam. William Avera, a local farmer build the dam and mill. The mill and dam operated until the 1940s or 1950s. It is classified as an historic landmark by the Wake County Historic Preservation Commission. The millpond is also considered a Natural Heritage site by the N. C. Natural Heritage Program. The dam created a rare Blackwater swamp containing bald-cypress trees and rare animal species.

Photo of the Robertson Pond Gristmill during its operation. (Courtesy of Wake County Parks, Recreation and Open Space. 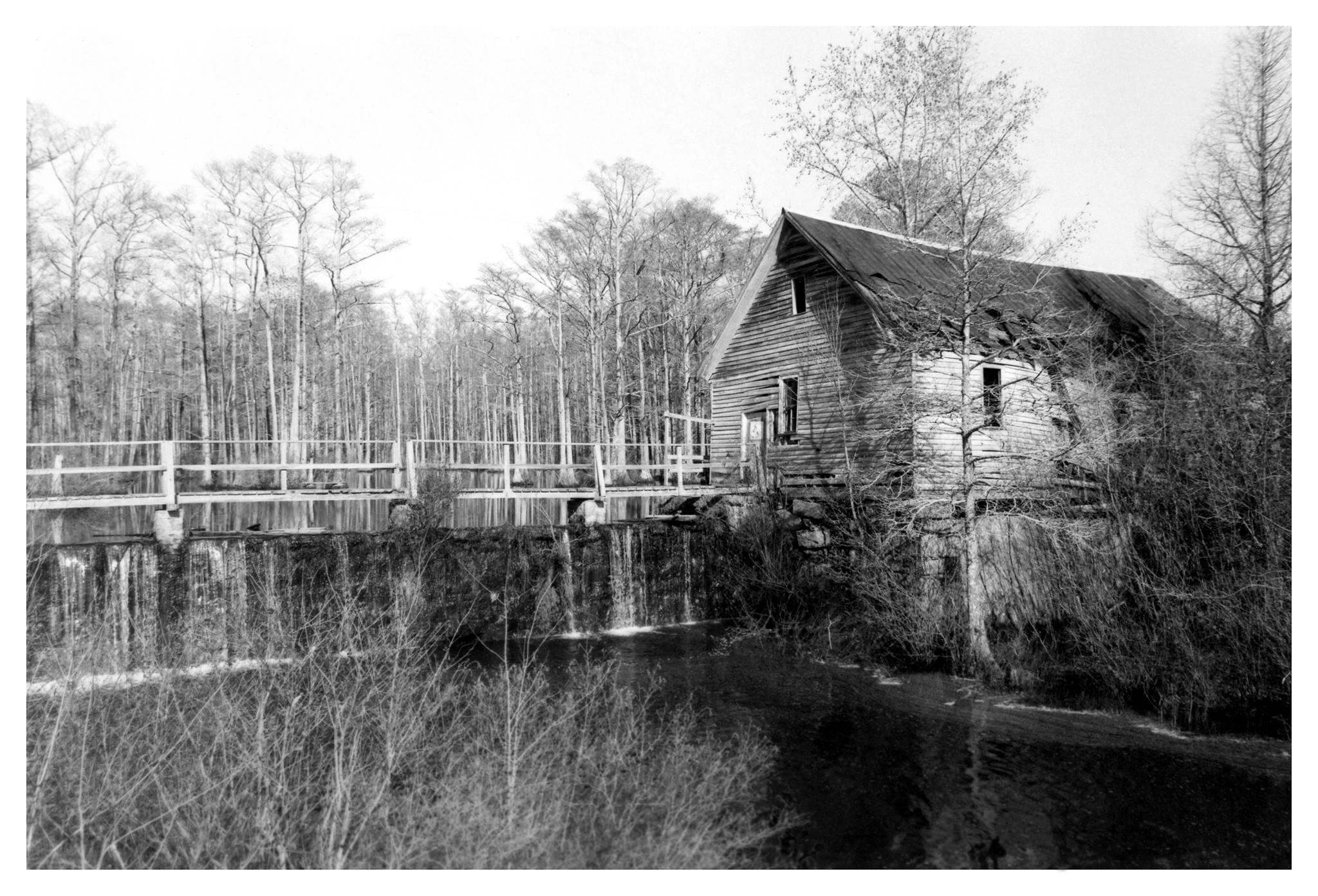 Photo of the boathouse on Robertson Millpond which operated after the closing of the gristmill. (Courtesy of Wake County Parks, Recreation and Open Space 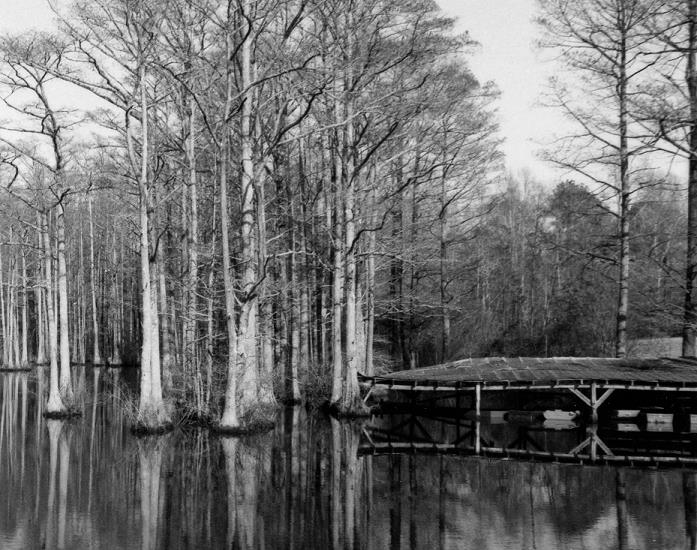 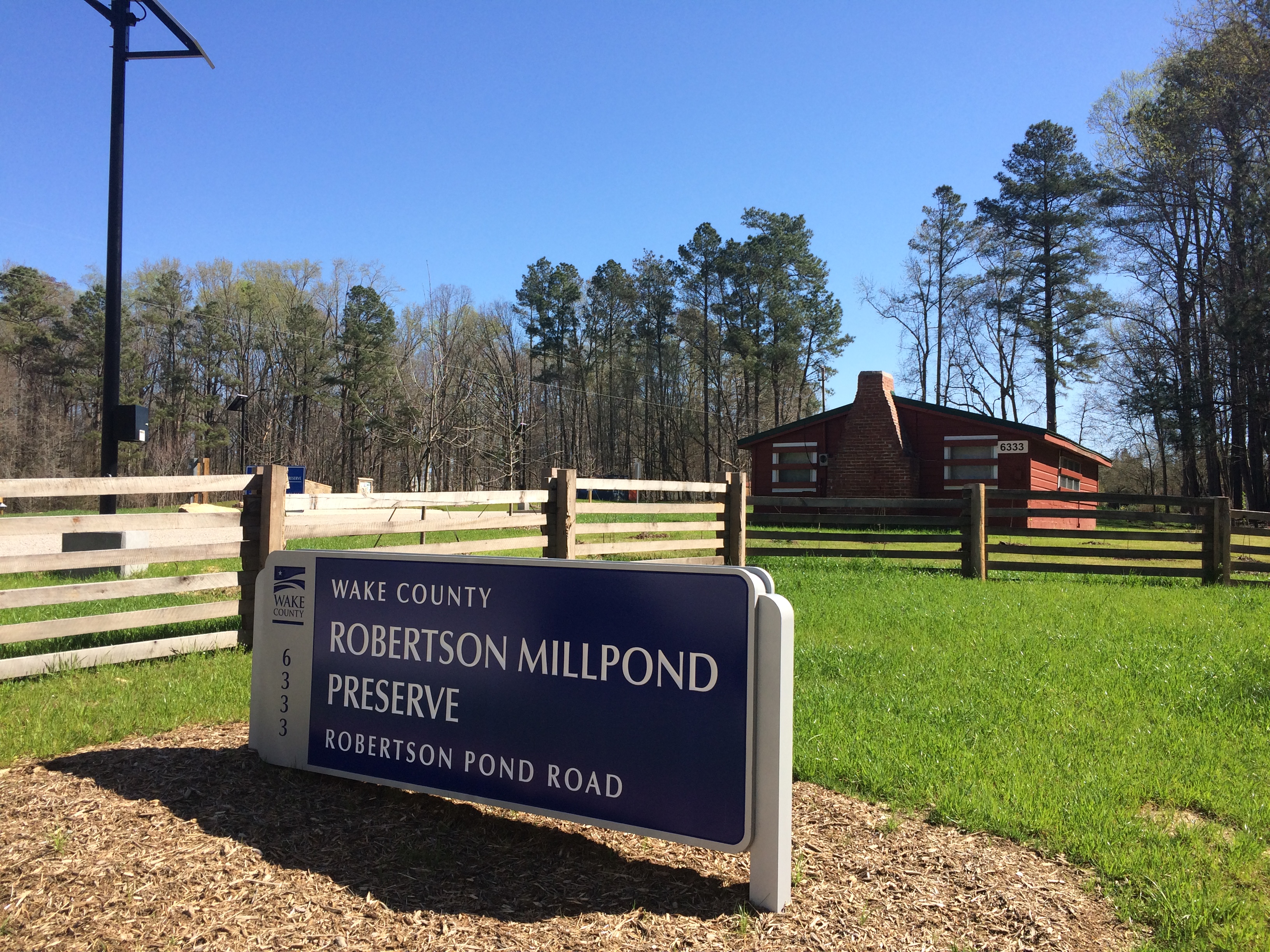 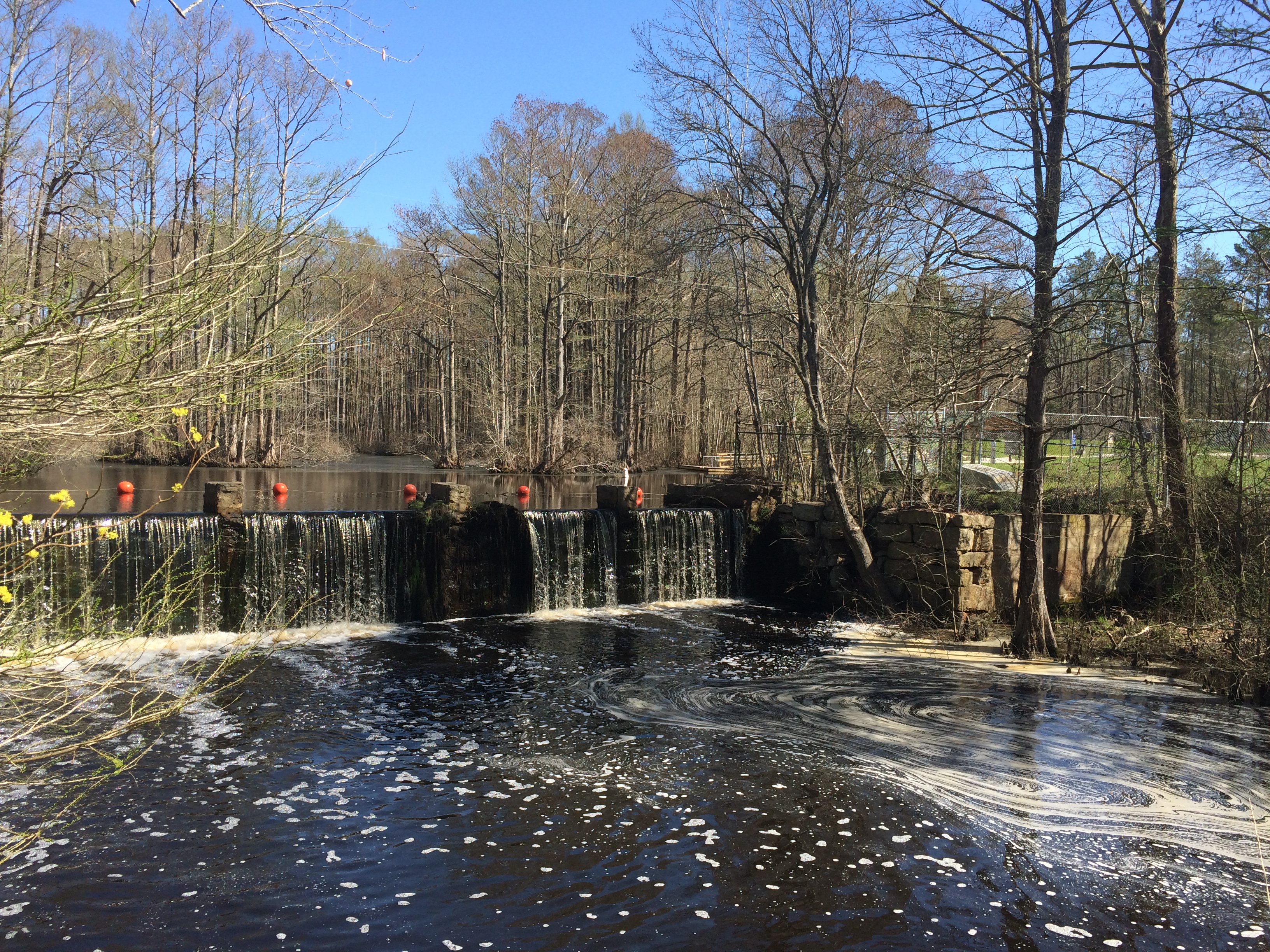 Site of the original gristmill. (Photo by D. Chad Guthrie) 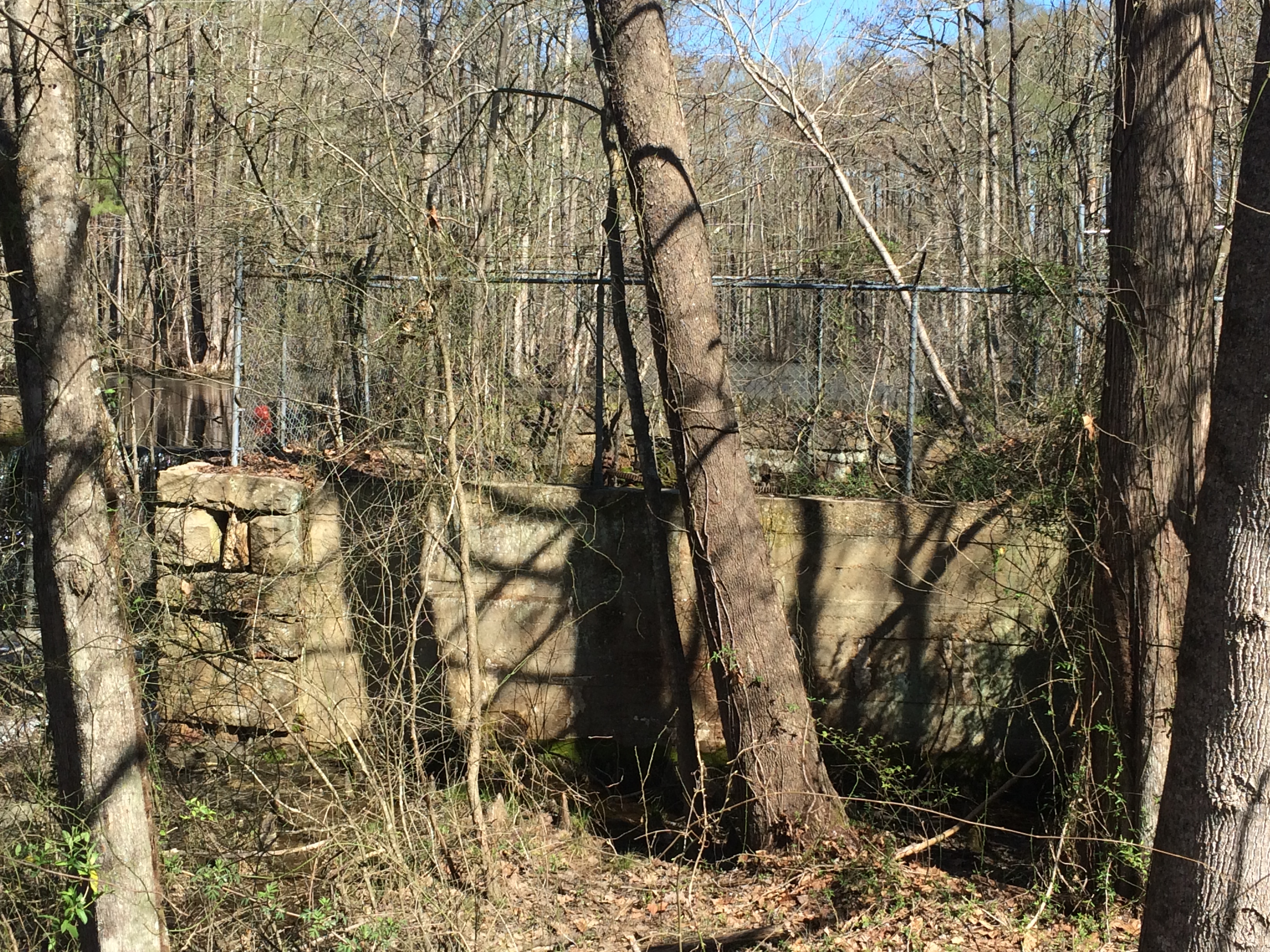 An example of the Blackwater swamp at Robertson Millpond and Buffalo Creek. (Photo by D. Chad Guthrie) 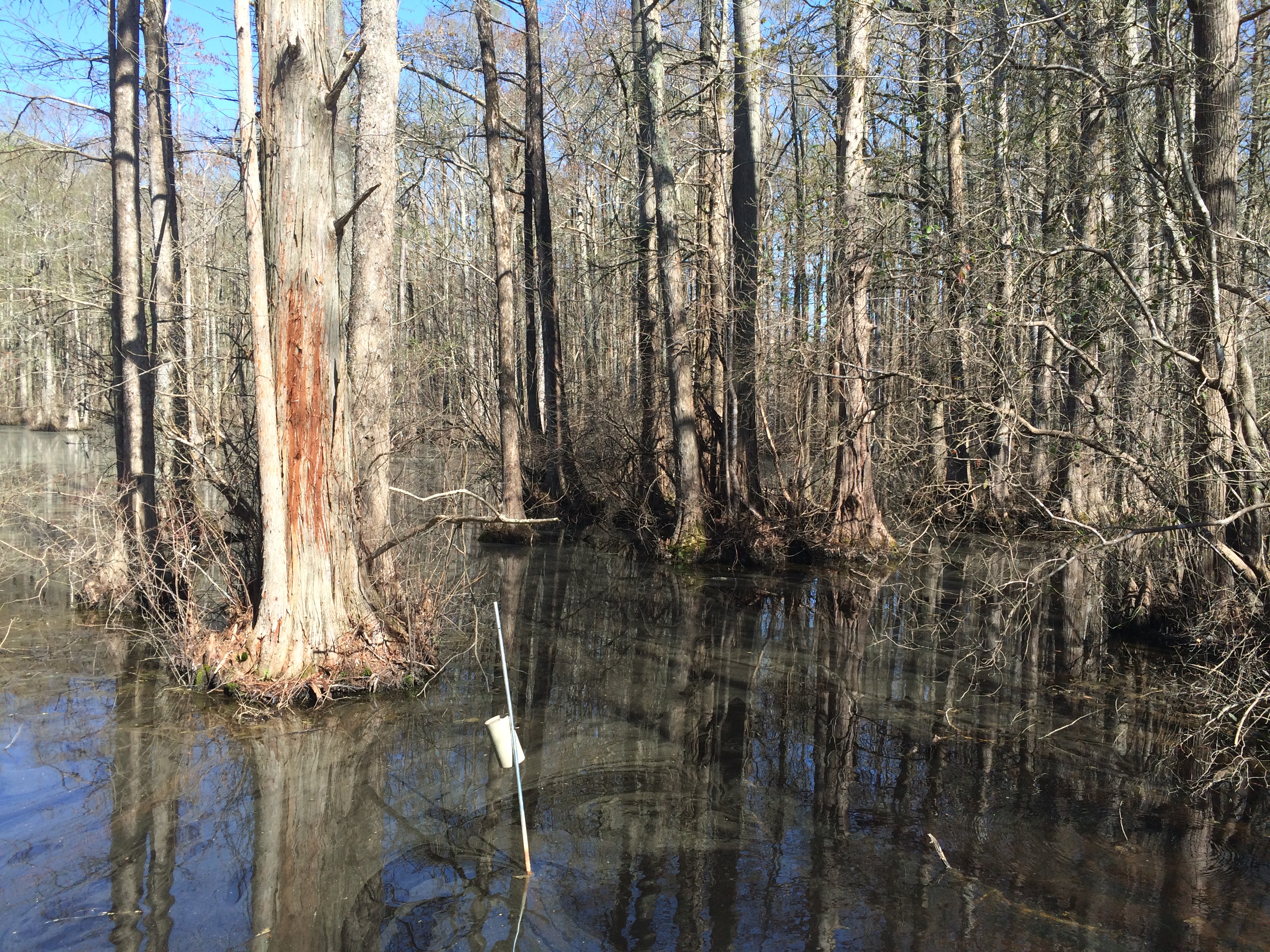 The Robertson Millpond Preserve is an 85-acre tract of land owned and maintained by Wake County’s Parks, Recreation and Open Space Program.  Wake County purchased the millpond in September 2013 using parks and open space bond funds.  In order to preserve the area’s historic and natural heritage, the voters of Wake County overwhelmingly approved a $15 million bond in 2000 and a $26 million bond in 2004.  In addition to protecting water resources and open spaces for recreation, the bond sought to preserve the “historic uses of working lands (farms and forests) [which] will also help support a vibrant agricultural economy that has historically defined much of the county’s sense of place.”  (Wake County Open Space Program)  Wake County operates the millpond as a park, recreational area, and a nature preserve.  The public is welcome to fish, paddle or simply stroll along designated paths.

The millpond was built in the 1820s by William Avera, who owned a nearby 600 acre farm.  The dam is located along a portion of Buffalo Creek.  The dam powered a gristmill, which ground the grain harvested by Avera and other local farmers.  The gristmill became a community meeting place.  Farmers discussed the usual topics:  the weather, the outlook for this year’s harvest, politics.  The family shut down the gristmill in the 1950’s and removed the gristmill a couple of decades later.  The dam stayed and remains intact today.  Despite the closing of the gristmill, Robertson Millpond remained a community gathering place.  The locals would hunt and fish.  A boathouse was located on the pond where people rented boats to fish or paddle along the pond and creek.  Due to its history and cultural heritage, the Wake County Historic Preservation Commission granted Robertson Millpond status as a historic landmark in 2014.  It is an example of Wake County’s efforts to preserve the agricultural heritage that characterized the majority of North Carolina’s history.

Robertson Millpond is historic for an additional reason.  The pond is the headwaters of the Robertson’s Pond and Buffalo Creek floodplain.  It is said that buffalo once migrated to the creek to drink, thus the name Buffalo Creek.  This area is designated as a Natural Heritage Site by the North Carolina Natural Heritage Program.  The NC Natural Heritage Program’s mission is to identify areas of “land or water that is important for the conservation of the natural biodiversity of North Carolina.”  Nature Preserves Act (G.S. 113A-164.1 to 164.11) Robertson’s Pond and Buffalo Creek are unique because it contains the westernmost Blackwater swamp in North Carolina.  Typically Blackwater swamps are located in the coastal plains of North Carolina.  The unique biological characteristics of Robertson’s Pond created an ecosystem that supports bald-cypress, a rarity in the Piedmont.  The site also contains some rare amphibians, such as the four-toed salamander.  As important, it provides a breeding and migratory sanctuary for several species of birds, including wood ducks, anhinga and woodpeckers.  With the rapid rate of urbanization in Wake County and surrounding areas, bird sanctuaries are diminishing at a corresponding rate.  The preservation of Robertson Millpond protects a part of North Carolina’s natural history.