Sacajawea State Park is located just south of Pasco at the junction of the Snake and Columbia Rivers. It is named after Sacajawea, the Shosone woman who was a member of the Lewis and Clark Expedition (1804-1806), which was tasked with heading west to find a passage to the Pacific Ocean and to strengthen American claims to the newly purchased Louisiana Territory (1803). The expedition camped here from October 16-18, 1805. The site is also the beginning of the Sacajawea Heritage Trail. An interpretive center features exhibits that describe the history of the expedition, what they did here, and Sacajawea's role in the expedition. The park also features trails, picnic areas, boat docks, and a water trail campsite. The interpretive center other buildings are historic, as they were built by the Works Progress Administration (WPA), a federal agency that provided jobs to Americans during the Great Depression (see below). The park was added to the National Register of Historic Places in 2007 for its association with the expedition and the historic buildings. 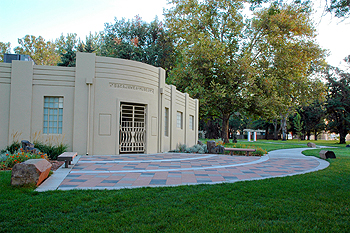 In 1803, the United States purchased the Louisiana Territory from France. The territory was a huge swath of land in the center of the the country stretching from Louisiana to Montana. President Jefferson spearheaded the expedition and chose Captain Meriwether Lewis to lead it. Sacajawea served as the expedition's interpreter and was accompanied by her French-Canadian husband, Toussaint Charbonneau. In addition to wanting the expedition to find a safe passage to the Pacific Ocean, Jefferson also wanted Lewis and Clark to study and record the geography and flora and fauna of the lands they crossed.

The expedition began on July 5, 1803, the date when Lewis left Pittsburgh down the Ohio River. Clark and other men later joined him in Kentucky. They reached a site (Lewis and Clark State Historic Site) in present-day Hartford, Illinois on the Mississippi River and set up a camp. During the next five months, they recruited more men and made other preparations. Finally, the expedition officially set off on May 14, 1804. As noted above, they reached what is now Sacajawea State Park on October 16th. They camped for two days, exploring the area and trading with the Indians they encountered. At this point they were still heading to the Pacific Ocean, which they finally reached on November 7th.

Where the park is now was once the site of a small town called Ainsworth, which the Northern Pacific Railroad established in 1879. Northern Pacific moved its operations a couple of mines to the north a few years later, however, forcing everyone in Ainsworth to relocate to what is now the city of Pasco. The park was founded in 1927 after land was donated to the local chapter of the Daughters of the Pioneers of Washington (an organization female descendants of pioneers who settled in Washington). The chapter eventually placed a historical marker where the expedition campsite was located.

The state acquired the property in 1931 and designated it as a state park. The WPA began to develop the park in the mid-1930s. The interpretive center, which was built in 1941 as a museum, and other buildings were designed in the Art Deco style. After the McNarry Dam was built in 1953, portions of the park were covered under water. New facilities were built on the Snake River side of the park as a result. The interpretive center was renovated in 2007.