The Wenatchee Valley Museum and Cultural Center preserves and promotes the natural and cultural history of the Valley of the mid-Columbia, starting from the ancient Clovis people who lived here 11,500 years ago to more recent times. Exhibits cover Native American culture, pioneer, and turn of the century life, the apple industry, and there are also changing art and cultural exhibits. A fun highlight is a model train of the Great Northern Railway crossing the Cascades. The museum is located in two historic buildings: the former post office and annex. 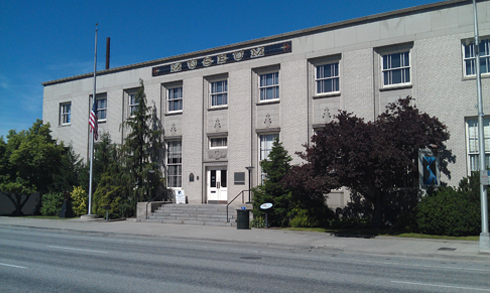 The Wenatchee Valley Museum and Cultural Center’s mission is to gather, engage, and educate people to celebrate and preserve the history, arts, sciences, and rich diversity of our region. The museum is a 501(c)(3) nonprofit organization that operates with the support of the cities of Wenatchee and East Wenatchee.

The Museum is proud to share a variety of exhibits interpreting life in the Valley of the mid-Columbia dating back to the Ice Age. From 11,500-year-old Clovis points discovered in an East Wenatchee orchard through trade goods used by Native Americans in centuries past to household articles used in Wenatchee homes around 1900, the past comes alive at the Wenatchee Valley Museum. More recent history is highlighted as well: the landing in Wenatchee of the world’s first trans-Pacific flight in 1931; a comprehensive look at Washington’s apple industry; and ever-changing art and cultural exhibits in our Main Gallery. Coyote’s Corner, with hands-on art activities, and the working model of the Great Northern Railway crossing the Cascades are a hit with kids of all ages.

This complex of two buildings- the former federal building and post office- represent the best examples of federal architecture in Wenatchee. The first federal building was built in 1917 at the corner of Yakima and Mission streets. It housed the post office until 1937 when the second building was constructed. The first building then became known as the post office annex and housed many federal offices, including the U.S. Department of Agriculture. The basement of the annex building, filled with giant refrigerators and laboratories, bears slight witness to the pioneering research done in North Central Washington in the field of controlled atmosphere storage.