Constructed in 1906 for Jefferson Security Bank, this distinctive Beaux Arts style building was one of Shepherdstown's leading downtown banks until 1975. In that year, the bank completed construction and moved to a larger building at Washington and Princess Street that could accommodate drive-thru baking. Jefferson Security continues to operate, and is the oldest bank in the county, having been established in 1869.

This building served as the headquarters of Jefferson Security Bank from 1906 to 1975. Photo by Ric Dugan 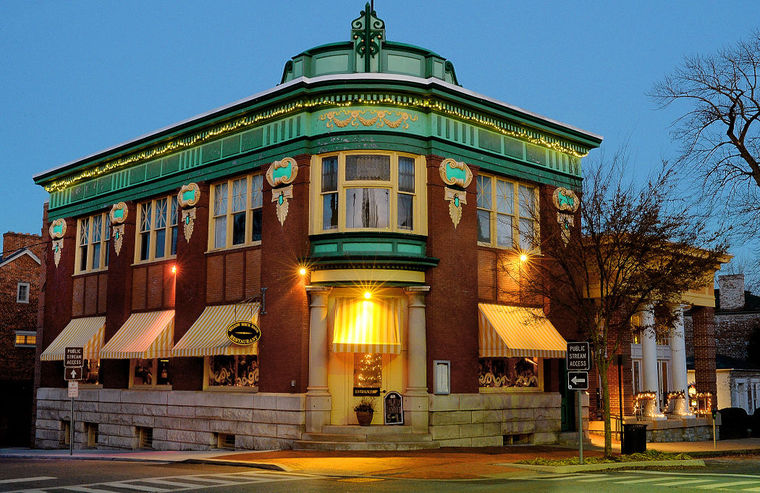 Jefferson Savings Bank opened for business in 1869 in this building at corner of Church and German Street.

Jefferson Security Bank opened its doors on May 19, 1869 and was originally chartered as Jefferson Savings Bank. The Bank changed its corporate name to Jefferson Security Bank in 1909. The bank operated from 1869 to 1873 at what is now a personal residence at Church and German Streets. In 1873, it moved across the street to the Billmeyer Building. The construction of this building in 1906 accompanied an era of growth and optimism, with many believing that Shepherdstown would become an important regional center of commerce. In 1975, the Bank wanted to expand to add drive through services, so they moved to the corner of Washington and Princess Streets. The Bank opened its first branch on 1986.

Kevin Connell purchased the building in 1976 and operated Yellow Brick Bank restaurant in the historic bank building until 2015, when he began leasing the building to a local Mexican restaurant chain.