Established in 1907, New York City's Japan Society is a nonprofit organization which promotes mutual understanding between Japan and the United States. The Society offers programs in business, language, education, public policy, and the arts. Film screenings, theatrical and musical performances, lectures, classes, and a public art gallery are also offered at the Japan Society's headquarters. 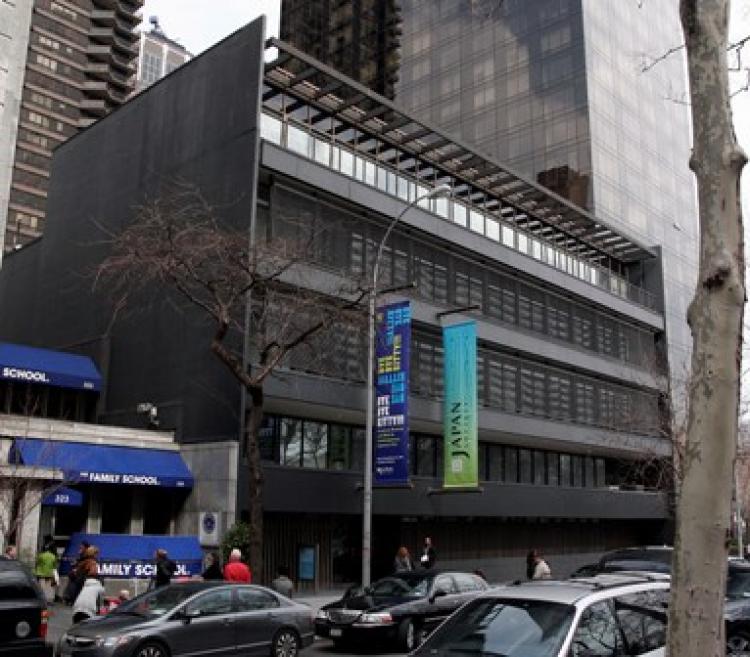 Inside Japan House (image from inhabit.com) 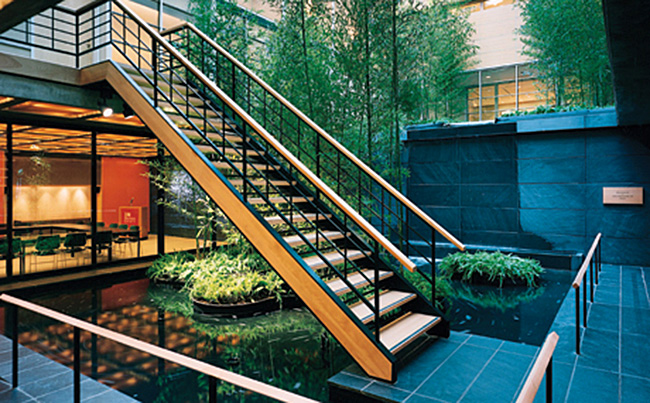 Japanese General Kuroki and his wife visited New York City in 1907, two days before the Japan Society was established (image from the Museum of the City of New York) 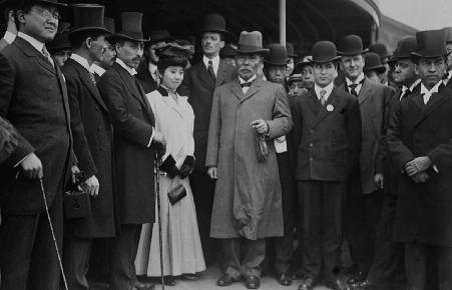 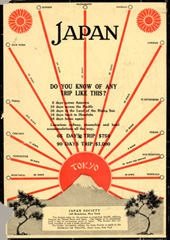 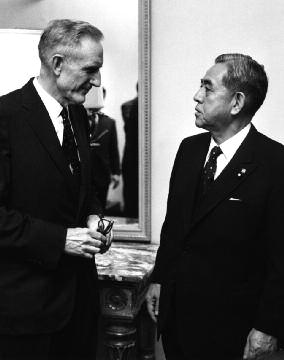 Architect Junzo Yoshimura with one of his drawings for Japan House, 1970 or 1969 (image Copyright © Japan Society)

Between the 1850s, when American and Japanese trade opened up, and the turn of the twentieth century, most Americans knew little about Japan, and vice versa. The relationship between the two countries during the latter half of the nineteenth century was one of mutual respect and beneficial trade. At the beginning of the twentieth century, Japan was America's largest trans-Pacific trading partner but had also become a potential rival as both nations sought to expand their spheres of influence in the Pacific and in China. When an influx of Japanese immigrants arrived in California from the recently-annexed U.S. state of Hawaii, the school board strained relations with the Japanese government by attempting to segregate Japanese and Korean children from American students. Though President Theodore Roosevelt spoke out against the school board and the motion ultimately failed, it became apparent that improved understanding between Japan and the United States would be beneficial.

The Japan Society's objective, throughout its history, has been "the promotion of friendly relations between the United States and Japan and the diffusion among the American people of a more accurate knowledge of the people of Japan, their aims, ideals, arts, sciences, industries, and economic conditions," [1; 2]. Membership was open to men and women alike, with an executive committee formed of Japanese and Americans "prominent in public or social life, science, art, or literature," [2]. The membership of 1907 was over 100 and had climbed to around 800 in 1912. Though most activities of the early years were social, but continued tensions on the West Coast in response to Japanese immigrants during 1907-1908, as well as Theodore Roosevelt's "practice cruise" of a U.S. battleship fleet in the Pacific, highlighted the importance of the Society's broader aims.

The Japan Society's Committee on Arts and Literature was created in November of 1910, and the following year saw the beginning of the Society's lecture series, with speaker Toyokichi Ienaga addressing "The Positions of the United States and Japan in the Far East," and Frederick W. Gookin speaking on "Japanese Colour Prints." Gookin's book, of the same title, was the first book published by the Society (1913), and an exhibition of ukiyo-e prints was the Society's first art exhibition, held April-May of 1911. The Japan Society's first newsletter, Japan Society Bulletin, began in 1912, carrying news of political and economic events in Japan along with Society event announcements. Under the supervision of Yamanaka and Company's D.J.R. Ushikubo, a Japanese tea garden was constructed on the roof of the Hotel Astor. Tea ceremonies, lectures, and noh performances were held daily at the rooftop garden. By September, the Society had added to its programs a travel bureau, which began scheduling tours to Japan for the spring of 1913. The profits from these tours solved the mounting financial difficulties facing the Society, and it was able to sponsor speaker exchanges between Japan and the U.S., as well as officially incorporating and establishing its first headquarters at 165 Broadway.

Promoting Understanding Through Education and the Arts

Racial and political tensions between Japan and the United States increased during the 1920s and 1930s, and the Society worked to promote education and diplomacy, along with internationalist groups including the Carnegie Endowment for International Peace and the America-Japan Society of Tokyo. Some of the Society's activities during this time period included its first film screening (1922); the Japanese Literary Society's performance of Crimson Carnelia in Japanese (1922); fundraising of $117,000 for relief following an earthquake in Tokyo and Yokohama (1923); a radio broadcast of the Society's annual dinner (1923); a traveling exhibition of Japanese artifacts, slides, and accompanying lectures (mid-1920s); publication of The Art of Japan by Louis V. Leddoux; exchange and display of "Good Will Dolls" from American and Japanese schoolchildren (1928); assistance in the publication of Art, Life, and Nature in Japan by Professor Masaharu Anesaki (1929); and an exhibition held at the Century Club, About Japan: Japanese Paintings, Aspects of Japanese Art and Culture.

With the Japanese attack on Pearl Harbor on December 7, 1941, the Japan Society suspended all activity. The Society reopened at the end of American Occupation of Japan in 1952, mainly thanks to John D. Rockefeller and Douglas Overton. The first major postwar function was a dinner held in honor of Japan's new ambassador to Washington, Eikichi Araki. Rockefeller and Sigeharu Matsumoto established the International House of Japan (I-House) and the Intellectual Interchange Program to promote the exchange of Japanese and American thinkers in art, literature, law, and political science. Intellectual Interchange Fellows included Robert Oppenheimer, Eleanor Roosevelt, Paul Tillch, Fusae Ichikawa (leader of the women's suffrage movement in Japan), novelists Saul Bellow and Shusaku Endo, poet Makoto Ooka, and many others.

The Japan Society established a performing arts program in 1953, hosting its first performance, "Kabuki by the Fujima Sisters and Noh by the Students of Moravian College for Women." Publication of the Japan Forum newsletter began in the same year, as did a Society-sponsored television program on Japanese arts. Scholarships and aid were offered to Japanese exchange students and to American students studying in Japan. During the 1950s, the Society supported a Japanese art exhibition and a kimono exhibition at the Metropolitan Museum of Art, a woodblock exhibition of the works of Toshi Yoshida, a display of Japanese utilitarian arts at East River Savings Bank, calligraphy and contemporary print exhibits, dance and opera performances, musical performances including one by Yoko Ono, and a lecture on the lives of women in Japan. The Society distributed documentary films and information packets on Japan for use in American schools, promoted U.S. premieres of Japanese films, established translation services, and published Herschel Webb's Introduction to Japan, Donald Keene's Anthology of Japanese Literature, and Harold G. Henderson's An Introduction to Haiku.

Expansion and Establishment of Japan House

The 1960s were equally productive for the Japan Society, which was cited for "outstanding accomplishments in the arts," [4] by the Parsons School Alumni Association. Major projects of the decade included Japan Week at Philharmonic Hall in Lincoln Center, featuring nightly concerts by the Toho Gakuen String Orchestra, and a series of half-hour television shows on the arts of Japan, including Koto, Folk Dance, Noh, and Wood Block. The Society also became involved in the business, policy, and media conference, U.S.-Japan Conference on Cultural and Educational Interchange. In addition, the Society moved into its own building, Japan House, designed by Junzo Yoshimura, in 1969. Japan House officially opened on September 13, 1971--the first building by a leading Japanese architect in New York City.

Facilities of Japan House include indoor gardens, a reflecting pool, a gallery, an auditorium, a library, and classrooms, which allowed the Japan Society to hold its own exhibitions, performances, and screenings, as well as language classes and lectures. The Society offers a Business and Policy Program, Education and Family Programs, a Film Program, Japan Society's Gallery, the U.S.-Japan Innovators Network, the Toyota Language Center classes and workshops, the Performing Arts Program, and the Talks+ Program for discussions on social issues, aesthetics, consumer culture, and technology.