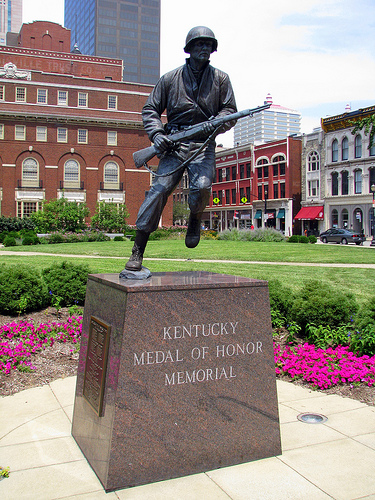 The Congressional  Medal of Honor is the highest award that can be bestowed upon a military service member, and is traditionally presented by the President of the United States to the recipient in the name of Congress. In 1861, Iowa Senator James Grimes proposed the Medal of Honor to be bestowed upon sailor and marines in the department of the Navy that distinguished themselves as exemplary.  In 1862 Massachusetts Senator Henry Wilson proposed a similar action for the Army. On July 12, 1862 S.L.R. No. 82 was signed by President Abraham Lincoln and the “Medal of Honor” was born. The Medal itself is an inverted five point star and has three versions for the different branches for the military that can be seen today. The first Medal of Honor was awarded in 1863 to Private Jacob Parrot serving in the U.S. Army from Ohio during the Civil War.

The Kentucky Medal of Honor Memorial is located on the Jefferson County Courthouse lawn in Louisville, KY. It was funded in the year 2000 by Jefferson County Commissioner Russ Maple who served in the 82nd Airborne Division of the U.S. Army and U.S. Air Force. The monument was funded by donations that matched the $75,000 cost. The Sculpture was created by artist Doyle Glass of Texas. The base of the monument is engraved with the names pf every Kentuckian who received the Medal of Honor while serving in the United States Armed Forces.