This Greek Revival building was constructed by Rezin D. Shepherd in 1859. The building was intended to be a Town Hall, when the center portion of the building was constructed. The building was used as a hospital in the Civil War, and for a few years, it was used as the county seat because of the devastation in Charles Town. When is became the county seat, the two wings were constructed. With the support of Shepherd, this building was leased to the new school and later deeded to the college's Board of Trustees. This became the first building of what later became Shepherd College (Shepherd University today) when it was established in 1871. The following year, the college was incorporated into the state of West Virginia's system of higher education as one of the state's six normal schools.

McMurran Hall was the first campus building of Shepherd University when it was a state normal school. 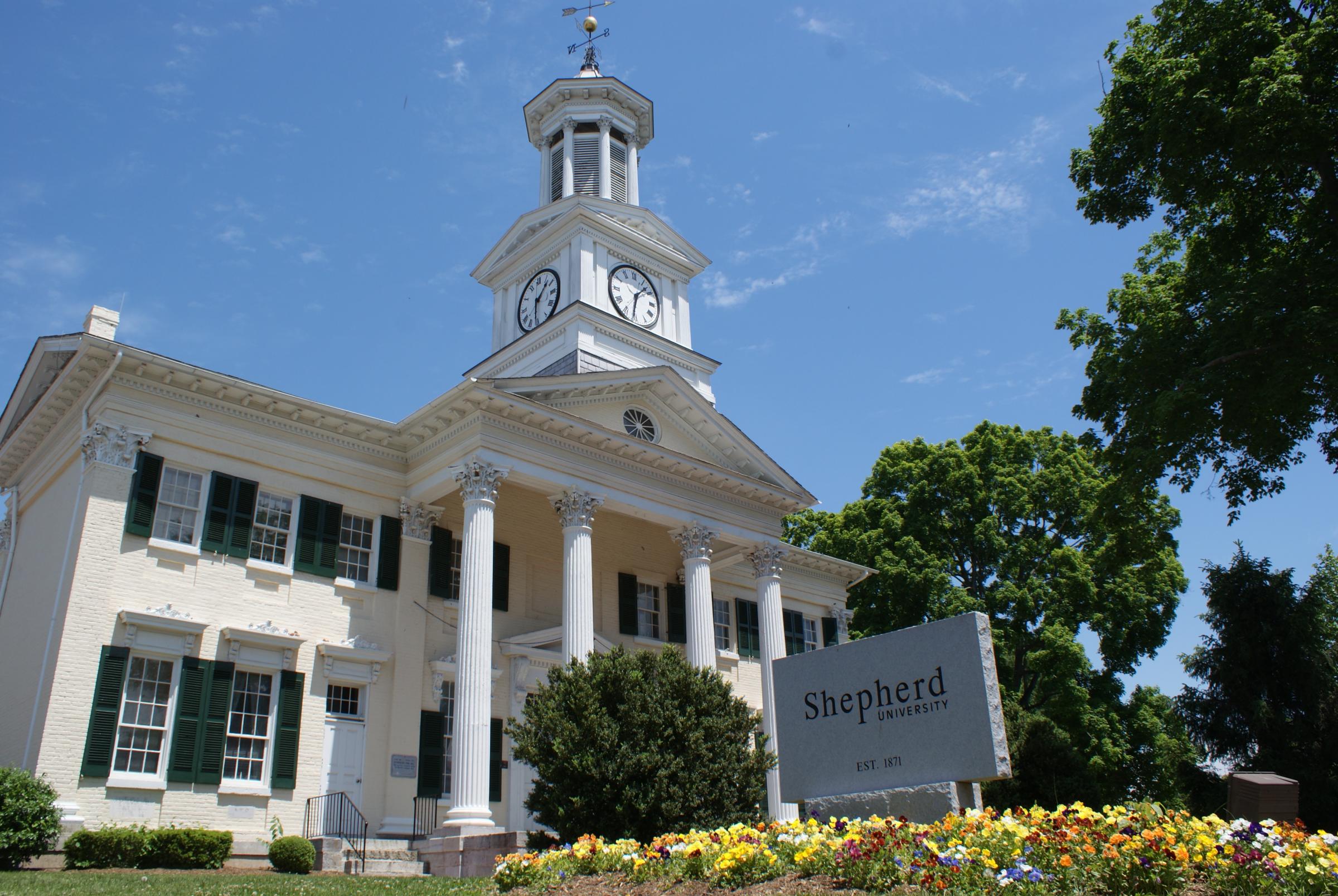 This historic photo depicts the building in the late 19th century when it was the primary academic building. 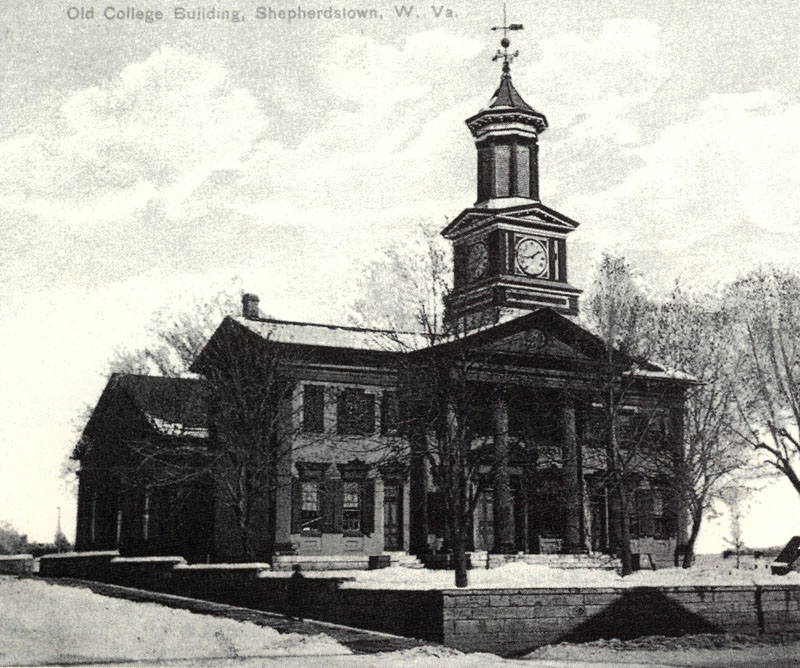 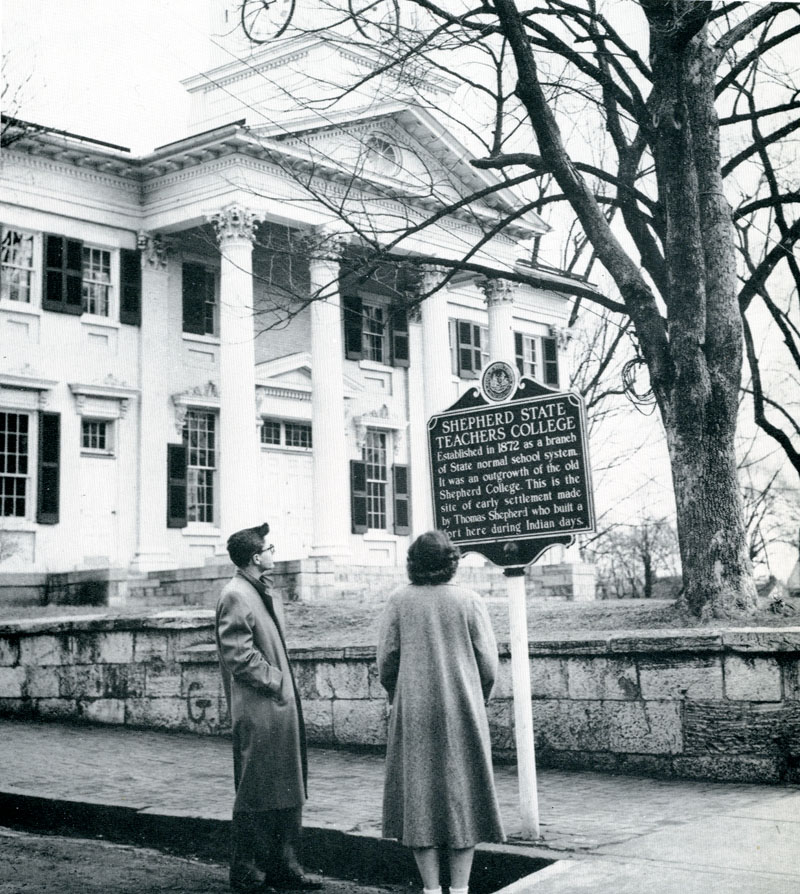 McMurran Hall as the Town Hall from 1860-1865. From Shepherd University's Historic Tour 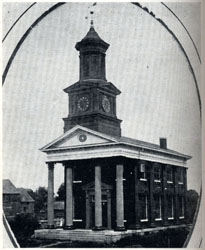 The building was constructed by Rezin Davis Shepherd, the great-grandson of town founder Thoams Shepherd. Rezin Shepherd became a wealthy New Orleans landowner and businessman in the early 1800s but also maintained a residence in Shepherdstown and hoped to promote the building that bore his family name. In that spirit, Shepherd began building this impressive Greek Revival building in 1859 with the intention that it would become city hall, this consisted of only the center portion of the building. The clock in McMurran Hall Tower was also a gift of Rezin Shepherd, but not initially for the Town Hall. The clock was given to the Trinity Episcopal Church in 1842, but it was removed and relocated to McMurran Hall in 1860. Construction in the stone wall around the building also started, it was made from stones on Rezin Shepherd’s farm. Construction was halted by the Civil War.

After the Battle of Antietam, the building was used as a hospital for the wounded. Mary Bendiger Mitchell tells how McMurran Hall transformed after the Battle in her essay "A Woman's Recollections of the Battle of Antietam" found in Battles and Leaders Vol. II. She says "The unfinished Town Hall had stood in naked ugliness for many a long day. Somebody threw a few rough boards across the beams, placed piles of straw over them, laid down single planks to walk upon, and lo, it was a hospital at once."

The war's toll upon the former county seat of Charles Town necessitated a move of the County Seat. In February, the Jefferson County seat was moved to Shepherdstown, to McMurran Hall. This led to the construction of the two wings on each side of the building. When the county seat move back to Charles Town, the building was left vacant. The town asked the Shepherd family if they could use the building to start a school, becoming Shepherd University. The college leased the building until 1891, when Shepherd Brooks, grandson of Rezin Shepherd, deeded the property to the Shepherd College Board of Trustees.

The building held offices and classrooms for many years but like many early campus buildings, this structure is no longer used for instruction. Today, the building is home to the offices of the University's Foundation. The building was named in honor of Joseph McMurran who served as the school's first principal when it was a normal school.